I was putting my bike in the car after a ride a few weeks ago when I noticed something very disturbing. The body of one of my brakes (Avid Juicy Ultimate) was cracked at the clamp. I took it up to Bikes Plus, and Chris took one look at it and got on the phone with SRAM to talk to them about fixing it under warranty. They said they would, but that the parts were backordered, so it would be nearly a month. That’s a loooong time to be without a brake, so he kept my bike and hooked a spare brake up to it for me a couple of days later. Rock on!

A little time passes… Chris talks to SRAM some more and it turns out that the replacement brakes they want to send are black- not white/red like the ones I’ve got. I let Chris know that if that’s the only possible solution that I’ll deal with it, but that the white ones were an extreme vanity purchase and that I’d be pretty dissapointed (in SRAM, not in the shop) if I had to have black brakes. He said he’d see what he could do.

So, a few days later, Chris calls me up. He’s been pestering SRAM every day about my brakes. They are going to send out a set of the brand-spankin’-new Elixer CR brakes… in white/red! Monday morning, I take my bike up to the shop, and he hooks up the new brakes. They are freakin’ SWEET!

I’m incredibly appreciative of this. They could have easily just left it at “you’re getting black replacement brakes, and that’s all we can do,” but they went above and beyond the call of customer service to help me out. You guys are great! 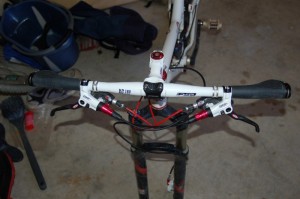 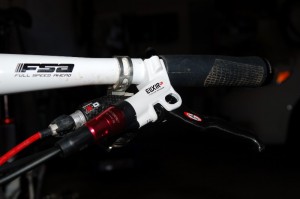 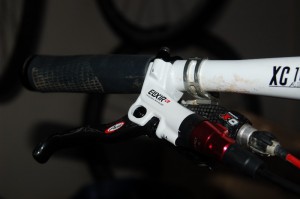