The Spot Rocker is, hands down, the most fun-to-ride hardtail I’ve ever owned. Whether you want to ride geared, chained SS, Gates Carbon Drive SS, or Carbon Drive with an internally geared rear hub, I’d highly recommend it. Short chainstays are pretty great.

On Saturday, I raced the Battle the Bear race of the Rocky Mountain Endurance Series. I wasn’t surprised to be the only singlespeed lady lined up. So, I figured I’d do my best to ride a steady and hard pace all day. I may have been a tiny bit conservative for a race-pace day, but I count it as a successful hard day of training. 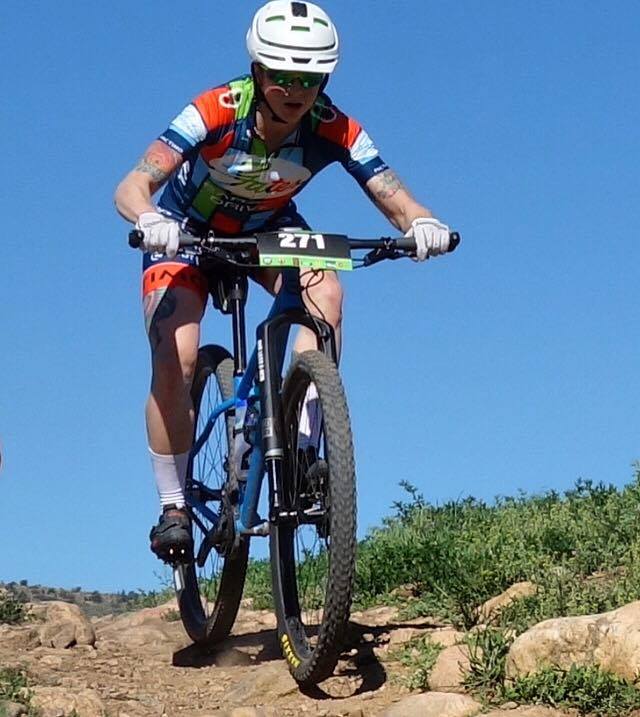 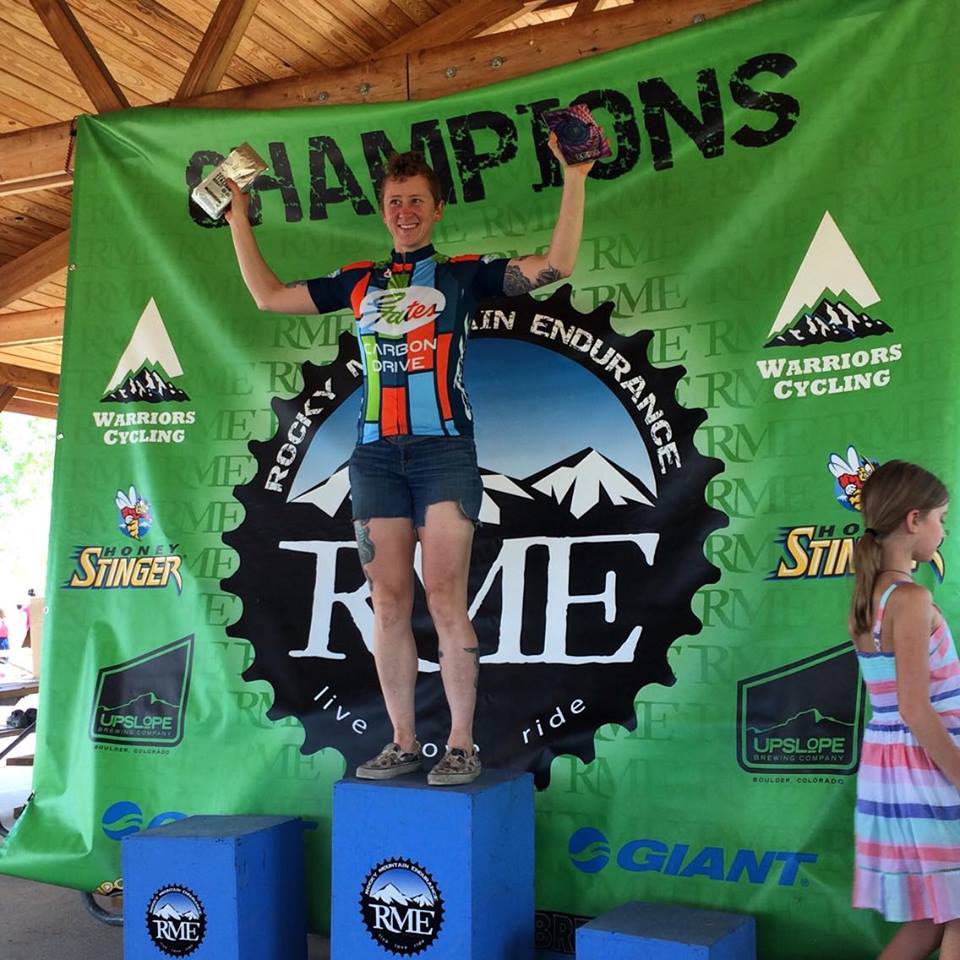 What the podium picture doesn’t show, and what went largely unnoticed (as far as I could tell), was that I was also second place overall in the women’s times (15 minutes slower than pro racer Megan Carrington).

At least I won the podium jorts competition.

Sunday following the race was time to pack in preparation for Monday-move-to-Salida day. Moving is absolutely exhausting, both mentally and physically. Luckily, I had the help of Matt and Levi. Matt and I packed up a U-haul load of house and drove it over to Salida Monday afternoon. After packing some stuff in to a storage unit, we dropped the rest of it over at the house where I’m staying for the next few months.

In lieu of driving Matt back to Denver (he’s working a Mountain Bike Radio job for the summer), our best Arkansas-transplant buddy Levi came over to ride a little and drive Matt back to Lakewood. 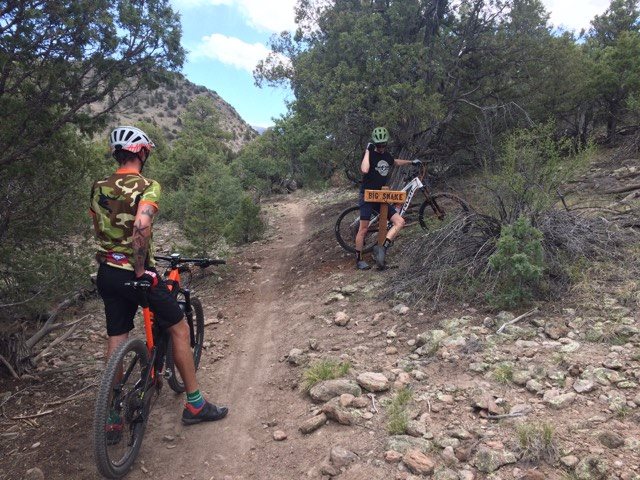 Life in Salida so far is absolutely amazing. I almost can’t believe that I’m living here. I worked Wednesday and Thursday, then went for another ride up to the Cottonwood and S-Mountain Trails today. 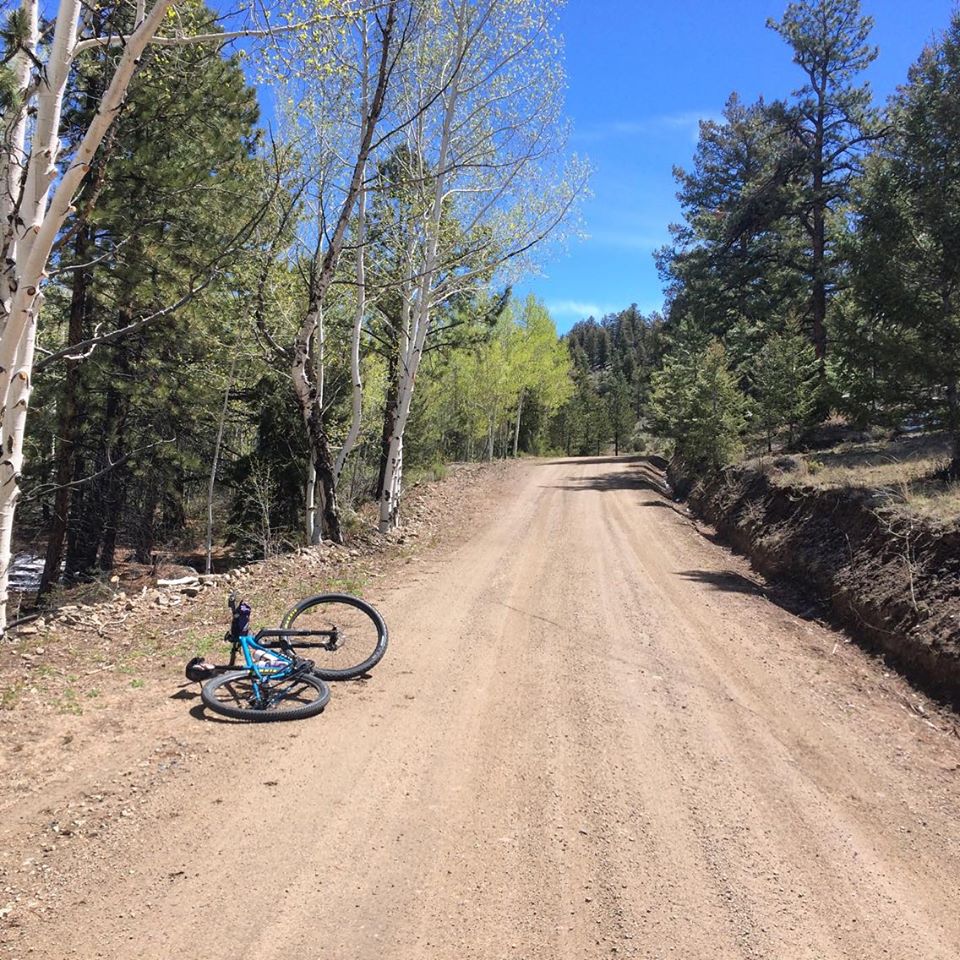 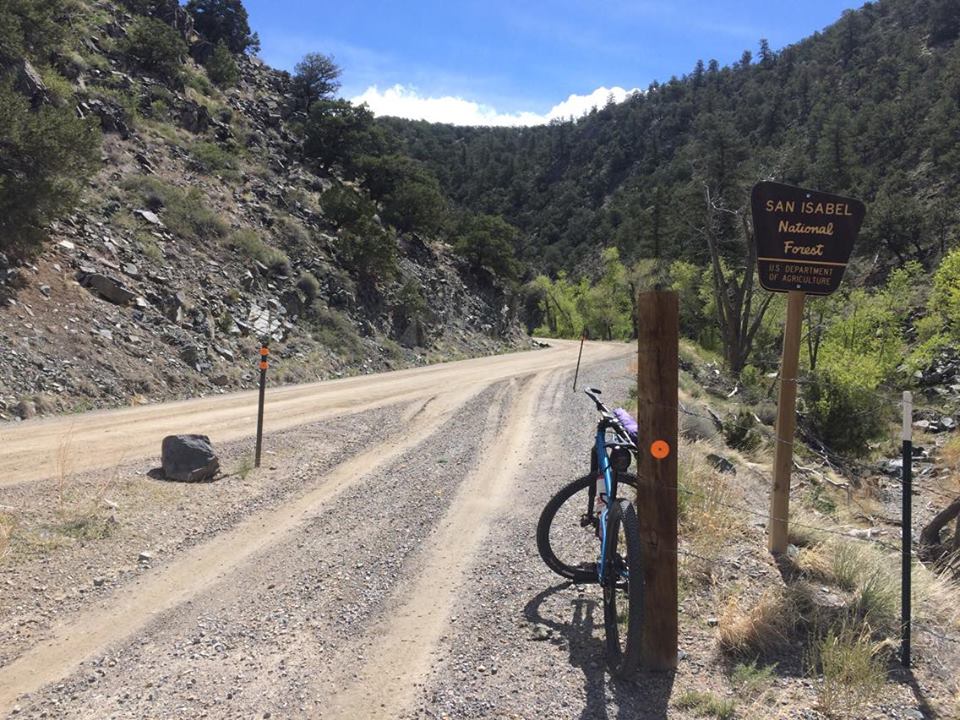 I can ride prettymuch anywhere in town, which means that since I got here, I have driven a total of 5ish miles. The Surly is on car duty now. I rode the bike path to Wal-Mart last night. 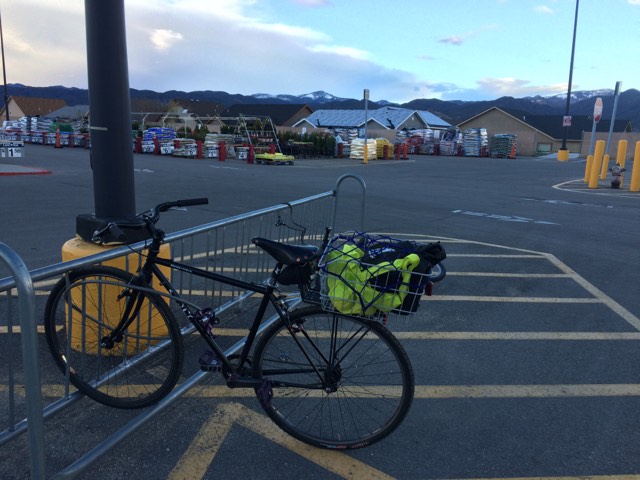 The ride today was beautiful. County Road 175 is my new Apex Valley Road (Apex Valley was the “road to adventures” in Black Hawk when I first moved out to work at 92Fifty).

I’m old enough to be cynical about having an optimistic outlook on new things, but I have a feeling it’s only going to get better from here. 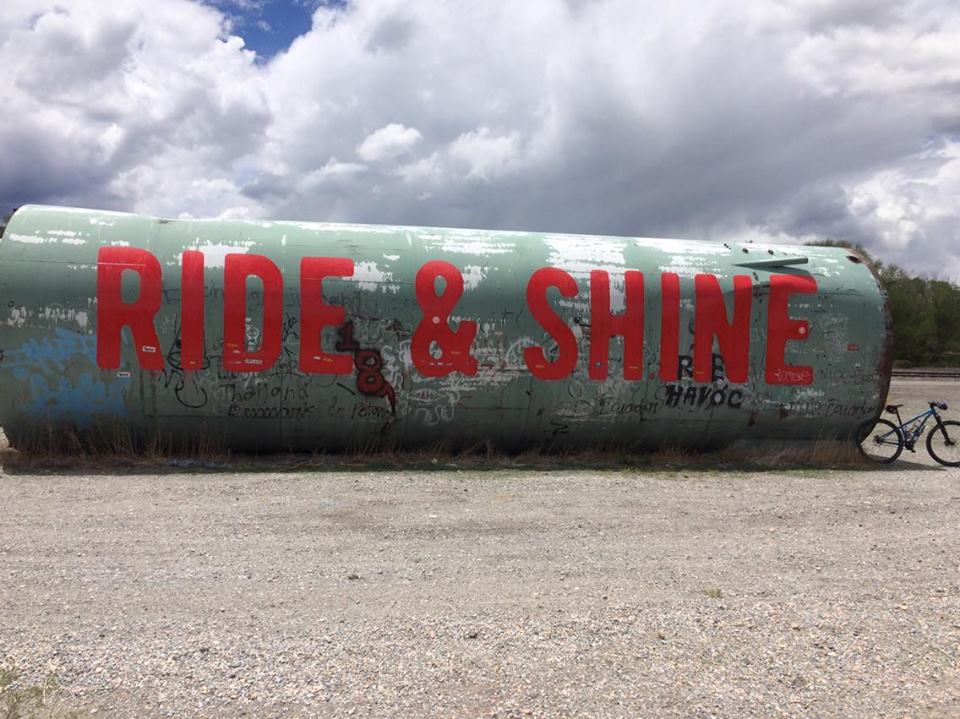 Some people can’t stand to have a routine. I’m not one of those people. When I don’t have some sort of a reoccurring responsibility, I end up drifting and getting nothing done. So, the advent of yoga class at 10(ish) every morning, has been a good thing for me.

Lately, the trails have stayed pretty wet (or frozen, in the case of last week). It’s generally been cold and damp for a while. I’ve been able to ride my road bike with one or two friends over the past couple of months, but I’m basically done riding it alone for the foreseeable future. As a result, my strategy for training is to do intervals on the trainer three days a week and get over to Syllamo for longer/more challenging rides. It’s not ideal, but it’s the best I can make of my current situation.

I did make a break from my routine on Monday. For a while, I’ve wanted a different vehicle. The Element is practical in that it holds lots of stuff and is coated in rubber, but it’s basically a miniature cargo van, and drives accordingly. After perusing current and recent model vehicles with Ryan (he’s still shopping around for something to trade for his 2003 Escape), I came to realize that the trend of making everything larger and fancier (full of electronics and whatnot) really picked up after 2011ish (at least in the cars I’m interested in).

Monday morning, I decided I’d shop around to see what the internet had to offer. I’ve always been drawn to Subarus because of their all wheel drive and their tendency to last FOREVER. However, they’ve followed the pattern of making all the wagons SUV-sized over the most recent models. While I was shopping, I found that City Auto (a high-volume used car lot) had several older Subarus in stock. I was intrigued, and, after exchanging a few texts with Ryan to get a budget, I cleaned out the Element (just in case) and headed out to take a look.

Oh yeah, and it was about 40 and raining outside. Perfect.

When I started talking to a salesperson, he printed out Carfax reports for the cars I was interested in. My first pick was an Outback. However, the report showed that the majority of its 90k-something miles were in Pennsylvania. I immediately ruled that out for fear of salt-related rust and corrosion. The salesman suggested checking out a 2007 Impreza wagon that was on clearance (they actually had 2 of them- an automatic and a manual). It had 86k miles on it (that’s just getting warmed up in Subaru/Honda worlds… the Element turned over 130k the week before) and was slightly less cargo room than what I’d intended, but wasn’t dissimilar to what I had in the Honda Fit back in the day.

I didn’t want to admit it, but on the test drive, I fell for the all wheel drive at the first stoplight. Rain doesn’t matter.

So, after a brief and painless haggle, I was happy with what they offered for the Element trade (it was exactly the Blue Book price I’d researched given the high mileage, broken windshield, and lots of dirt and body scratches), and subsequently satisfied with the overall out-of-pocket expense as well (the car, tax, tag, their processing fee, etc). It ended up being right in line with what I’d seen them selling for privately and included a 1 month/1000 mile powertrain warranty, which is slightly more peace of mind with a used car. Knowing an exact budget and having an idea of the private cost of what you’re looking at ahead of time makes asking for exactly what you expect much easier. 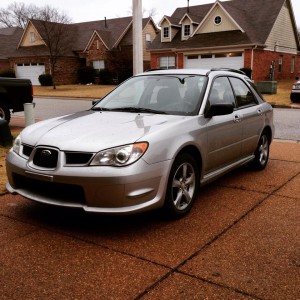 After driving around in an Element for 5ish years, this thing feels like a race car. I’m likely to either get it stuck in mud or get a stern talking-to from a police officer at some point in the near future… especially since I’m heading over to Syllamo tomorrow morning for a big Trail Work day on Saturday.

A couple of days ago, I was on my way home from riding and saw a pile of bikes propped up next to a trash can. One in particular caught my eye- it was a bright blue geared bike of some sort with moustache handlebars. Noone was at home, so I left a note at the house asking if I could come back and get it. Later on that afternoon, the homeowner called back and said she didn’t mind at all, so I brought this home: 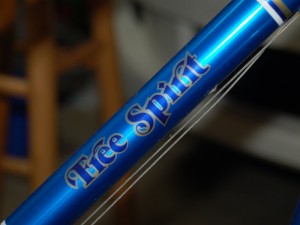 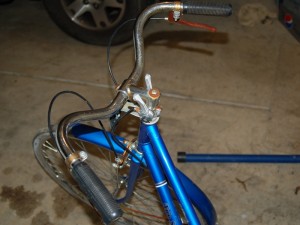 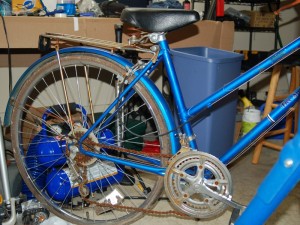 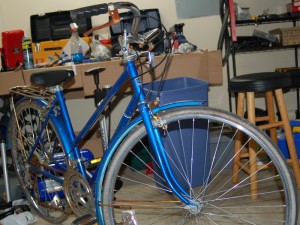 As luck would have it (for the bike, at least), the next day was cold and rainy. I spent most of the day with some rust remover and steel wool trying to get rid of a majority of the rust. I also dropped by the bike shop & picked up some new cables and a chain. After a day of dissassembling/reassembling, here she is… 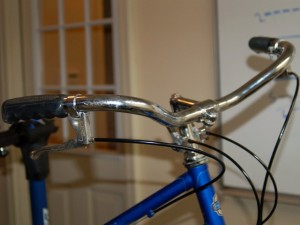 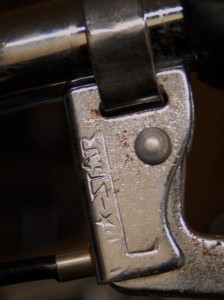 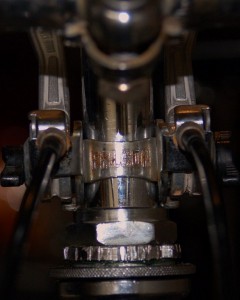 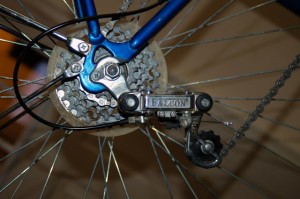 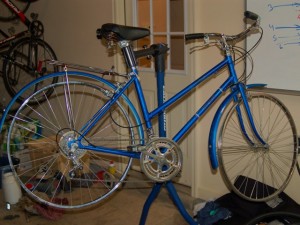 The only thing I was worried about not working with the restoration was the front of the drivetrain- seems it took a hard fall on the drive side that bent everything up enough that the chainrings wobble as the cranks turn. It took a LOT of fiddling with the high/low limit screws, but I finally got it to work (though it’s still pretty noisy and not incredibly smooth). Now I’m waiting for a set of new tires (the old ones were rotten beyond recognition) from Harris Cyclery (the rim size is an odd one- 26 x 1 3/8). I plan on strapping some milk crates to the rack and turning her into a grocery getter. Hopefully once they get here, I’ll get some good out-of-garage photos!

So I was just there to watch since I figured out on Monday that it’s not wise to try dismounting your bike at speeds greater than which you can run. I managed to get a few photos in the dark- here are a couple of my favortires… 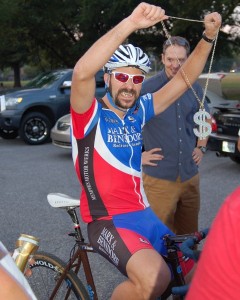 Some dirty hippie in a gay sweater: 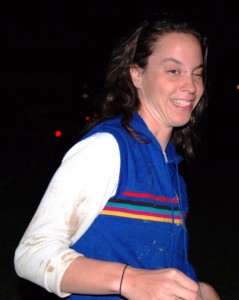 I was on my way home from work today (on my bike), when a beige Cadillac all but buzzed me in slow motion. I was a little miffed, but saw the handicap hangtag on the rearview and chocked it up to elderly driving. I continued up the road, approaching a stoplight at a busy cross-street. As I’m pedaling through the green light, I hear “Ma’am!” from my right , and see that the driver of the beige Cadillac has parked in the right lane of the busy cross street and is standing behind her car waving at me! I continue through the intersection and pull over to the gutter on the other side to find out what this woman wants.

The first thing I hear her say is “What are you doing all the way out here?”

Her: “Are you Tim Taylor?” (I couldn’t understand her very well at that point, but she wandered into the street a little closer to me and yelled it a couple of times)

She starts trying to explain something to me, but I can’t hear what she’s saying because she’s on the other side of a busy road. By this time, the light has cycled, and she abandons her car on the side of the road and comes over to me. Apparently, she thought that I was her son, Tim Taylor, who lives in Midtown. He’s ridden a bike for more than 20 years, and she thought I was him.

Hmmm…
I know that it’s easy to mistake me for a guy from the back when I’m on my bike & wearing a helmet.
I know she said Ma’am when she was trying to get my attention.
I am confused as to how she thought I was her son while driving by and pulled over, used a female term to get my attention, then once again asked if I was Tim Taylor. Is he a transgender of some sort? I’m confused. I doubt that Tim’s bike is as ugly as the Mule, though.

Tim, if you’re out there, maybe you should give your mother a call.

The commuter is finished! It’s definately not pretty, but it’s a perfect utility bike. I rode it to work & for general errands Monday-Wednesday this week, though I did drive today because of the storms moving through the area. Here’s a rundown of the parts:

And here’s the bike:

And yes, that is a 12 pack of Diet Coke bungee-corded to the rack :)