Stage 6 is a slightly more moderate stage, starting with a face-kick climb out of town, but then hooking in to Boreas Pass road, which gently slopes up to an aid station on the Continental Divide. From there, it drops down on the Gold Dust trail and loops back on another relatively gentle gravel grinder climb, back through the aid station, and down into town via Boreas Pass and some of the same roads/trails we’d climbed out of on the first day of racing. Basically, a giant figure-8.

Since Matt had helped me out so much during the week, I figured it’d be fun to meet him at the Aid Station and ride the back loop of the 8 together, treating him to one of the more fun descents and unique “channel” of the Gold Dust Trail without forcing him to traverse any stupidly steep or difficult climbs in the process. My GC lead was insurmountable, so I figured we’d just ride party pace and have a good time.

The start of stage 6 is a hammer fest up the bottom of Boreas Pass to get to the first section of trail (where the group bottlenecks and hits the granny gear). I was feeling my cross country/angry pace from stage 5 on top of the usual “6 days of racing” fatigue, so I didn’t do a good job with the hammering. I did go as fast as I felt able, though, and, as I had done before, I tried my best to grind up the steep spots rather than pushing. Eventually I made it out on to Boreas Pass and slogged my way to the top to meet Matt. I stopped to refill a bottle and he fell in with me to fly back down the trail.

We stopped once on the Gold Dust trail to help out a guy who needed a pump. On the enduro section following that, I realized that Matt may be having a bad day, because I dropped him going downhill (he’s got mad BMX kid skills, so he’s usually faster than I am). Once we were back on gravel and climbing back up to the aid station, it was confirmed- Matt was having altitude problems. Being the perennial momma bird, I stopped with him for a snack then towed him the best I could back up to the aid station. There, we handed out some Coors Lite (the PBR handup was already gone by then) and passed around a bottle of Red Stag. Matt rode off with Donna Miller and Devon Balet, and I took off to finish the course.

My favorite part of stage 6 is racing the whiskey to the bottom.

Later on that afternoon, we headed to the Quandry Grill for the awards banquet. 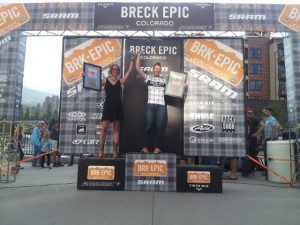 Susan and I were joined on the World Championship podium with the Angry Single Speeder. As you can see, Susan has her pinching fingers ready, and I’m hauling back for an Epic sized smack… 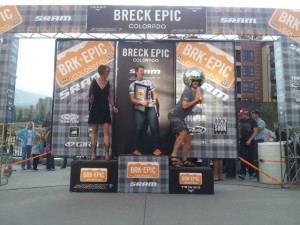 (of course, he’d given groping permission prior to his podium appearance)

While at the Quandry, there was much discussion of Stage 7 at the Gold Pan Saloon. Matt was feeling run down and drank a Red Bull and Vodka in an attempt to rally. However, as we sat later at the Gold Pan and the room started to get crowded, it was obvious that he was fading hard. He went and sat outside while I finished my drink and socialized with some of the nice folks from Osprey, who’d showed up for the Breck Bike Week expo. I went outside and found him sweating and looking pretty miserable on the steps of the building next door. So, I called off my stage 7 and we shuffled back to the condo.

The upside?  It did make Stage 8 (packing and driving) much easier.

The question of the night at the Quandry (via Matt) was, “how much would someone have to pay you to turn around, right now, and start riding the whole thing over again, backwards?” My answer? Nothing more than food and lodging. I loved nearly every minute of the race, and, if there were a 12 day version that included riding every course backwards, I’d do it in a heartbeat (I’m not sure if Mike McCormick, the race promoter, feels the same).

Now, as the winner of the official/unofficial Singlespeed Stage Race World Championships, I’m waiting on a tattoo appointment to get one of the “flowers” of my left arm tattoo filled in with world champion colors…