After my exciting start to the weekend in Arkansas, I drove back to Memphis Saturday afternoon so I could race Sunday morning. As usual, the weather for the Outdoors CX race was amazing (I’m sure it’s seen some bad weather in the past, but it hasn’t at least as long as I’ve been racing it). It was upper 50s and sunny, with a little north wind.

With the UCI-level race in Louisville the same weekend, the Outdoors race has taken a hit on people coming from Nashville to Memphis. However, we still get a few TBRA points chasers as well as a lot of locals and some people from Arkansas. Two other women lined up with me at the start. In the past, the ladies have started behind all of the B race- including the “B” masters men, who are generally on the slow side. While no one has ever given me a hard time about passing, it’s still a good number of people to work through. This year, Joe Royer (Outdoors, Inc. owner/Race Director) was kind enough to slot us in behind the Cat 4/5  and Singlespeed men and ahead of the Beginner Masters men (makes sense- our race is a TBRA points race, and the masters group isn’t). He also gave us the benefit of a mass start instead of leaving time gaps.

When the race started, it was a hammerfest. Guys who know they’ve got no chance in holding their ridiculous initial pace go all out like it’s a single lap race. I hammered my way through the scrum and took to picking them off as they blew up. I ended up catching a guy who I didn’t know. He was on a slightly dated bike and wearing an orange Trek jersey (seen in both photos, below). He stuck on my wheel for a lap, then I backed off a tiny bit and stuck on his wheel a lap. With the wind out of the north, the headwind was worst in the heaviest of the grass. So, after resting on his wheel for a lap, I attacked soon after we went back through that section. 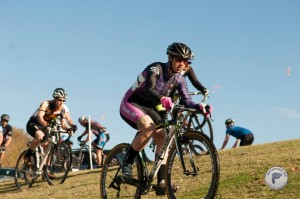 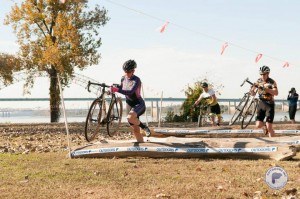 I got away well, but could tell he was trying to fight back, so I had to keep the hammer down as best I could for the last couple of laps. It worked out, and I finished first woman and somewhere around 5th or 6th overall. If I’d wanted a better overall finish, it would have taken a much better warmup and start than what I did (my only self-criticism for the day). 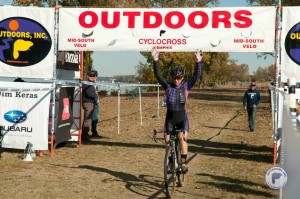 Joe has always been a big supporter of women’s racing, and, along those lines, no matter the size of the women’s field, it’s always an equal payout race. In addition to that, I won a slick Deuter hydration pack: 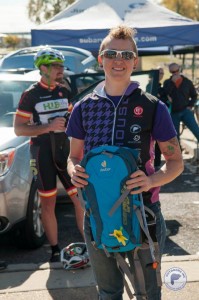 (All photos stolen directly from the Outdoors, Inc. Facebook Page)

As strong as I’m feeling, I can tell I might be on a little bit of a plateau. It’s working for me right now, but my post-season break after the State Championship in December is looking like a good time to kick back and let myself get slower for a minute before I start prepping hard for next season.

Posted in Bike Racing, Training
Hi, I'm Andrea! This blog is a journal of the highs, lows, and challenges in my constant search for adventure