Sometimes, things get too rad, and it’s a week between blog posts. What can I say?

First off, happy Father’s Day to my Dad. This pic sums him up pretty well… 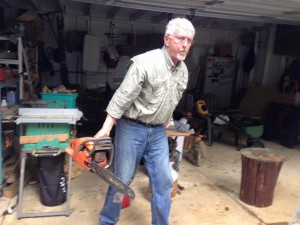 When I last talked to you, I had taken some time to rest and explore the nearby mountain. That Saturday, I took the gears off of my Cysco Cycles hardtail and, after getting some local advice, put a 34×21 gear on it (I was gonna do 32×20, but I somehow I landed here without my 20t cog). Sunday morning, I drove down to Castle Rock for the Beti Bike Bash. Honestly, I was going with the thought that I’d kind of get my ass handed to me, and that it’d be a good test of where I was stacking up against the supremely badass women who race in Colorado.

I got a little nervous. The last XC race I attended was last year’s TN State Championship race (where I was the only participant). Before that? Uhh… I don’t really remember. I’d never ridden the course, and I didn’t know the other 6 women who were singlespeeding, so my goals were to play it cool at the start and pace myself so that I’d be super consistent for all 3 laps.

The singlespeeders were the last group of 3-lap racers to start (behind 19 pro and more than 30 expert women). As we climbed the first short doubletrack humps before singletrack, I filtered in to 5th place. The course rolled at first, and I picked my way to about 3rd spot as we navigated a few slick turns and punchy spots. Then, the first climb. We swamped the back of the expert field. It was a battle of who could trackstand at every pitch to let racers granny gearing the switchbacks clear the way. It was incredibly tedious.

I eventually found myself behind the lead SS woman. I decided to stick around there for a few minutes and figure out her strengths and whatnot. Climbing- I had her. I think she was overgeared. Descending- pretty even. The combination of not knowing the course and dealing with the kitty litter turns (which I’m not that good at dealing with) made it basically a draw. So, on the next climb, I asked if I could get past, and she was nice enough to let me by.

I basically had to ride through most of the Expert field. Everyone was pretty nice about it. I’d ride up and politely say that I was the SS leader, and they’d move over and let me by whenever there was a good spot. It was still exactly 1.5 laps in before I had a clear trail ahead of me with no more passing. 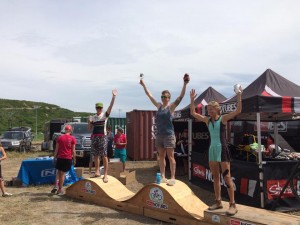 I was pretty amazed at how well I did. I won by a little more than five minutes, and my time was faster than all but one Expert woman, and would have been 12th in the Pro category. That’s pretty consistent with how I’d place when I was more “in shape” and at sea level. It’s a big boost to my motivation to get out and race a little more… which is good, considering that there are racing opportunities all over Colorado every weekend of July.

Next on the agenda- the Big Mountain Enduro race in Snowmass.

Posted in Bike Racing
Hi, I'm Andrea! This blog is a journal of the highs, lows, and challenges in my constant search for adventure