Saturday may just be the hardest I’ve ever raced an XC course. I remembered from last year that there were a few spots that I refer to as “singlespeed purgatory.” They’re one(ish) mile stretches of forest road that are nearly flat/slightly downhill- basically, places where singlespeeders will get swamped by geared riders between the singletrack that the road connects. If you look at the elevation profile on Strava, you can see them very clearly.

Go ahead. Look. The race report will make more sense that way.

My goal of this race was to go harder than I thought I could go and find out just how deep my fitness went. So, I warmed up for a while- riding a quick loop of the first climb/descent and eating some Roctane gel a few minutes before I lined up. I think my heart was pounding harder waiting for the race to start than it had the whole time I was warming up.

We started at the bottom of the ski hill, just like the hill climb. The course made its way up 450ft of gain in one mile up the ski hill road before turning on to singletrack, then quickly descending to singlespeed purgatory #1. The race started. I went H.A.M. After 8-ish minutes, I went in to the singletrack just a few bike lengths behind another woman. Thanks to my pre-riding, I caught her after just a few techy turns of descending.  I hauled ass down to the first purgatory, where, about halfway through, I was swamped by Yeti Beti pro Natalie Raborn.

Luckily, she didn’t put so much time in to me that I couldn’t catch her on the next singletrack descent. It was short, but took us in to one of the more techy spots, full of wet rocks and roots. She let me by when she had to foot-down a big, slimy rock when I was right behind her. I did my best to settle in and float through the next few miles of rolling descent.

From about miles 5 to 11, the course mostly climbed, with the exception of purgatory #2 from miles 8 to 9. I didn’t see or hear anyone until I was well in to that flat part, where I was promptly swamped by two pros and one expert racer. I was somewhat frustrated and feeling a little blown up from my starting effort, but I did what I could- eating more Roctane, drinking, and spinning as hard as I could between gulps.

I managed to keep one woman in sight and started to catch up to her on a section of trail (“Upper Chickadee”) that was new to the course (a re-route since a creek crossing in the original course was too high). It was a climby section of bench trail in some pretty tight trees. I felt right at home, and my comfort rewarded me with having the other women in sight when we dumped on to another forest road before the final steep climb of the day.

On that little bit of forest road climbing, I felt like I was at a standstill. I wasn’t gaining any ground, but I definitely wasn’t losing it. Then, at mile 11, we turned on to a climb called “Lonesome Whistle”- a super steep double track. Lucky for me, the little bit of rain the day before made it slightly less loose. I swamped the three women who’d passed me on purgatory #2.

Then came the dig. I didn’t know exactly what the rest of the course was, but I did know that I was at 1:08 in, and at the highest point. That meant that it was biased downhill for another 20-30 minutes to the finish. With purgatory #3 (a repeat of #1) in there, I knew I’d have to ride as brakeless as possible to put a sizeable gap between me and the racers just behind me and avoid another swamping where it was flat.

I hammered it as if it was the only part of the course I’d done that day. My right quad threatened cramps several times. I caught and passed several of the 50+ expert men that had started ahead of us. All of them were quick to give me room when I told them I was leading the women’s race (thanks for that, guys). If it was uphill, I was stand-hammering. If it was downhill, I was taking chances through the rocks and tight trees.

Then, the terrible, awful mile of flat forest road. I wish I still had a powermeter so I could see what sort of average cadence I was doing for that four minutes. It was like being in a nightmare where you’re trying to run from a monster/serial killer/tornado, but your body is stuck in molasses. I kept hugging the edges of the road, hoping to cut precious feet off of the curves and stay out of sight if at all possible.

I never saw anyone behind me as I went in to the last singletrack. It was another little bit of slimy, rocky/rooty mud and tech, which I rode through with smooth reckless abandon before it kicked out on to the last quarter mile of flat road to the finish. No one caught me. The next woman (an 18-year-old expert racer) finished just 30 seconds later, followed by the first pro woman 30 seconds after that. (you can see all the results HERE)

If I hadn’t ridden my a$$ off in that last 6 miles, I would have been toast. I felt like falling down at the finish line. I found some shade and just sat and stared off in to space for a good 15 minutes.

I did manage to rally for the Singlespeed podium (no mention of the overall at the podium ceremony, but whatevs). 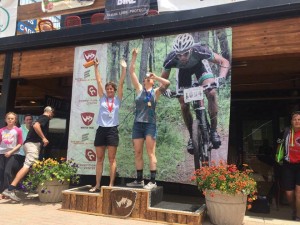 The next race is a couple of weeks away. It’s the “Rendezvous” course, which was my favorite last year and is waaaaay better for singlespeeding. Yesterday, I rode Super Walker before work to get a little overload on top of Saturday’s effort (spoiler alert- I bought a ticket for the Strugglebus… non-stop service to Struggletopia). I’ll probably do an endurance-paced longer ride on Tuesday and a short track race on Wednesday before backing off and recovering again for the next XC installment. It hurts, but the speed is totally worth it.