I picked a heck of a race for a first try at a singlespeed 100.

With a reported 13,719 feet of climbing- much of it on singletrack, the Breckenridge 100 is considered one of the hardest 100 mile races in the U.S. (and, yes, before you ask… even harder than the Leadville 100).

I arrived at Carter Park early and set up a small pit area, and soon enough people were gathering for the neutral rollout from the park to the beginning of the course. At 6:00am, we were off. Loop 1 started with the tallest of the climbs (a hair under 12,500 feet) over Wheeler pass (the same climb I was on a little over a week ago when I ran in to the insanity that is mountain weather). I did my best to pace myself on the way up. Even though I was feeling good, I walked the pitches of road that were redlining me.

Once we were off of the jeep road and on to Wheeler Trail, I had some bad luck. Going up one sharp uphill pitch, the guy in front of me stalled out. I tried to put my foot down, but the ground dropped away so steeply from the side of the trail, there was nothing to put it on, and I somersaulted down the hill sideways and slid another 10 feet or so. Luckily, the ground was soft, and I rolled into a good tuck until everything stopped spinning. The descent on the other side was precarious- the trail is steep and covered in a lot of loose dirt and rocks. Even though I was being more careful than usual, I still managed to fall and split my shin on a rock. The two spills were enough to shake my confidence a bit the rest of the way down.

After a few miles of bike path, the course turned back up the Peaks Trail. After the initial climb, that’s one of my favorite sections of singletrack- a lot of rooty,Ã‚ punchy climbs that suit an aggressive riding style. I was thoroughly enjoying myself when the singletrack gave way to the pavement on Ski Hill Road to head back into Breck/Carter Park.

I made a quick pit stop before starting loop 2, though it wasn’t quite quick enough. As I was heading up the crazy switchback hill out onto the course, the 68/32 mile races started their neutral rollout. They got to skip the first loop that the 100 mile riders rode and began their races on our loop #2. This meant that as I was trying to pace myself on the initial climb, I was forced to either speed up or stop and get out of the way for charging 68/32 mile racers. That sucked. A lot. I lost several minutes waiting for conga lines of those guys storming up the trail.

I eventually dove back in when the guys wearing white cotton gym socks started showing up.

Once that nonsense cleared out, the course followed part of the Firecracker 50 course to the French Gulch climb. This is the same one that I’d suffered through 2x in the Firecracker course. I’d fully support operations to strip mine that mountain into oblivion. 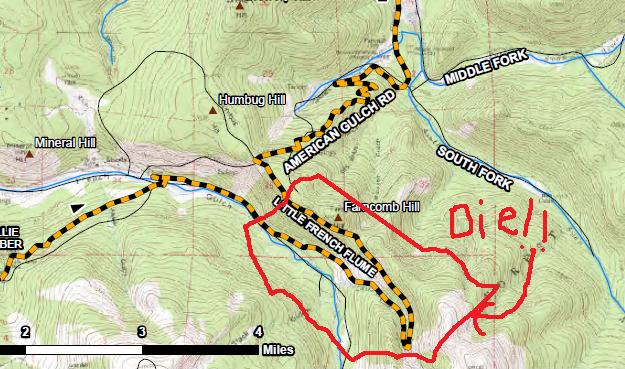 After getting through that part, it was mostly downhill for a while to an aid station where one of the workers thought it’d be cool to tell people that the next aid station was only 3 miles away with a little climb. He acted dead serious in saying it,Ã‚ but I was suspicious, so I filled both of my bottles. Other people weren’t, though, and tried to cover the following rather difficult portion of the course with only 1 bottle. To make matters worse, the next aid station (which was much further aweay than 3 miles) was out of plain water. Luckily, the trail snaked along the outer part of a golf course, and many of us refilled at their water fountain.

Somewhere along there, I rode with a woman who said she was in the 100 mile SS race, but I never saw her on the results sheet (even as a DNF), so I don’t know what happened to her.

During that loop, I started getting some really bad pain in my right big toe. It felt like an old running injury from a couple of years ago, so I was hoping that I could avoid getting off of my bike for anything because every time I walked, it felt like my toenail was trying to explode off of my toe. That was prettymuch the only time I was hating life during the race, and luckily, the final loop was reletively mild.

Loop 3 was, by far, my favorite. During my preride the week before, I’d taken a wrong turn and gone up a horrible, rutted, steep dirtbike trail from Indiana Creek to Boreas Pass. So, I was plesantly surprised to see that the course was routed on a much more rideable jeep trail. I made the time cutoff over Boreas by 40 minutes (plenty of time, but I’d like to not even have to think about it in the future). The descent from Boreas onto singletrack to Como was AWESOME! It went from a slight, flowy downgrade to rock gardens that were really fun to pick through. Once I made the turnaround at the Como aid station, I headed back up what seemed like an endless hill back through Boreas Pass.

The nice thing about that loop is that it ends with 10 miles of almost all downhill riding. It gives you time to relish in the fact that, barring a catastrophic accident, you’re going to finish a really, really tough race. I crossed the line in 12 hours, 53 minutes. Apparently, I was the only SS woman that finished, and my time was good enough for 5th place overall in the women’s race (all age groups- geared/SS).

After a podium photo and some food, I headed back to the hostel to get cleaned up and get out to celebrate. I ended up at a nearby bar (aptly named the “Dive” bar). The night almost got off to a bad start when the “way too drunk” guy started hitting on me and getting waaaay in to my personal space. I told him to leave me alone and tried to ignore him, but he was persistent. I told him that I was going to beat him if he didn’t leave me alone. Apparently, the bartender overheard and had one of the emplyees escort him out before things could get out of hand.

At the bar, I met a really cool British couple who was in Breck for a vacation. I also met an aspiring country music artist and all of his friends, who, after a few rounds of drinks, sang along with “She Thinks my Tractor’s Sexy” when someone played it on the jukebox. Really great way to end one of the hardest race days I’ve ever had and the best road trip I’ve ever been on.