Right now, I’m sitting in the Bale Honda service area waiting room in Little Rock, Arkansas. You may ask, Andrea, WTF are you doing there? Well, I’ll start with the good news first.

I left early on Saturday morning to head out for a weekend of racing followed by a day or two of training at some other places around Arkansas.

First, the Arkansas State Crit in Little Rock. The course was pretty awesome- kinda technical with chicanes, a little hill, and some bad pavement. Only three other women showed up, and on about the 4th lap, they called a cash prime. I went for it, got it, and looked back to see that I’d gapped the little group, so I kept at it. I ended up staying away for a solo win.Ã‚ Woohoo!

After that, I met up with Kurt (from that adventure race a while back) and followed him up to Eureka Springs for the Fat Tire Festival race in the morning. We pre-rode part of the course. During that time, I clipped a tree with my right shoulder and managed to fall hard enough to get a 3rd butt-cheek of swelling on the back/side of my left leg. The course was pretty tough in places- plenty of climbing punctuated by technical gravelly sections. I was feeling pretty tired by the end of our ride and nearly bonked, but made it back alive with the help of a Powerbar.

Sunday morning- race time. The race started in the middle of downtown Eureka Springs. It was a pretty unique- it went uphill on pavement, then took to the random back alleys and singletrack that led out to Lake Leatherwood, where it lapped the lake before the finish. I raced the Cat II race (not enough points/skill yet to go to Cat I/Expert) against about 8 other women.
The start was a little hectic- we started with some men as well, so I couldn’t tell if anyone was ahead of or behind me for most of the race. My strategy was to just ride at a hard but sustainable pace and hope for the best. Turns out, that was good enough for a win… at least in the 19-39 category. There was an older woman who beat me by about a minute. I’d caught up to her, but she schooled me on the technical rocky sections in between the catch and the finish. I gotta practice those…

So after the awards, I hit the road. I decided to not go to Devil’s Den (my original plan) and just head to Lake Sylvia instead. I rolled in & set up camp around 8:15 last night and was asleep by 9:30. I woke up with the sun this morning, and decided to drop some water about 18 miles out from camp at an intersection of forest roads where I knew I’d pass by a couple of times. I didn’t want to leave my bike at the campsite alone, so I tossed it up on the roof rack (a decision that would turn out to be invaluable later on).
The ride out was fine… I had the GPS running, but didn’t really pay attention to it since it always tried to route me onto goat-trail type roads. However, when I was on the way back, I wasn’t paying attention. The GPS woman told me to turn right at an intersection, and I should have turned left. About a mile down, I realized my error and started looking for a turnaround. Not paying attention to the road immediately in front of me, I hit a dry creek bed and bottomed out. I’ll let the photos explain the rest of it (in case you can’t make it out, in the first photo, the silver spot on the rock is metal from my oil pan, and the brown, shiny stuff is oil)… 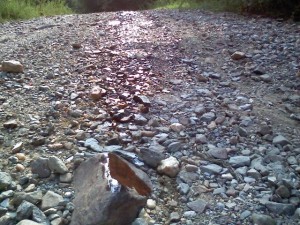 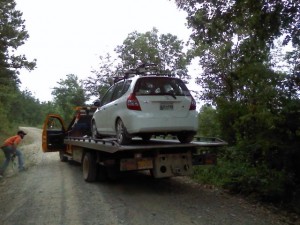 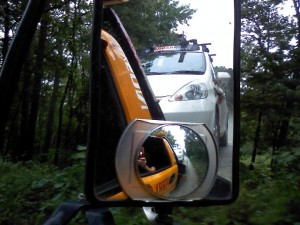