I was totally planning to ride Loop 2 on Saturday morning, but managed to oversleep and miss the group that was leaving at 7:00am from Carter Park. My fault- I’d stayed up too late the night before at a place simply called the Irish Pub. While I’d been eating dinner, I’d seen a lot of younger people heading in, so I figured I’d go have a beer and check it out. The locals in Breck are very friendly… I ended up hanging out on the porch next to a fire pit for a couple more hours just talking to random people.

So, Saturday, I woke up and went to breakfast at the Columbine (other favorite spot besides the Blue Moose), packed the car, stopped by the Laundromat, then headed out to Winter Park.

Winter Park is a ski resort that’s opened its lifts and runs up to downhill riders in the summer. I’d never been to a downhill course before, and had almost no idea what to expect. I eventually found my way to the race headquarters. They suggested pre-riding the course, but I’d need to buy a lift ticket to get to the top.

Um, no thanks… Isn’t there a way to ride up there?!? Sure. Take the access road.

So, I went back to the car and changed. After waiting for an afternoon rain shower to pass, I made my way up the “hill” (and by “hill,” I mean 1700 foot climb). I waved at the groups of DH guys along the way. I realized that climbing is seeming easy on a geared bike. Once at the top, I found the course markings and started making my way down. I took it pretty easy- the course was generally pretty mild singletrack with bermed turns, random small jumps, and occasional roots and rocks. There was only one uphill pitch, and it was positioned where you could carry a lot of speed into it. Pretty straightforward.

I figured since I’d get a lift ticket with my race entry, and the lifts would open to racers at 8:30 the next day that I’d just save my legs and preride once more in the morning. I changed and headed to the Rocky Mountain Inn and Hostel in nearby Fraser (which, other than the absence of The Tour on TV, was probably the nicest hostel I’ve been to).

Sunday morning, I got up and continued what has become a fun side project of my trip- breakfast at local spots. This time, it was a cheese omelet at Sharky’s in Fraser. Delicious.

I got to the race check-in, picked up my number and lift ticket, and got ready to go. Once I was back at the lift, I realized I’d never used a lift before and had no idea what I was doing. Luckily, the guys in line with me were nice enough to explain how to get my bike on to a moving bike rack before it turned and headed back up the hill. My second run was good- I noticed a few more subtle things about the course and smoothed out my turns a bit more (having never been on a DH course, I’d never really taken bermed turns at high speeds, so it was a learning experience).

I rode back up, hoping for one more practice run, but by that time, the Pro categories were close to starting, so I hung around, warmed up, and chatted with the other women who were lining up with me. Turns out, 11 expert women had signed up (2 others in my age group). The start was going to be crucial, because once you’re on the trail, passing is hard to do. They were mostly local, and very familiar with the course. I told them I was from Memphis, and I liked going fast.

We placed our bikes for the LeMans start. Some of the girls were complaining about it, but thanks to last year’s Cyclocrunk races, I’ve got them pretty nailed down. When we started, I managed to be the 3rd of the group to enter the trail (the initial gravel lead-in was about 250 yards up about a 10% grade). The woman on the front immediately took off down the hill. To my dismay, the two in front of me did not follow. 2nd place was all over her brakes and 3rd was afraid to make an agressive pass. 1st was still bombing down the hill and putting massive amounts of time on us. Eventually 3rd and I took a low line around a turn and got around the “all over the brakes” girl. I was millimeters from rubbing her rear tire on several occasions, but she wasn’t going to let me pass easily. I finally edged by her on a wider part of the trail. In the process, I gave her a pretty good bump.

She yelled at me. I wasn’t there to make friends.

By this time, we were deep into the course, and the leader was well out of sight. I let go of the brakes and let it fly. I soon caught sight of her. Every turn, she was a little closer. Unfortunately, though, her initial lead was too great for me to cover, and I rolled across the finish 12 seconds behind her. She was just turning to look back up at the hill when I rolled up and was startled that I was as close as I was (I would be really interested to know how large her lead was before I got around the other riders). 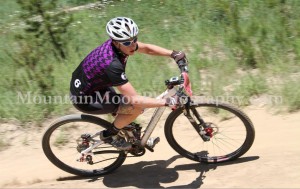 I was a little disappointed, but pretty excited nonetheless. The awesomeness of the day was just beginning, though. I wanted to get in a few more runs before my lift ticket expired, so I got back in line. Lucky for me, I was one chair behind Dejay Birtch and a couple of his friends (Rob and Andy). They paused for a few minutes to look at the map on top of the hill. I took the chance to go say hi. I ended up tagging along with them for a couple more runs before we went back to the base area for the podium presentations… 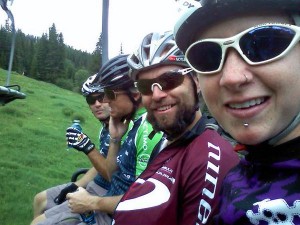 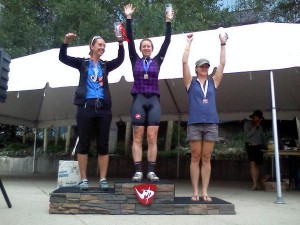 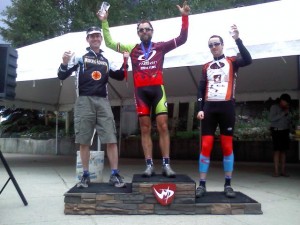 By then, the lift ticket was expired, and I was ready to get back to the hostel, clean up, and head to Leadville. Days like that are what I’m here for.