I was almost ready to head out the door yesterday when I realized that I didn’t have my Garmin (705). I went back to my room and looked in the usual spots- computer bag, race bag, etc.

I spent an hour tearing apart and re-packing everything I had in the room and still couldn’t find it. I had a sinking feeling that one of the hikers that had been staying at the hostel might have “accidentally” picked it up. After exhausting all searches, I figured I was going to have to buy another one, and ended up driving an hour and a half to the REI in a western suburb of Denver to get a Garmin 500.

By the time I got back, it was after 3:00, and I didn’t want to chance doing the entire loop (the directions/map aren’t always clear, so it can take a good chunk of time to navigate), so I decided to ride the closer part of the loop and up to the Continental Divide.

Then I went to put my shoes on and found that my 705 had not been stolen, but had been safe and sound in my left Mavic since the day before. Crap.

I headed out on my ride. The initial part was hard, but not impossible. I didn’t start walking until the Indiana Creek jeep trail. It was steep and gnarly. Most of the time, the grade on my Garmin didn’t drop below 25%, and I saw as high as 39% more than once. The elevation was 10K and increasing as well. I felt as if I was going to black out a few times. That section is going to be a death march next week.

After that part, the remainder of the climb up Boreas Pass was gentle and scenic. Unlike the day before, there was no snow storm… 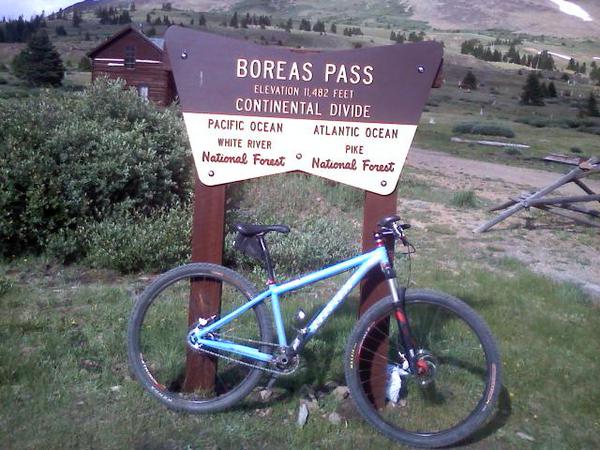 I turned around and descended back down the course in to Breck. That part is going to be fuuuuun.