I’d like to say that the time change on Saturday night was a relief since it allowed me to sleep an extra hour before the 5am alarm I’d set so that I could make the 2 hour drive to Cullman, AL to race at 9am. However, I instead had time change-related nightmares all night and kept waking up thinking that I was doing something wrong.

Despite that, I was up in enough time to stop for gas and a large coffee and still make it to the park before registration was officially open.

I registered for both the Women’s A Race and the Singlespeed Race. Once the bikes were ready and the numbers were pinned, I went out for a couple of preride laps. After riding around on both my A bike (Cannondale SuperX) and B bike (Scott Addict CX), I decided I’d go with the B bike for the race. The course had a metric crap-ton of 180 degree turns, and the B bike has alloy rims, and the braking power is more predictable than on the carbon rims. I also like the slow-speed handling of the B-bike a little better. Even though it’s about 2 pounds heavier (between frame and wheels), the combination of brakes and handling felt faster for that particular course.

The women’s race started just behind the two groups of Master’s Men. I’ve always hated that, because it means that I’ll be passing the tail of the master’s group within the first half of the course. Usually, they’re very courteous, and, realizing that they’re not in contention for a podium spot in their own race, will give a little space for the women’s race to come through. That wasn’t the case on Sunday, though. I caught the last place guy during a series of about 10 turns up/down/back/forth on a hill early in the course. The other women were only  a turn or two back from me, and, even though I told him repeatedly that I needed to get by because of our race, he wouldn’t budge. So, I took an opportunity to pass when he swung extra wide/slow going into a 180. I dove inside, and, as I passed him, he accelerated and ran into me shoulder to shoulder (more like ribs to shoulder… he was a big man). He ran into the course tape, also, and yelled, “next time you do that, I’m going to knock you over.” I said something back to him along the lines of, “I’m leading my race, and you’re in LAST PLACE.” Then, I dropped him and didn’t look back. 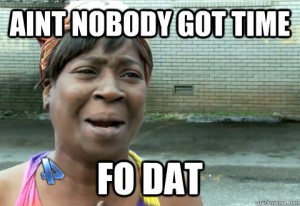 (After my race was over, I told the guys in change at the finish line about the incident, and let them know that if he put a finger on me, I was calling the police)

I went as fast as I could without totally draining my tank for the singlespeed race immediately after the first one. All the while, spectators were yelling at the men to not let me catch them. Sure, they make a nice carrot to motivate you to keep pace, but honestly, I’m not out there to catch guys who I’m not technically racing. I’m out there to win the women’s race, and I was happy to be successful in that. 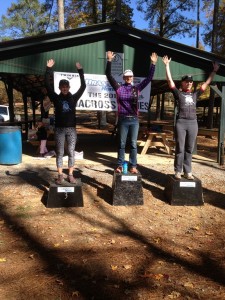 The singlespeed race lined up soon after the women’s race. It was the first time in a long time that I raced the newly-rebuilt CrossCheck. First lap impression? Id forgotten how much toe overlap that thing has. When we were given the signal to go, I could tell in the first few turns that I was going to get out-handled big time if I didn’t pull my head outta my backside and stay off the brakes a little more. Dealing with toe overlap is a combination of ratchet-pedaling, timing, and ignoring the noise your foot makes on your tire in less severe instances.

From the gun, two guys took off ahead of me. I let them go, and entered the techy 10-turn section with them a few seconds up, and a group of guys on my wheel. Somewhere on that lap, I think a couple passed me, but I ended up reeling them back in on the second lap. With two to go (we raced 4 laps), one of the guys who’d taken off initially looked like he imploded and was going backwards. I made the move to catch him, and was probably within about 15 seconds or so, but he composed himself and pulled away on the last lap.

Side note- unfortunately, during the SS race, I heard people using the “C” word*. STOP USING THAT WORD. IT’S DEMEANING AND DISRESPECTFUL TO WOMEN WHO WORK REALLY HARD TO BE REALLY FAST.

So, I stuck a solid 3rd place singlespeed. Looking back at the lap times, I went anywhere from 30 seconds to 1 minute faster per lap during that race. It boiled down to a combination of less braking, harder hammering, and being “in” the field of competitors rather than ahead of it.

The riding over the weekend has me re-visiting my thoughts on brakes. For wide-open, fast courses (like CrossVegas or the Outdoors, Inc. race this upcoming Sunday, a good set of cantilever brakes (like the Shorty Ultimates) on carbon rims feels totally fine. However, I definitely felt faster on the narrow/tech sections when using those same brakes on alloy rims. I’m not one to avoid changing my point of view on bike technology, and, I can now see the draw to using disc brakes with carbon rims as opposed to cantilevers. I am going to try a set of TRP CX 8.4 V-Brakes. They’ll be in today, and I’ve got an interval workout tomorrow, so I’ll report back soon.

The next few days should bring a little excitement- tomorrow after I interval and go to a Structural Integration session, I’m going to pack up and drive to Mountain View. Friday morning, I’ll be meeting up with some of the other Syllamo advocates as well as with an IMBA rep and a USFS rep. We’re going to talk about what can be done to A)keep the trail more clear of overgrowth and deadfall, and B)Stop the logging of the trail area (logging both damages the tread AND takes away the shade that prevents summer overgrowth). I’m sure I’ll get in a couple of nice rides on Friday afternoon and Saturday morning as well.