Last I posted (at least, the last serious post), I mentioned that I thought I was suffering from a little burnout. Turns out, I was right. It only took a cold, windy, mud slog of a cyclocross race to make me admit it.

Ryan and I planned to race both the cyclocross race on Saturday afternoon, then the cross country race Sunday morning. The weather looked like it was going to be terrible- wet and cold on Saturday, then frigid overnight, with temps dropping into the mid twenties. However, the forecast was the same for Memphis, and, with my being somewhat bored with training, I figured that racing in bad weather beat the hell out of staying home and training in it.

Saturday morning,  Poolboy Matt and Ryan crammed 7 bikes into and onto the Element (4 CX bikes and 3 MTBs… I didn’t know if I’d want to race SS or FS), then piled luggage into the remaining room in the back, and we headed off to Hot Springs. It was intermittently misty with temps in the low 40s, and I fought Element-tossing gusts of cross wind for most of the trip across Arkansas.

We were at Cearglades Park pretty early, so I ate a sandwich and hid inside the car until it was time to get moving. Ryan went out and checked the course, which was a wide, vast expanse of lots of heavy-grass power sections punctuated with technical, off-camber turns- it had all the elements of a great CX course, including one set of fast barriers, a steep, off-camber, slightly intimidating downhill, as well as a steep, slightly loose run-up with a log at the top. With all the rain the past 24 hours, it was also totally saturated. I’d normally thrive in that sort of thing, so I wasn’t too worried about it. I kitted up and went out to pre-ride, and, like Ryan had reported, it was tough. The ground was like pudding under a mat of grass. Luckily, I was in the first race of the day, so we had the benefit of being on course before the grass was totally churned into the underlying mud.

I didn’t warm up very well, so when the race started, I didn’t exactly go for the holeshot. Only one other woman was racing (Heather Ladd) and she wasn’t gunning for it, either. I ramped up to my usual hammer pace within the first couple of minutes and started working my way away from her and through the field of cat 4 and Master’s guys as they bogged down and blew up in the mud. In the first couple of laps, I was as far up as 2nd place overall with first in sight, but I was not enjoying any of it. I wanted to stop the entire time, and, literally, the only thing that kept me from DNFing was the thought of a decent payout check at the end.

Photos stolen directly from the Arkansas Outside folks: 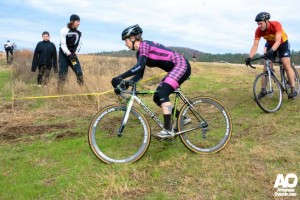 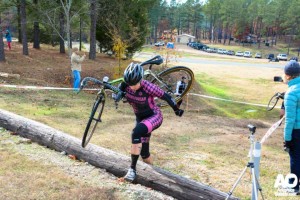 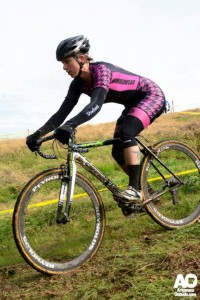 Side note- as tiny as the women’s fields are in Arkansas, their CX series as a whole has done a great job of making the races equal payout for top 3 women’s places. I really appreciate them sticking with it, and, though it’s slow going, it’s a great, respectful step towards encouraging more women to race cyclocross.

I was having a bad time. On cold, wet, muddy, hard courses, it’s impossible to fake it. Time to bail on the remainder of the 2013 season so I’ll be ready to train my ass off for 2014. I know it’s time because I’m totally OK with NOT competing in the state championship CX race in order to take said break.

After I changed and unthawed my toes, I swapped the Limus/Reynolds wheels onto Ryan’s bike and found some hot chocolate to mix my whiskey into before going to the pit to watch/heckle Ryan during the open race. 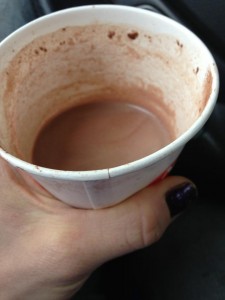 With our cross-country plans dashed by my implosion, we met some Memphis friends at a Hot Springs local brewery for dinner and drinks. Hot Springs is weird and beautiful, in a brewery-in-a-bathhouse sort of way. 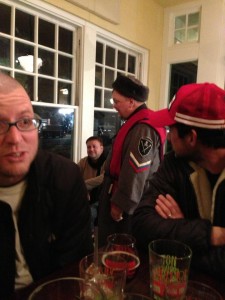 What’s next? Lots of doing activities that aren’t cycling for a hot minute. What am I doing? That’ll be my next blog entry. I guarantee it’ll be more interesting than the XC Skiing photos that all the Colorado pros are posting right now.

One thought on “Cedarglades CX and beyond”