Because the Spa City 6 hour fell right into the end of my “take it easy in order to avoid secondary injury” time following my cortisone injection, I did not race over the weekend. However, as, as I mentioned in on of the previous posts, I owed Matt some crew work, so I went with him to do whatever I could to give him a hand.

It started Friday morning, after another round of anesthetic injections into my hamstring (the first round was cortisone in the ischial bursa and anesthetic in the hamstring). It sucked, but not nearly as badly as the first time. 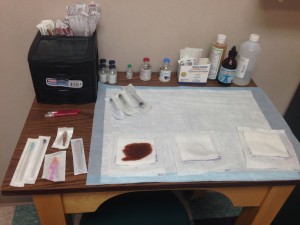 Once I was finished at the doctor’s office, I ran home, ate breakfast, and started in on weekend preparations. It’s been my goal so far this season to make short road trips without having to eat out at all, so I made some chicken/veggie rice for dinner and bacon/egg rice bars for breakfast. I also made a cookie cake… more on that in a minute. It’s a little bit of an arduous process to make/pack all the food, but it pays off hugely in predictable digestive processes and time saved trying to look for a restaurant with decent food.

Once I was done cooking, I packed most things into the car and waited for Matt to get home from a half day of work. We loaded up quickly and headed out to Hot Springs. Once we were there, we got my “monument to car camping” tent pitched and I finished uploading/setup while he went out for a little preride. All the timing worked out just right to warm up dinner just as the sun was setting… 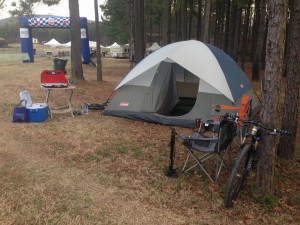 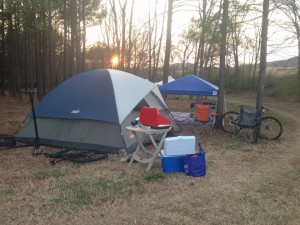 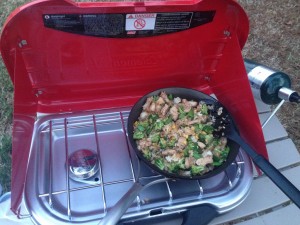 Saturday morning, the arrival of people setting up pits at 6am woke us up before the alarm clocks. Since we’d camped in our usual prime pit spot, it was a matter of rolling out of bed and lighting the camp stove to heat up water for coffee. Everything went smoothly, though I quickly figured out that I was a bigger bundle of nerves as a crew person than I’ve ever been for a bike race. I did my best to hide it and went to the LeMans start area to make sure that Matt’s garmin didn’t shut off while he was staging for the start, and, once it didn’t and they were on course, I trekked down to the staging area to get Matt’s jacket and leg warmers he’d tossed beforehand.

I spent the next hour or so pacing around and being a bundle of nervous energy (ok, possibly the next 6 hours). When Matt finally arrived at the end of lap 1, he told me he’d wrecked into a tree and that we should pack up and go home. I had some stern words and ibuprofen for him and he headed back out. Nervous energy x1000.

Somewhere in my pacing and fidgeting, I remembered the cookie cake. Last year at post-race Slobberknocker, local racer Scott Penrod was telling me about how he felt better climbing when he weighed less, and that he wanted to lose weight prior to Leadville because he really wanted the sub-9hr buckle. I then gave him a pretty hard time about the handful of cookies he’d grabbed off the finish line snack table, and he ended up looking really sad then putting them back in favor of a banana. I felt a little bad, so I promised him that if he brought back the buckle, I’d make him a cookie cake.

He finished a handful of seconds under 9 hours- attributing at least a couple of those seconds to leaving the cookies on the table earlier in the year.

So, I left this on his crew table after the first lap: 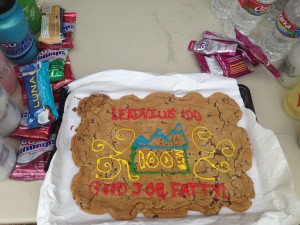 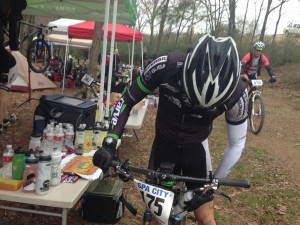 He waited ’til after the race to consume it, because, according to him, “I’ll puke if I eat it now!”

Back in my pit area, Matt was doing progressively better with each lap. the gap between him and the handful of racers I was marking to know that he’d be in soon was growing smaller with each pass. Somewhere on lap 5 of his eventual 6, he passed most of them… with a couple wondering where the hell he’d come from because he’d gone by them like a scalded cat. When he crossed the finish line, ahead of even more people than he’d been after his 5th, I was so giddy I almost hugged him off his bike. I’ve never been so relieved to see the end of a race. 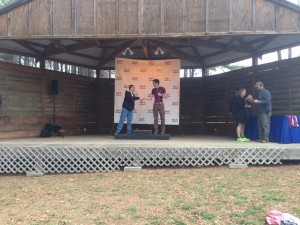 After his podium, we packed up and got on the road just as the rain was starting.

It makes me very proud- I’ve been doing my best to teach him how to be a good bike racer, and Saturday, I got to watch it happen. It’s quite a rewarding feeling. Next up? Warrior Creek 6 hour. I’m back on track with training to be back in form just in time for it.