Recovery is going pretty OK with my injected leg. The cortisone-affected area feels prettymuch normal, and the part of my hamstring that received what looks like 4 or 5 sticks (it’s hard to crane my head around and count in a mirror) is just looking/feeling bruised now. I was able to get out for a good ride and met up with some friends along the way. About 3/4s of the way through, this happened:

Those guys had no clue how to get their car unstuck… guess they don’t teach the art of rockin’ it in the academy! Along those lines, you’ll notice at the very end of the video the lack of a “thank you” from captain grouch in the driver’s seat… he was telling us to get our bikes out of the way because he wanted to drive the car on the high spot where we were parked. Apparently, he was trying to show his partner a “short cut” under the nearby bridge over the trailhead.

I’m very thankful that recovery has been easy enough that I can stay pretty active. I’m incredibly determined this year to keep my race weight a solid 140 pounds and under. I’ve been hanging out in the 142-144 area. It doesn’t sound like much, but when you’re already eating a very clean, filling diet that’s maintaining your weight, it’s basically an act of sheer willpower and hunger to lose anything. I did, however, decide that I’d reward myself once I arrived at said weight… not with some stupid pile of junk food or something like that. I designed a pair of NikeID shoes instead… 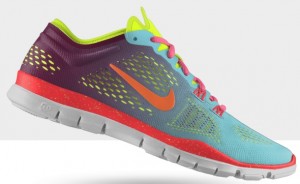 I ordered them already, but I’ve imposed a 140 pound weight limit on them.

My #1 advice for losing anyone looking to lose weight? Control your appetite.
First off, low fat diets are totally bogus. The archaic recommendation to not eat fat is based off of old school misinformation and not off of any real science or human research. Fat and fiber make you feel full. Go ahead and eat bacon (the nitrate-free type), red meat, whatever… just watch portion size. While the fat in your food isn’t actually clogging your arteries, it is high in calories, so when you see that a serving of steak is 4oz, you’re in for a nasty wake-up call when you put that juicy ribeye on a scale. So, go for the full-fat versions of everything. While you’re at it, QUIT TAKING THE #@$*ING YOLKS OUT OF YOUR EGGS.
You’re going to get a lot more success by eliminating any sources of refined sugar (other than what you eat just before/during/after training). Eating something that’s mostly carbohydrates and little fiber/fat/protein is going to make your blood sugar rise quickly then fall below normal (I’m not going to take the time here to give you all of the physiology, but that’s the bare basics of it). Turns out, low blood sugar is a stimulus for hunger. Bonus tip: consumption of the artifical sweeteners in diet drinks will also result in low blood sugar and thus, hunger.

I’ve basically lived by that advice to successfully manage/maintain my weight (except after a long ride or bike race- I cut loose a little more then). I’ve also reduced alcohol consumption to 1 or 2 nights a week (because, let’s face it- Just Riding Along wouldn’t be the same if we were stone cold sober).

So, now that I eat mostly “good” food, I’m basically stuck with reducing the amount of food I eat. There’s no way around it, trick, or secret… I’m just hungry. It’s will power. It makes me angry at chocolate bars when I see them. However, I think of things like riding up hills, my love of looking muscle-y, custom Nike shoes, and find something distracting to do. It’s been working slow and steady, but I’m looking forward to adding in some extra training to keep things rolling in the downward direction.

Posted in Trail Riding, Training
Hi, I'm Andrea! This blog is a journal of the highs, lows, and challenges in my constant search for adventure