The state championship cross country race happened over the weekend at Montgomery Bell State Park. Matt and I drove up Saturday afternoon, pre-rode, and stayed the night in Dickson. Combined with a trip for a couple of pre-ride laps a few weeks ago, I was feeling good about the course. It’s a lot of up & down with a mix of both sweeping and tight turns and a bunch of roots and a couple of longer climb-y spots. It’s a very nice mix of course terrain for a state championship race.

After our pre-ride, we hit the registration tent, where I learned that there currently weren’t any other Cat 1 women registered. I crossed my fingers that there’d be some day-of ladies showing up from Nashville.

Fast forward to Sunday morning. It rained a bunch before the race. Luckily, the Montgomery Bell trail is also great for a championship race because it drains really well and holds up nicely to traffic in wet conditions. However, since 99% of the trails I ride don’t follow that rule, and therefore are off-limits in the rain to avoid trail damage, I don’t often get the opportunity to ride wet roots and occasional greasy corners (basically, 9 in 10 turns at Montgomery Bell will hook up almost as well as when it’s dry, but the 10th one will two-wheel drift you into the poison ivy).

Turns out, no more women showed up. I was pretty disappointed, and lined up to start with the 40+ cat 1 men. I hadn’t warmed up much, so I just tailed the back of their group when we were given the signal to go. Once we were in the woods, I kinda hung out there until my glasses were too mud splattered to see well. I stopped and crammed them in my jersey. I figured from there, as I warmed up, I could probably pick a couple of dudes off, but then my seatpack started to fall off. I stopped to fix that (it actually took two stops, because in my haste, I missed looping a saddle rail the first time). The guys were long gone by then.

I rode two sloppy laps all by myself, occasionally going hard, occasionally coaching myself through some higher-speed wet turn practice, and occasionally daydreaming about my upcoming trip to Colorado then snapping out of it and remembering that I needed to hurry up and get this isht over with. I kind of debated as to whether or not I should take home the prize money and jersey given my somewhat uninspired riding.

At the podium presentations, I’d learn via the race director that other Cat 1 women in Nashville had said they weren’t going to come because they didn’t want to race for 2nd.

So  much shit can happen during a mountain bike race… it’s so not  a sure thing, ever. 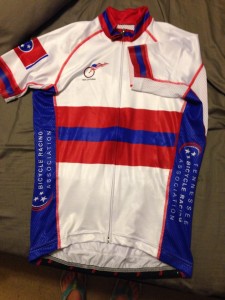 The state championship jerseys are pretty dope this year. I’m going to wear mine often as a testament to working so hard that no one else will show up.