Everyone’s got their own “bucket list,” including myself, though I’ve never gone so far as to write mine down. Seeing as I generally strive to live a bucket-list type life, it’s somewhat vague and often dynamic, though it has always included “smoke a joint with Willie Nelson” (I’ve yet to figure out how to get in touch with him). Also a recent addition, “spar with Glen Danzig” (following the posting of this link by @bigbikesthom on Twitter). It seems to somewhat revolve around musicians since music is always strongly in the backdrop of all of my greatest, worst, and most memorable life experiences.

Yesterday, I had the chance to check off a “thing” that wasn’t on my list because I didn’t know it was actually a “thing” until the night before- Go for a bike ride with a member of one of my favorite bands… a band that, along with other punk bands, once influenced how my teenage brain viewed the world around me.

Wednesday night, on twitter, I was tweeted to by Michael John Dimkich, asking if I could point him towards a good road ride when he and his band came through town. I didn’t think much of it and gave him my email address, then, while I was having coffee and reading email the next morning, realized who he was and that the band he was talking about was Bad Religion. I was a little speechless for a hot minute.

To go off on a small tangent…

Parents, you should encourage your children to listen to punk music. On the outside, you ask “WTF would I want my teen to get involved with something that’s usually associated with drinking, drugs, anarchy, rebelling against authority, and the like?” I think it’s the rebelling against authority part that’s important. It’s a whole culture of music that breeds independent thinkers. Lots of kids get in to mischief when they’re teens- regardless of the music they listen to. Would you rather have your kid’s mischief influenced by vapid, superficial pop music or by music that’s encouraging them to question what’s popular?

So, it goes without saying, the music of Bad Religion had a part in shaping the person I am today.

After exchanging a few emails and text messages, I drove to midtown to meet up with Mike for an easy ride. 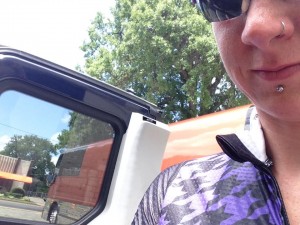 Ok, so I’ll warn you now… my photos aren’t that great. I didn’t want to be obnoxious with lots of picture-taking and whatnot. My only regret is not getting a picture of the Bad Religion sticker on Mike’s top tube.

We made a loop that took us through some “scenic” neighborhoods and on to Mud Island from the north end, taking it pretty easy. We stopped to cool off for a few minutes on the porch at Miss Cordelia’s at the south end of the island before heading through downtown and on to Riverside Drive to check out the new bike/pedestrian lanes that were installed on one side of the boulevard. We chatted mostly about bike stuff. He’s got a wealth of stories about ultramarathon running and riding with pros that come through California on a pretty regular basis.

Some of the other band members are following his lead with the bike thing, which I thought was really cool- 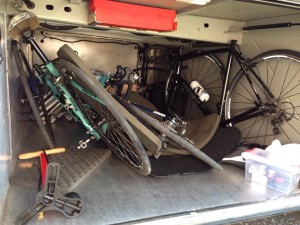 Post-ride Gatorade, air conditioning, and hanging out with Mike and Jay: 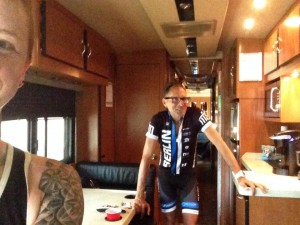 Lots of fun. I’m bummed that the tour didn’t include a Memphis show, but really stoked I got to ride with Mike and meet some of the other band & crew members. Mike did say that he’d love to meet other cyclists in cities where they stop. So, if you’re a fan, and you see your city on their tour schedule, then use the powers of social media to meet up! (Mike is @michaeljdimkich on Twitter)

2 thoughts on “Best Recovery Ride, Ever”