Alright, so I’m incredibly far behind on my blogging as of late, but I’ve basically had no free time since Friday morning last week. I don’t even remember what went on Friday morning, but at some point, I made some rice bars… mango/honey and bacon/egg… 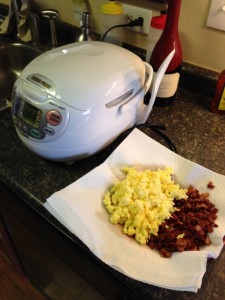 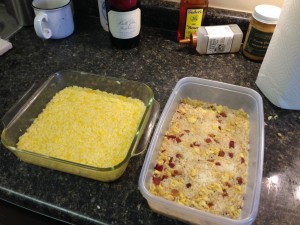 The purpose of this was to fulfill some of my duty as support crew for my friend John at the St. Jude 24 Hour Fundraising Ride. Though he’s done enough road racing to be a Cat 4 and a handful of Cat 2 cross county MTB races, he’d never actually competed in an endurance event, and his longest ride to date was somewhere in the neighborhood of 4 hours/70 miles. So, naturally, when that’s the case, it makes perfect sense for your first endurance event to be a 24 hour one in which you’ll eventually find yourself competing with older and much more experienced iron-assed dudes.

The ride started at 6pm on Friday, and I arrived somewhere close to 9pm. Casey (John’s wife) had been there since the start, and everything had been smooth sailing so far. 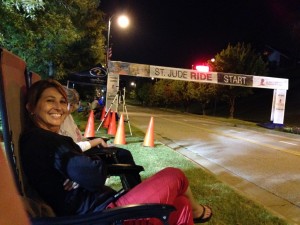 Aside from a slow leak flat tire, everything was smooth sailing for a good while. John was pretty relaxed and riding with Jim and Dale (the aforementioned iron-assed older guys). At some point before I arrived, he’d lapped them, so he was riding one lap up, which he hadn’t realized at first. However, when he came in at somewhere around 100 miles planning on taking a break, and Casey and I told him he was leading, his competitiveness kicked in and wouldn’t die for a very long time.

From then on out, it was the experience and saddle time of Dale and Jim versus the pain tolerance, competitiveness, and iron will of a former professional MMA fighter.

I did lots of bottle handups, electrolyte handups, food handups, and cheering. All night, John’s lead held at anywhere between half to a full lap. I did manage to take one 10-minute nap by using the countdown timer on my phone to wake me up at approximately 1 minute before John would be back through the pit area. 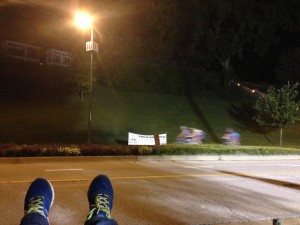 I fed John large quantities of caffeine and told him that he’d feel better when the sun came up. He kept at it, riding with Jim and Dale for much of the night. 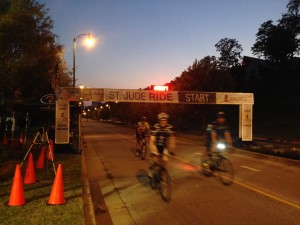 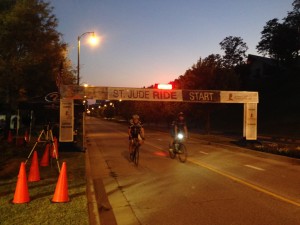 At one point, his bathroom break let them get within half a lap. Because of the boulevard-lap nature of the course, they could see the pain in his face and pedaling, and Jim was smelling blood. However, it seemed as though (and I could be totally wrong) Jim’s pace of trying to catch John at a down moment resulted in the breaking of Dale.

Somewhere after 6am, John earned himself a chicken biscuit feed. 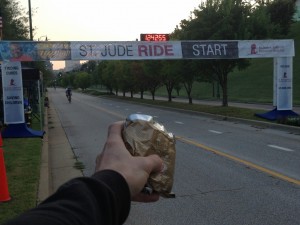 That was really the only time that I saw him start to lose his shit a little. He wanted Jim and Dale to take a break, but they hadn’t. Fortunately, as I mentioned earlier, Dale had to stop for one reason or another, and John put three laps into them during that time. He wanted to take a break, but I told him to keep those three laps in the bank for when it got really hot and he needed a cooldown break. He set back out, and, since I had to get a quick nap before heading to Arkansas to race enduro, I left around 8am.

Throughout the rest of the day, I was texting back and forth with Casey with advice about what to feed him, how much caffeine he should have, and the best way to keep him cooled off. At 113 laps (313 miles), he finally decided he’d had enough. Dale finished with 111 laps, and Jim with 119. He also raised a little over $3600- the highest individual fundraiser of all entrants (huge thanks to any of you who donated to the cause).

It was a pretty amazing feat to watch considering his lack of long-distance experience… as anyone who has ridden/raced long stuff can tell you, there’s a long learning curve of knowing how top take care of yourself and read the signals your body gives you to know what exactly it needs in those situations.

Shit, my laundry is done.
(posted from the Brevard Wash House)

Posted in Training
Hi, I'm Andrea! This blog is a journal of the highs, lows, and challenges in my constant search for adventure