Now, back to the weekend’s shenanigans.

Continuing my quest to maintain a healthy level of physical activity in the ongoing crap weather, I filled my weekend with various sorts of indoor activities. Riding was, again, an hour trainer ride with some intervals. That strategy seems to be doing a good job of maintaining my lactate threshold-related fitness level, and keeping to short and focused sessions makes them mentally bearable. Saturday afternoon, I went to an afternoon inversion workshop at Pike Yoga 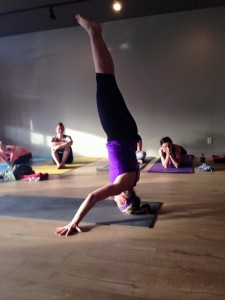 Though I haven’t practiced inversions in at least a year, the core strength I’ve gained from MMA/Jiu Jitsu made it much easier to balance upside down compared to the last time I was practicing inversions regularly.

Afterwards, I went home and made some dinner and watched the UFC 184 PPV- Rousey vs. Zingano. If you haven’t read about/heard/watched, I’d suggest a quick google search… The fight was 14 seconds long. I have to admit, in my bike racing “career” of going-on 9 years, on more than one occasion, I’ve felt the same way as Cat Zingano at the end of her fight… there’s a big difference between doing your best but still getting beaten and outright losing via your own mistake(s). That’s when experience is more of a motherf$#!^r than a teacher.

P.S. If you’re a fight fan, I’d suggest finding a replay of Friday night’s Invicta FC11 Strawweight bout between Alexa Grasso (6-0) vs. Mizuki Inoue (8-3). It’s one of my favorite fights I’ve watched since the upset/title fight between Dillashaw & Barao.

Sunday morning, I woke up early and carpooled over to LDMA in Sherwood, Arkansas for an awesome Jiu Jitsu training day. It was a ton of fun to train with some other women who were similar in size and ability to myself. Highlight of the day… being told by a guy that my guard was “ridiculous.” (in an “I can’t get out of this” sort of way) 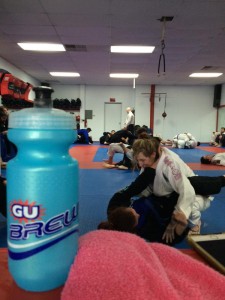 Quick lesson- if you have no idea what I’m talking about, look at these pictures. If you’re holding someone “in your guard,” you’re the person on your back, and the person between your legs is trying to get out, or “pass” your guard.

Between the yoga and the Jiu Jitsu, I felt wonderfully sore all over Monday morning. It’s been a long time since I felt that way, and I’ve missed the hell out of it. Today, I get to continue the cross-training with John and Matt. It’s been winter monsooning here, and the first local race of the season is scheduled for March 28th, so we’re going to go to the trail with shovels and drain any standing water so that it’s got a fighting chance of being dry enough for racing.

Up next? We’re under a winter storm warning tomorrow. Again.

One thought on “Indoor Training”