Last week, we had what’s hopefully the crux of our winter weather in the South. Overnight and well into the morning hours, we received a swath of sleet followed by 4-5 inches of snow. Indy was not amused when he got up for his 5am potty… 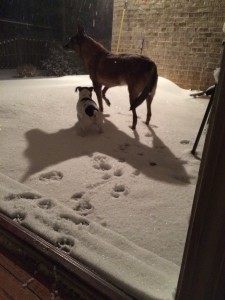 Though the windchill was somewhere near 20 degrees, Ryan, Matt, and I went out for a snow ride. It was somewhat precarious at times. Any place that cars had driven on the road, the snow had packed down into icy ruts. However, we were able to make it safely out to Shelby Farms. Any place where the ground surface was gravel or pavement was pretty easy to ride on. The slow-going parts were the dirt, which was still soft and muddy beneath the snow  in any low-lying areas because of warm monsoons the previous days. Flat pedals were a smart idea. 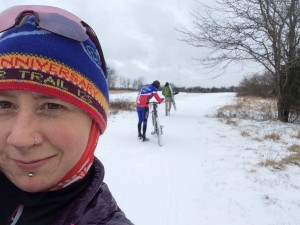 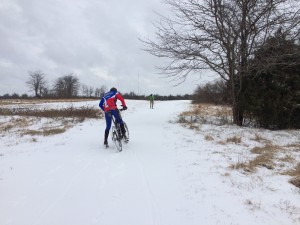 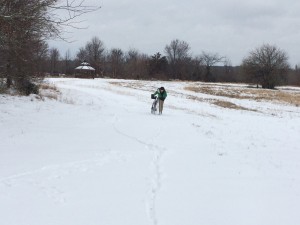 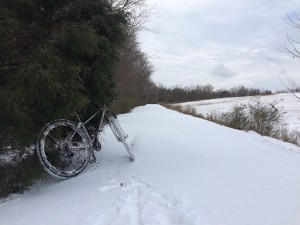 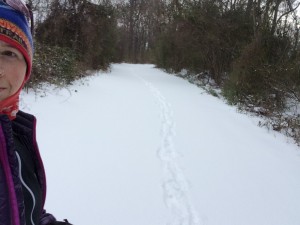 What would normally have taken about an hour to ride ended up taking a surprisingly strenuous 2.5 hours. The rest of the day was spent hiding under blankets and watching season 18 of The Ultimate Fighter. 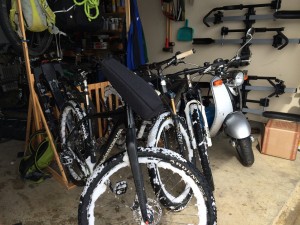 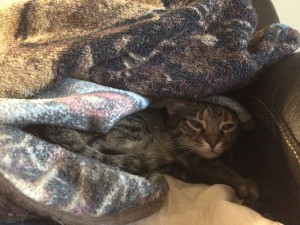 The next day was a gorgeous Colorado-esque scene of snow/bluebird skies. Ryan decided to go in to work (as opposed to working from home the previous day), so Matt and I, in lieu of being stir-crazy, went out for a snow walk (the road conditions were worse for riding, and the ground under the snow was still too soaked for a good off-road ride). At the park near the house, I practiced snow-jitsu and rolled a gigantic snowball until it became nearly too heavy to move. 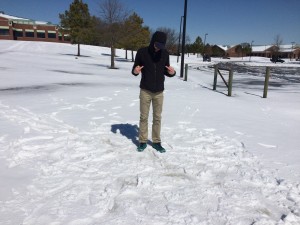 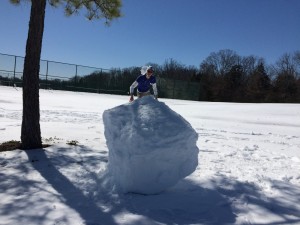 Total snow-rookie move? I got sunburned pretty bad on my face. At least I was wearing some good, dark glasses.

Now, it’s mild and damp. I don’t think I’ve seen the sun since I took these pictures. It’s just been ~50-60 degrees and raining most of the time. To put this winter’s terrible weather in perspective, the trails have been too wet to ride since Valentine’s Day, and there’s no dry end in sight. They’re totally saturated now, and it’s still intermittently rainy.

Matt, John, and I went to Herb Parson’s Lake last week before the snow and did some draining/repair on a couple of miles of trail, but the effort might be akin to using an icepick to break apart a glacier. 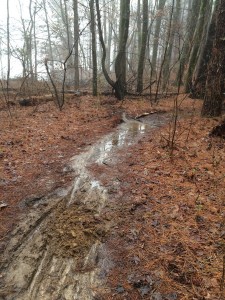 Ruts like the ones above were on the length of the entire trail (not just in the low spots… I’m talking the entire section of trail that we walked). At least a couple of people had said “eff it” and ridden despite the ground saturation. Our turnaround point was this culvert, which had become blocked with leaves, forcing the water over the top and washing away the surface dirt. 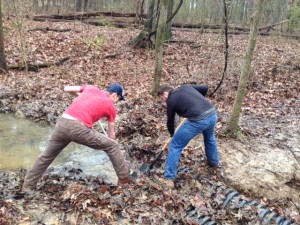 We unblocked the flow and dug a downstream hole to re-cover the pipes. 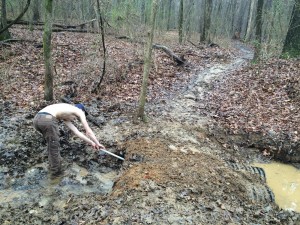 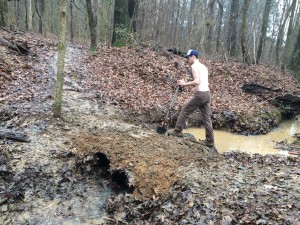 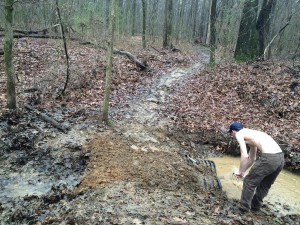 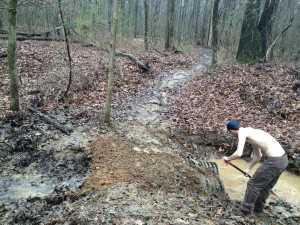 Hopefully the areas we repaired are OK. There were a couple of groups of riders who went to the trail on the snow day. Given the sogginess of what we briefly rode at Shelby Farms, it’s possible that the wet mud repairs we made were tracked through. It’s also possible that the ground was a little more frozen at the lake than what we found in town. Hoping for the latter.