If everyone on earth had to live in the mountains for a few months, they’d learn first hand that nature is something that you respect, because it’s way bigger and more powerful than any of us. It’s not just predators like mountain lions and bears, either. The mountains, in general, don’t play around. You have to know what’s out there and prepare for it, and you still may get caught off-guard on occasion.

The other day, I went out for a ride up Rollins Pass. It was my 3rd attempt at getting to the top, and, I’m happy to say, I made it up… 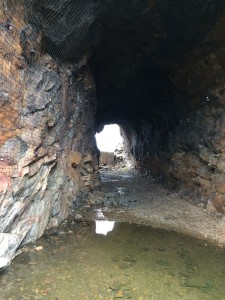 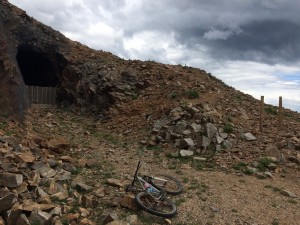 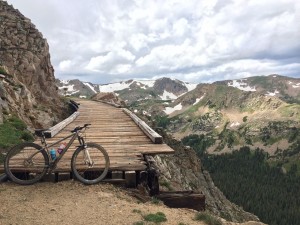 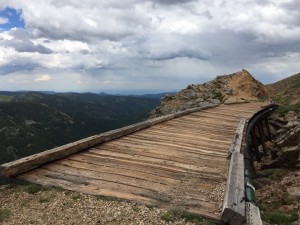 Something wasn’t right, though. I usually love being over treeline on top of mountains. It’s a very special place for me. Instead, I felt anxious. I wanted to get down… for no obvious reason that I could see (there was that one grey cloud that skirted by in the first photo, but it was otherwise nice), hear, or think up. I just didn’t want to be there, which is way out of the ordinary for me.

So, rather than explore around up there, I started back down the way I’d came. Just as I crossed back over the tunnel you see in the pics, a huge, black storm cloud appeared from around the mountain in front of me. On top of a mountain, lightning is both extremely dangerous and absolutely terrifying. It was at least two miles to get solidly back below treeline where there was less chance of getting struck. I saw some people hiking away from their truck with Missouri plates, and told them, very firmly, to get back in their truck until the bad weather passed. Then, I put my jacket on (you always carry a jacket up here because it’s possible to go from 70 and sunny to 45 and raining/sleeting/hailing in two minutes flat) and pedaled my ass off to get down the mountain.

Luckily, I was into the trees when the storm was overhead. Not totally safe, but way better than being exposed. It’s a good thing, too, because the thunder was deafening. There was hail… lots of hail. I didn’t want to stop because I didn’t want to get hypothermic (my pocket windbreaker is great, but it has its limits). It was incredibly painful, but at that point, I was just really glad that I wasn’t being struck by lightning. I didn’t get a picture then, but here are a couple of pics from a nearly identical storm I drove through the other day. The hail was so blinding and thick on the road that traffic stopped for a few minutes- 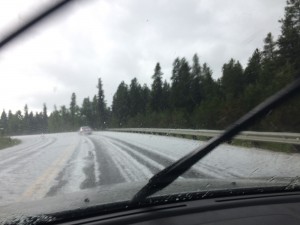 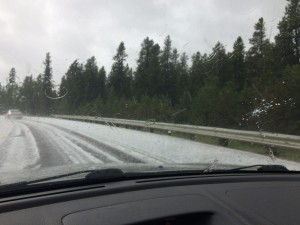 When I arrived back at my car (parked at the nearby Moffat Tunnel), My upper thighs and back were welted from the hail. That was scarier than a bear outside your RV at 4am.

Also on the list of “non-predatory things that could kill you” are moose. They don’t have natural predators in this part of the world, so they aren’t afraid of much, and occasionally get territorial towards humans. I was riding with a teammate the other day when we rounded a fast corner and startled this guy off the trail. He went right back to what he’d been doing, I snapped the photo, and we GTFO of there. 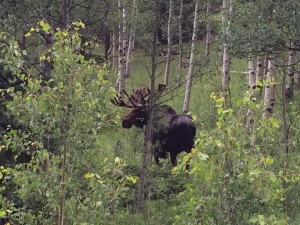 Yesterday, I went out for another adventurous ride into the backcountry. The same thing happened- I started a large moose as I descended into a small clearing. It moved so fast, I only saw the back end of it as it jumped into some thick foliage. It was as if someone was driving a brown minivan into the bushes. I kept going without trying to get a good look at it. I definitely heard it snort at me.

I respected nature and everything in it before I got here, but in the last few months, that sense has been elevated to another level. While the risks are still relatively low, it’s still humbling and awe-inspiring and so many other things all rolled in to such an amazing place. 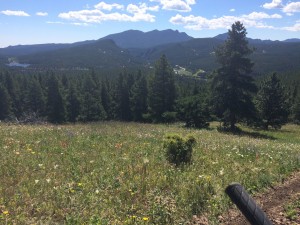