We’ve talked about it on the JRA Podcast, but, if you’re like me, and don’t listen to podcasts, then this is news to you…

A few weeks ago, I was racing the Golden Giddyup. It was a cool race- one of the only opportunities riders will ever have to ride some favorite Front Range trails as a closed course. The course featured both uphill and downhill timed stages, and you could bring whatever bike you wanted depending on where you wanted to focus your speed. Since it’s not terribly difficult to knock out an uphill time on a normal weekday without ruining other trail users’ fun, I decided to take full advantage of the closed course and bring out the Mach 6 for maximum shreddage on the downhill stages.

I wasn’t the only one who was thinking the same way. There are a handful of ladies around here that are incredibly fast downhill, and they were all lined up at the start. I was stoked that the Open Women’s category was the wave to go just behind the Open Men. This meant that we likely wouldn’t be dealing with a dude who wouldn’t let us pass on a stage, which had been one of my biggest fears, given dude’s track records for just looking over their shoulder and trying to go faster when anyone is behind them (especially a woman) and wants to get by.

Stage 1 was uphill on a section of the Chimney Gulch trail (you can look at the Strava page I’ll post a link to below if you need some help knowing where that is). I went kinda hard, but not really. The Mach 6 is a little on the heavy side (around 28 pounds), and it gets a little unwieldy on steep, technical stuff because the bottom bracket is low and the front wheel likes to be off the ground… you know, all the stuff that makes it great at going downhill. So, I ended up walking a rocky section and soon after, pulling over to let the woman behind me pass (somehow I still managed a 3rd fastest time out of the group up that one).

Stage 2 was down the Enchanted Forest and Apex Trails. I got to the start of the stage ahead of the other women and went as soon as I could. Enchanted Forest is cool because, unlike every other exposed, loose-over-hard front range trail, it’s tread is comparatively soft and grippy… and it’s through a forest, as the name suggests. It’s the perfect sort of place for the Mach 6 to shine. It’s got steep downhill droppy root sections that, if you have the nerve for it, you can let loose and straight line. I was doing just that (see Strava page for proof): https://www.strava.com/activities/717363117

I was feeling really good- somewhere on the edge of being out of control, but not quite. Suddenly, at the end of the Enchanted Forest before the course turned on to the Apex trail, I was hauling the mail down the last major root section, when I heard a bad POWCRACK noise and almost instantaneously lost control of my bike. I managed to lay it down somehwat gently, considering the speed at which I was traveling. I quickly gathered myself off the track to try and continue, but when I picked up my bike, realized that my top shock eyelet had failed… catastrophically. As in, it went from being an O to being a C. 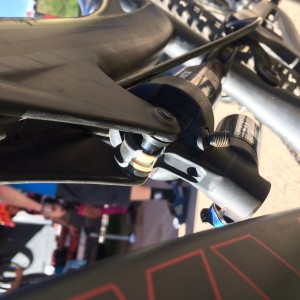 I walked my broken machine down the Apex trail to the neutral support at the bottom, where everyone gawked and said they’d never seen that happen before. I continued being sad and had a shot of Wild Turkey 101 and a slice of bacon. 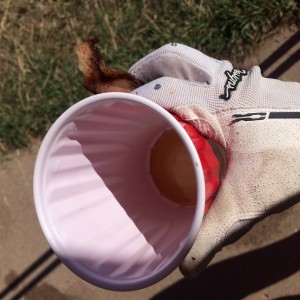 The following Monday, I called up Pivot and explained what happened. It wasn’t their part that had failed, but, in the process of the Fox part failing, the linkage had broken the seat tube on the Mach 6. 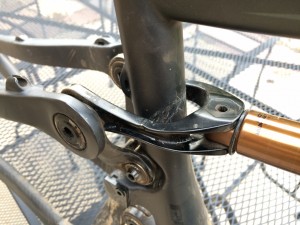 Even though it wasn’t technically “their fault,” they agreed to warranty the frame, though in order for them to get a warranty shock from Fox, I ended up having to prove to Fox that I hadn’t driven my bike into the roof of a garage whilst it was attached to a roof rack… which wasn’t all that hard to do, considering I had strava, chip timing info, and a couple of people who were willing to vouch for me (including a professional photographer who took a photo of my broken bike on course when I walked past her), and a solid lack of owning a roof rack or being friends with anyone who does.

Don’t expect that sort of treatment from all bike companies. There are some out there that would have given me a warranty shock and crash replacement pricing (maybe) on a new frame, rather than a warranty. Pivot is pretty rad, though, and in the words of their warranty guy, “we want you to be stoked on your bike.”

That, I am. I should have a new Mach 6 back in the stable any day now.

One thought on “The Golden Giddyup that Wasn’t”