It’s only been a month-ish… but I’m just gonna pop in here and drop a post like it’s been last week.

In my previous post, I told you about the failure of my Fox shock. I’m happy to report, Fox warrantied the shock, and Pivot warrantied the front triangle (after I proved to Fox that I didn’t run the bike in to a garage door).

Enough about that, though, there are adventures to report.

I’ve got very little free time. Yeah, I hear those of you with kids laughing/groaning/whatever. It’s not my fault you baked up some new little humans to engulf your mornings/nights/weekends, so, I’ll say it again… I’ve got very little free time. I try and make the best of every second of it, which explains my lack of recent postings. If you really want to see/hear some snippets, I’m on the internet in other places, like the Just Riding Along podcast, Instagram, and Twitter.

It’s here, though, that you get the whole story of the snippets. I’ve got a lot of stories, but my favorite of the last month-ish is definitely my gravel ride out of Boulder. I used a combination of my limited local knowledge and a site called Coloradogravelroads.com and mapped out a route that turned out to be amazingly rugged.

I started from the shop in South Boulder and rode the bike path up Boulder Canyon to Four Mile Canyon. The pedal up Four Mile is the longest bit of asphalt on the route… about 5 miles. It dead ends at Switzerland Trail- an ATV road that’s also a popular mountain bike route. There’s a really grouchy guy at that intersection that yelled at me from his porch to not lean my bike on the fence next to the Switzerland Trail sign. “It’s a CONSTANT problem”… according to him. 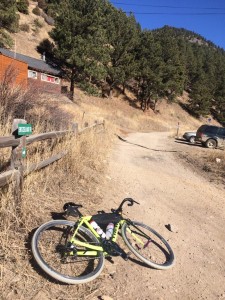 Switzerland Trail isn’t bad on a CX bike. I’ve actually ridden it on my road bike a couple of times as well, though, I wouldn’t really recommend that to anyone. As you climb Switzerland Trail, you get to periodically peek at the high mountains in the distance and start to get that warm, fuzzy feeling of isolation. 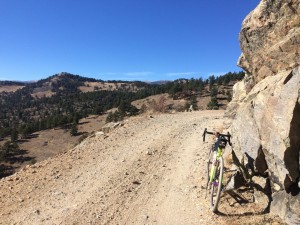 Once I was on Gold Hill Road at the top, I stopped to eat and saw a bald eagle. I tried to get a photo and managed to fumble part of my pop tart on the ground and get a blurry pic of my feet. The eagle was still pretty sweet, though. I still ate the pop tart… you know- five second rule & all.

Gold Hill road has a few steep spots, and it’s up where you start to really feel the elevation in your legs. I eventually made it to the peak to peak highway, where I headed south for a mile or so before turning off on to the next forest roads- FSR 116 and 505. Those took me to the high point of the day- topping out somewhere around 9,400ft at mile 32. They’re definitely the best part of the route. 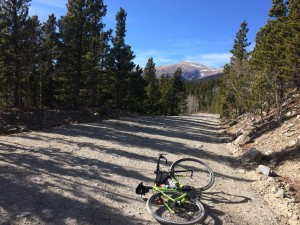 When I saw FSR 505 on the map, it wasn’t clear as to how rugged it would be. It was a varying combination of chunky like in the photo to smooth flowy dirt and everything in between… including ice. 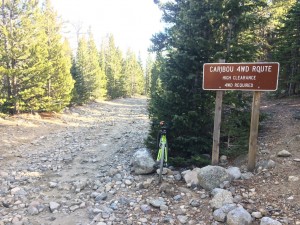 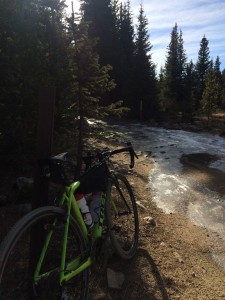 I dropped down in to Nederland from there and stopped to refill a bottle at the local coffee shop/cafe. I needed to get to Magnolia Road to take me back down to Boulder, but rather than climb out the obvious way on Peak to Peak highway, I rode into a neighborhood on the south side of town and took a small singletrack connector into/through the East Magnolia trail system. There was a little hike-a-bike involved… a trait of any and all excellent adventures.

I didn’t take any pictures after Nederland. I was a little worried about getting back to town in enough time to get to Doggie Day Care to pick up Indy. If they closed before I got him, I’d probably sit outside the door and cry or something. So, I was making haste. The only part of my planned route that I messed up was taking the Winiger Ridge trail out of a neighborhood off of Magnolia. You can see on the route that I turned in and missed where I should have gone to get to the trail. Oh well… next time.

The last of my gravel was one more chunky 4WD route called 68J. It connects in to the back side of Flagstaff Road, which goes directly back down to the shop. That last little 500 foot kicker up the back of Flagstaff really builds character at the end of a route like that.

I can’t wait to do that one again, though at this point, I’ll probably have to modify the far end of it to stay lower. I’m guessing that the last weather that came through put the first real layer of snow on FSR 116 and 505. So, I’ll likely take the southern spur of Switzerland and connect to County Road 103 to go south to Nederland- not as wild or rugged, but still pretty fun.

I’ve got a lot of Boulder running adventures to post about soon. The trails in the Flatirons are incredibly challenging, so I’ve taken to them like Br’er Rabbit to the brier patch.

Posted in Trail Riding
Hi, I'm Andrea! This blog is a journal of the highs, lows, and challenges in my constant search for adventure