As Winter is (very) slowly starting to take a hold on the mountains, my plans for the next year are starting to gel. First order of business- learning how to ski. I’m still holding fast on part of my original plan of “winging it” on some of the local railroad grade and trail for classic-style Nordic skiing. However, I’m slightly modifying that with taking some skate skiing lessons at Tennessee Pass first. I’ll likely be on rental skis until I really figure out what I like and how far I’m willing to travel for the sake of exercise. Leadville is about an hour and half away, but considering I used to commute 45 minutes each way (on low traffic days), 5 days per week in Denver/Boulder, I don’t think one day a week of driving to Leadville is a big deal. There’s hardly any traffic, and the scenery is, well… effing amazing. Skate skiing seems like a pretty amazing way to build some Winter fitness, but it takes some groomed trails. Classic skiing is closer, but I’m not sure if I’ll enjoy it quite as much. Time and experience will tell.

My main 2018 objectives are set on three specific feats of strength- the 200something mile bikepacking route I’ve plotted (and failed to complete because of cold/weather/Raynaud’s), Rainbow Trail in a Day (on bike), and a traverse of the north half of the Sangre de Cristo mountain range (on foot). Rainbow Trail on foot is still in the back of my mind for sure, but the other two are top priority at the moment.
I’d likely take on the Sangre traverse with my newly found friend Liz, who I met at the group runs out of 7000 Feet Running Company (the “LRS” of Salida). Liz and I have already tackled some pretty rad day hikes in the Sangres- Like the one where we tried to go to Electric Peak, but there were 40-50ish mph winds at the saddle we’d aimed for prior to traversing the ridgeline to the peak. So, we took this pic and went back from where we’d come from. 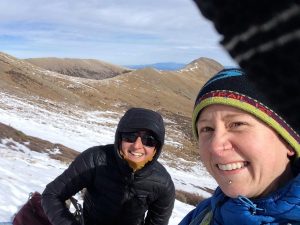 The process involved with prepping for those goals over the winter is equally as demanding as prepping for a race season (if not moreso). Rainbow Trail in a day is no easy task. It’s likely going to take longer than any other 100-mile race I’ve ever faced. At the same time, I need to maintain an ability to travel quickly on foot to keep the North Sangres Traverse in mind.

I’ve been basically JRA (R=riding/running) since Vapor Trail. I’m going to visit Memphis and Arkansas sometime after New Year’s. Following that, I plan on increasing my running distance while simultaneously beginning some trainer workouts and adding in Nordic Skiing to get me prepped for another strenuous bout of early season riding. It worked out well for racing last season, so I’m hoping to get the same killer legs for next summer.

While I’m back Southeast, I might do this:
http://www.runarkansas.com/ABF/index.htm

I did it once back in the day. Depending on how I’m feeling, I might give it another go. It’s billed as the most difficult trail marathon east of the Rockies. Honestly, after being out here for a few years now, I’d say it’s on par, short of the high elevation. I’ve had a touch of plantar faciitis, but I feel like I’ve got it well-controlled by switching from Altra shoes to La Sportivas and adding some custom insoles to the shoes I stand in at work every day.

I always try to keep an open mind for whatever comes up, but it’s nice to have at least a vague direction to travel in to.