Winter is tightening its grip on the Front Range. I’ve taken a lot of my physical activity indoors with the recent revisiting of MMA. You might remember last time that I trained a good bit in MMA, I lost a fight and ended up with a broken-as-hell nose. In the following months after that, John Trent, who I’d been training with, sold his gym, and I was only able to get back in for Jujitsu classes for a few months before moving away.

Fast forward, and now that I’m not living high up in the mountains a long drive from civilization, I’ve found a new MMA home at The Training Camp. I’m starting slow, unlearning a few bad habits, honing good ones, and learning piles of new ones. There’s a large amount of experience under one roof there. I’m looking forward to trying out for the competition team in January.

Speaking of competition, one of the master’s dudes from Memphis finally got popped for doping, this time for testosterone and Ritalin: Master’s 40+ Winner Busted

It’s sad in lots of ways… mainly because I know Todd Hickman is a really nice guy. If you didn’t click that link before you met him, you’d think so, too. He’s never the guy that you hate to see show up for a group ride. I’ve always suspected that there are other 40+ dudes in Memphis who are taking testosterone (and/or ritalin, which is just as easy to get a script for from your family doctor). Most of those dudes have gigantic egos and tend to reside on the “asshole” end of the “how nice are you?” scale. So, it’s sad that it was Todd and not one of them.
It’s sort of like if a group of cars passed you on the interstate doing 110mph. One of the driver tailgates you and flashes his lights at you and another one seems to exercise some sort of common courtesy to pass you before speeding back up to his group. Later down the road, you see that the one who’d not acted like a dick has been pulled over by a Trooper and the rest of the group continued on without him at 110mph. You’re glad that one driver doing something dangerous is off the road, but you wish it was the dude who’d acted like a jerk.

I hope that Todd’s experience and punishment (4-year ban) is a wake up call to any other Memphis-area masters racers who are riding down the same road. I hope that Todd comes back clean in 4 years and continues to ride and race, because he’s a kind-hearted person who screwed up real bad.

Maybe I’m naive in saying so, but as a female, I feel like there’s much less concern about my competition being dopers (with the exception of maybe some of the upper-level racing I’ve done). For one, a 40 year old woman can’t waltz in to her doctor’s office and claim sexual dysfunction in order to get a (out-of-competition) legal prescription of testosterone. So, we’ve got that going for us. Also, women generally just get faster with age (to a point, of course). Outside of confounding life factors, it’s not like a 35 year old woman can tell a huge difference between her ability to train and recover the way she did when she was 22 because of a change in her hormone levels. While the allure of things like stimulants and EPO might still be there, the draw to take testosterone is less than that of men.

I went back South for Thanksgiving last week. Unfortunately, the weather was terrible, so my plan to hit Syllamo on the way back home was thwarted by torrential amounts of rain. I did get to ride bar bikes with Kenny one night 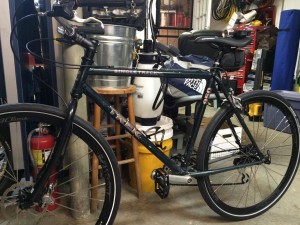 We cruised Germantown neighborhoods then stopped at Huey’s for burgers. I’ve taken to ordering an Old Fashioned at any bar I go to, just to see what I get. While it’s an incredibly simple drink, what usually comes out it some sort of watered down shot of whiskey with a cherry and an orange slice in it that may or may not actually contain bitters. I’ve only found one bar so far (the Golden Moon Speakeasy, where my love of Old Fashions first began) that actually makes one as good as (better, actually) what I make in my kitchen.

Low point? Getting a speeding ticket two hours from being back home in Denver. The trooper had no mercy on me even though little Indy was crying/howling in his crate because he had to potty. If you’re wondering, the price of doing 82mph in a 75mph zone in Colorado is $98.50.

That’s mostly it for now. Time to do some yoga before work.

Posted in Bike Racing, MMA
Hi, I'm Andrea! This blog is a journal of the highs, lows, and challenges in my constant search for adventure