When I started Breck Epic Stage #1 with 4 other singlespeed women, I really had no idea how the week wold turn out. My experiences there the previous two years have been that everyone rides kinda hard and the race ends up unfolding on its own with generous time gaps between the participants. This year turned out to be very different.

On day one, Sara Sheets and I rode to the first singletrack together. However, after the first climb/descent, she disappeared in to traffic going up the next climb. I figured it wasn’t worth chasing my ass off on the first day, so I just kept it steady and finished 4 minutes, 27 seconds behind her. That’s nothing in stage racing. I was stoked.

What followed after that was the hardest 4 days of riding either of us could possibly imagine. I rode downhill with reckless disregard for personal safety because I knew I could out-descend her and make her chase. However, by the last descent of stage 3, she reduced my downhill advantage to an easily surmountable gap. We traded uphill blows as well, both riding and hike-a-biking. We’d periodically battle from the time we cleared starting-climb traffic until we would get to the final descent of each stage, absolutely exhausted, and she’d let me roll ahead of her and finish a few seconds ahead. According to the power numbers, we raced each day a little harder than the previous. It was sort of nuts.

You can hear the daily reports (and some early-week interviews with other racers) on the JRA Mountain Bike Radio Page: http://www.mountainbikeradio.com/just-riding-along/breck-epic-2015/

We finally relented for Stage 6 and rode at a friendly pace for the shorter/easier final stage. It was a relief to cross the finish line. I think we both couldn’t quite believe what we’d just been through… 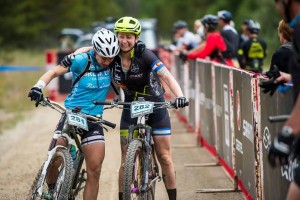 I had a lot of people ask about my bike setup for the race. Steve Domahidy of Domahidy Designs was nice enough to let me use one of his Ti Hardtail frames. I put a Pike on it (the one off my new Pivot 429sl) along with Industry Nine Pillar Ultralite Carbon wheels, a Quarq powermeter, Endless 22t Kickass cog, a dropper post, Ergon grips and SMC3 Saddle, and some beefy-ish Maxxis tires. I took that bike through Hell and back, and everything was incredibly solid (and comfortable as well). 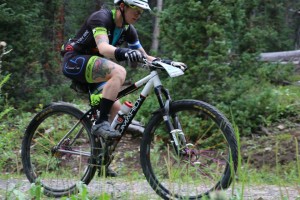 Gu Energy Labs (Daily, I consumed somewhere in the neighborhood of 3 scoops of Roctane Drink, 3 scoops of Gu Electrolyte Brew, 7 Roctane Gels, and a bottle of Recovery Brew)
92Fifty Cyclery
Elevated Legs (every day for at least an hour!)
Smith Optics

There were also some great photographers on course, and I’ve been sharing a daily pic or two on my Facebook page.
Devon Balet
Eddie Clark (responsible for the great stage 6 finish photo above)
Micheal Kane (took the other nice shot of me riding)
Liam Doran

Mike McCormack and his army of staff & volunteers put on an amazing event.