My participation in the Beti Bike Bash marks my one year of racing in Colorado. Last year, I’d been reminded the day before the race that it was happening, and there was a singlespeed category. I’d gone in to it with no expectations and was extraordinarily surprised when I won against a relatively large group of singlespeeders (race report HERE).

This year, I felt far more prepared. I ran the same gear (34×21). Even though I’m a few watts faster, I remember it being just right- meaning that by the last lap, I was contemplating walking one or two spots on the course. The course itself is excellent for singlespeeding. It’s basically up a punchy climb, across the top of a ridge, then down a flowy/pumptracky/kitty-littery descent.

Side note- I realize that some of you reading may not know exactly what I mean when I say “kitty litter.” Imagine if you covered a concrete surface with kitty litter. It’s like that. Not a lot of traction.

Also noteworthy of my bike setup- Shimano warrantied a pair of XTR brakes for me last week. I installed the new brakes, rode them once around the park near my house, and, Saturday night before the race, the rear one puked mineral oil from the caliper on to my living room floor. By morning, the lever was mush, and I did a morning-of swap to a set of XT brakes off of Matt’s bike. Jeebus.

This year, an extra difficulty-factor was the heat. It was pretty damned hot out there- somewhere in the upper 90’s (some claimed 100). However, this is something I don’t mind at all. See, in Memphis, it’s the same temperature, but with very high humidity. I sweat a ton, and when there’s humidity, that sweat is just a useless loss of bodily water. When the humidity is literally single digits, all of that sweat evaporates, taking excess heat with it. So, as long as I was moving, I felt extremely comfortable. I will admit, though, as soon as I stopped, I felt like I was melting. The sun here is more intense than I can describe in words.

An extra ally in my heat protection was Matt. He came to the race with me and soldiered through the sun in the feed zone, dumping ice water down my back and handing up a bottle of cold water for my last lap. He was possibly more wrecked from race day than I was.

Back to the actual racing-

Because of the heat, participation in the race was down from last year. There were 15 pros (only 14 are listed in the results, but I saw at least one more walking in with a mechanical), 16 experts, and only two other singlespeeders. I went in with the goal of winning singlespeed and setting a time that’d be worthy of pro-level competition. We lined up last of the 3-lappers, and, when given the signal to start, I went for broke. When I made the turn in to the singletrack, I glanced back and saw that the other two ladies were waaaaaayyyy back. I put the hammer down with the intention of catching everyone ahead of me.

Because of the reduced participation, passing wasn’t quite as tedious as it was last year. Definitely still a thing, but not exhausting like before. I have an awesome Spurcycle bell, which is probably the most important piece of equipment on my bike. No racing singlespeeder should be without one.

I felt pretty amazing- uphill and downhill. Downhill, I’d still benefit from knowing the course a little better. There are a few off-camber/fall off the hill spots where I wasn’t smooth on any lap. Unlike last year, though, I could catch/drop other riders on the downhills. I found the edge of traction several times- your front tire makes a very distinct sliding noise on that surface, and I heard it more than once.

The end of the first lap came up so fast that I surprised myself. It was slightly less than half an hour. I couldn’t remember my exact time from last year, but I knew I was faster. Matt dumped what felt like a gallon of ice water over my back, and I soft pedaled for a few seconds to down some Roctane gel.

Side note- I opted to wear baggy shorts and my favorite tank top from the guy’s section of Target. It was wonderfully breezy, and allowed for the stowage of a gel flask in my cleavage pocket. The cleavage pocket is way easier to use than a back pocket, and, well… they’ve gotta be good for something.

On the second lap, my goal was to find the line between settling in but not going slower than I needed to go. I could feel a twinge of fatigue, but only if I thought about it. So, I didn’t, and I turned another lap in slightly less than 30 minutes. Matt dumped at least two gallons of ice water on me in the feed zone. It was so cold that I lost my train of thought and put a foot down to swap bottles instead of doing the super-pro throw/handup thing.

I charged the last lap hard. I still felt awesome, but I knew by the last climb that I had been riding outside of myself because my right quad started to cramp a little. Perfect timing. I’d never been so happy in my life to have a muscle cramp.

Singlespeed Winner, Faster than all the experts, and a time that would have placed me in 8th in the Pro category. I went 1:27:54. For reference, last year was a hair over 1:40. I took a little over 12 minutes off of my time. 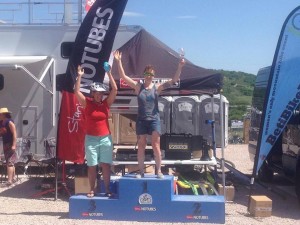 So now it’s rest up for next weekend’s Winter Park XC Superloop race. I’m going to keep the harder gear on my bike. I remember from last year that the Superloop was a very un-super singlespeed course because of some flat sections. I’m hoping that with my extra fitness that I can push the harder gear for the rest of the summer.

One thought on “Beti Bike Bash”