Jeez, it’s been two Winter Parks ago since I posted…

I’ve continued my trend of fun-rides and it’s worked out pretty well. Winter Park #4 was part of the Colorado Freeride Festival, so, unbeknownst to me, they offered a decent prize purse to the Pro racers. Even though some bigger hammers than usual showed up, I still could have finished in the money. Oh, Well…  I still picked up the SS win.
#4 was also my vain attempt at riding back to Lakewood from Winter Park. I’d planned accordingly with the exception of actually paying attention to the fact that finish times for that course were a full hour longer than the previous courses. I started up Corona Pass far too late in the day to make it through White Ranch before the sun started to set (and the park would be closed), so I ended up turning back just a few miles in to the ride. I decided that the only WPXC race with the right combination of “late enough that the snow has melted” and “early enough for the most daylight” is #3- the Race Rendezvous course.

Winter Park #5 was definitely the best course of all the courses. It was Point-to-Point style, starting in the ski area, and ending somewhere in the mountains west of Fraser. It was mostly singletrack, and played well to someone with both lots of fitness and very good bike handling skills. Even though I was singlespeed, I felt really good, so I took off after the Pro and Expert women up the first climb. After some jockeying for position in the first 5 miles, I was in 2nd place behind a young expert lady (who has been blasting everyone at a majority of the races. Despite my effort to try and chase her down, I never saw her, and I ended up 2nd overall, less than a minute ahead of Pro racer Kathy, who’d been chasing me all day. It was the perfect combination of course and fitness.

I discovered a new favorite (albeit too expensive to do often) recovery activity the Tuesday following the race when we went back to Winter Park with big bikes for some lift service riding. It’s like going to an amusement park, but with bikes and purpose-built downhill trails instead of sketchy-ass roller coasters assembled by carnies.

Somewhere woven in with all of that, I’ve been working my ass off. I did some mechanical support at Ironman Boulder. Triathletes are weird… it’s like a whole other sport that just happens to involve a bike. The bikes I saw were akin to a dog kept on a chain in the back yard- you definitely own it, but you don’t think about it much, and only really care for it enough to keep it alive.

The best part of the weekend was walking in to the shop tent and seeing another lady mechanic standing there. We shared a brief part of a second of surprise before getting to work fixing everyone’s clapped out stuff. Of course, I just took a picture of Knobby the dog, because that’s how I roll. 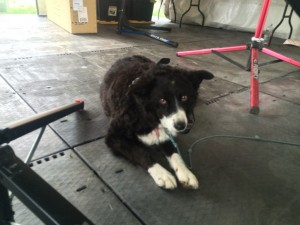 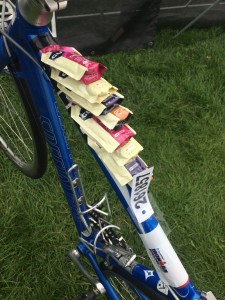 Also between races, I rode up to Squaw Pass. On the way down, I spotted a massive elk just chillin’ next to someone’s driveway just outside of Evergreen. If I had to guess, I’d say part of why he’s so large is because he terrorizes the local gardens. He also wasn’t very afraid of me. As someone highly wary of moose, I wasn’t very comfortable getting any closer than “across the road.” I don’t know how aggressive elk are, though I don’t believe I’ve ever heard of one trampling anyone. Better safe than sorry, right? 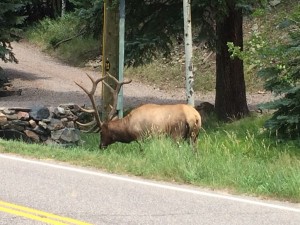 With one more Winter Park XC left, I’m going to switch it up a little for the final race (where there is, once again, some $$ available for the Pros). I’m going to put the Mach 429sl into XC mode with my carbon wheels and SID World Cup fork (it currently rolls on a Pike, because the Pike is awesome) in hopes of taking home a little cash. We’ll see how it all shakes out. My work/commute to Boulder has me pretty exhausted most of the time, so I’ve had to really make time to get a hard effort or two in before the work day. 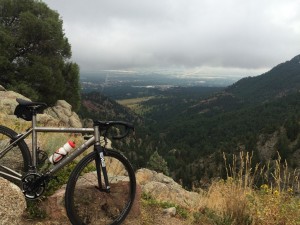 At least I work right at the base of a kickass climb up Flagstaff.

If all goes according to plan, this weekend after WP#6, I’ll go to the podium party then ride off in to the woods for an overnight adventure with my (former) coworker Amanda, Indy wrangler and bikepacker extraordinaire. 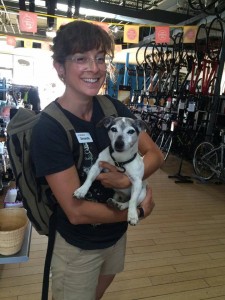 Posted in Bike Racing, Trail Riding, Training
Hi, I'm Andrea! This blog is a journal of the highs, lows, and challenges in my constant search for adventure