I’ve got a grand scheme of sorts that I’ve stared at on various internet maps since I moved to the area. MyTopo.com is an addictive resource- I start there, then, when I see a route I want to check out, I use a combination of a paper map of the area, Strava Heatmaps, and Google Satellite view to see if the road on the aged topo map is actually still in existence and open to the public. I’ve come up with a grand loop of the area, and the trip with Levi along with my most recent one this weekend served as scouting journeys.

This weekend, I wanted to check out the route to Tincup Pass. It would only take a handful of hours to ride there from Salida, but I wanted to use the route I’d come up with for my big loop, which meant taking the long way up through Aspen Ridge and Buena Vista to Cottonwood Pass where I’d then split off down CR 344 to the Green Timber/Poplar Gulch trail to St. Elmo at the base of Tincup Pass. I knew I’d be camping somewhere between Buena Vista and St. Elmo, but not 100% sure as to where, and my plan was to ride Tincup Pass and loop back to Williams Pass and back home the next day.

I packed up, dropped Marley off at dog daycare, and started up to Aspen Ridge around 9am. The aspens are just starting to get patches of yellow, and the intermittent views of the Arkansas River Valley below were really cool, albeit smokey. 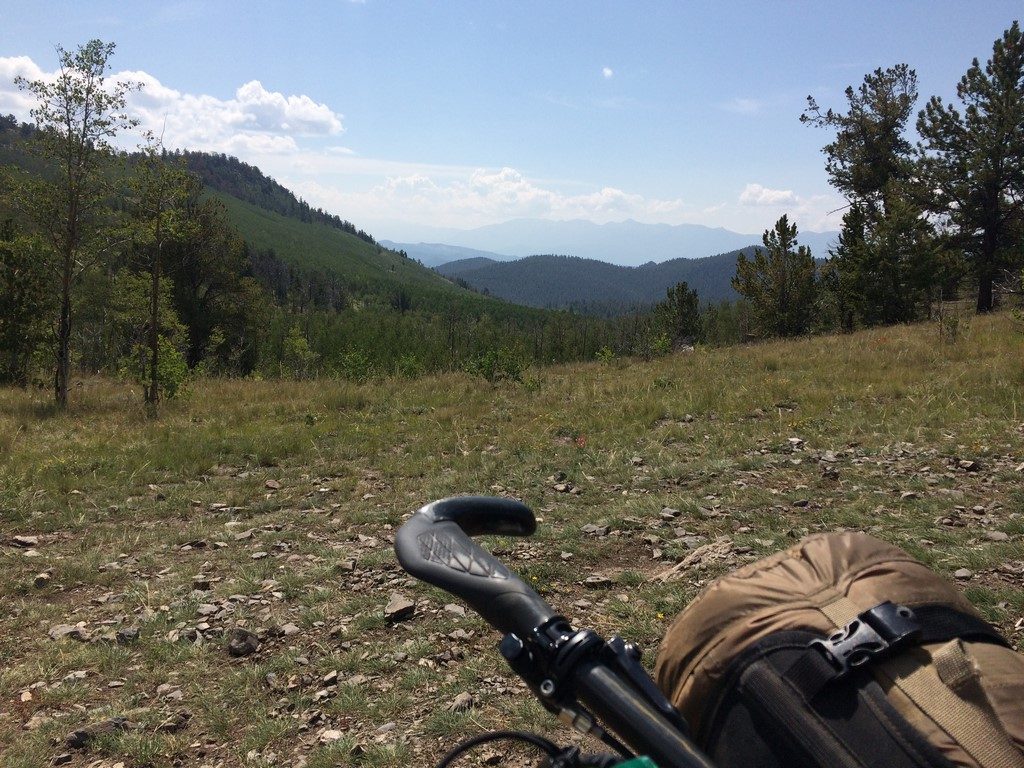 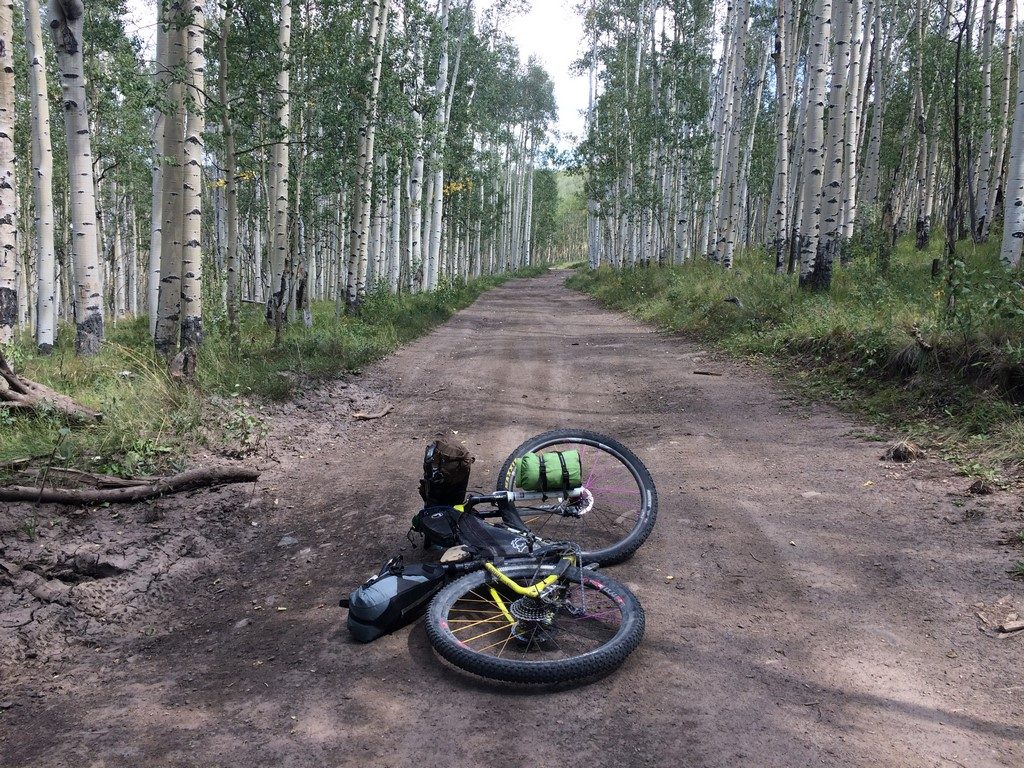 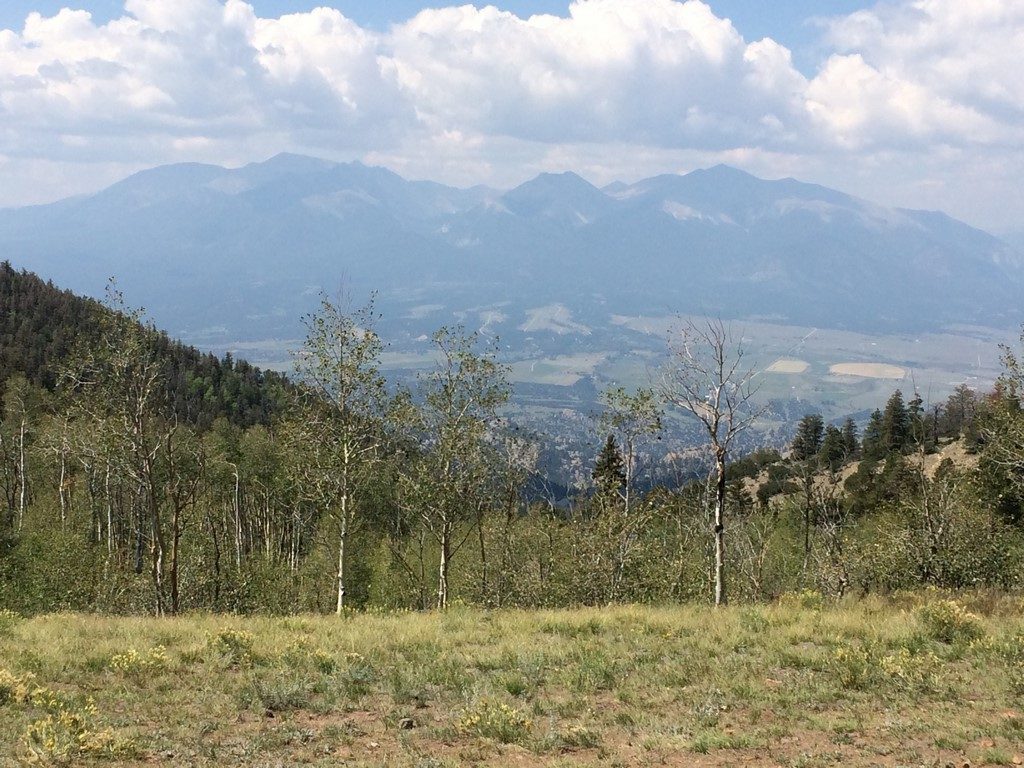 From the top of Aspen Ridge, the route generally descended down through the Castle Rock area towards Hwy 285 a few miles east of Buena Vista. At 285, I completed the scariest part of the journey- 3/4 of a mile on the highway with a narrow shoulder and a ton of holiday weekend traffic (on the map, I’d seen a connecting “road” that paralleled the highway between CR 315 and 305, but it was indistinguishable in the scrub). I turned on a really bright taillight, waited for traffic to clear, and had at it. It wasn’t quite as bad as it could have been, but it wasn’t fun. Luckily, it was short.

I arrived at the Midland Bike Trail ready for lunch. 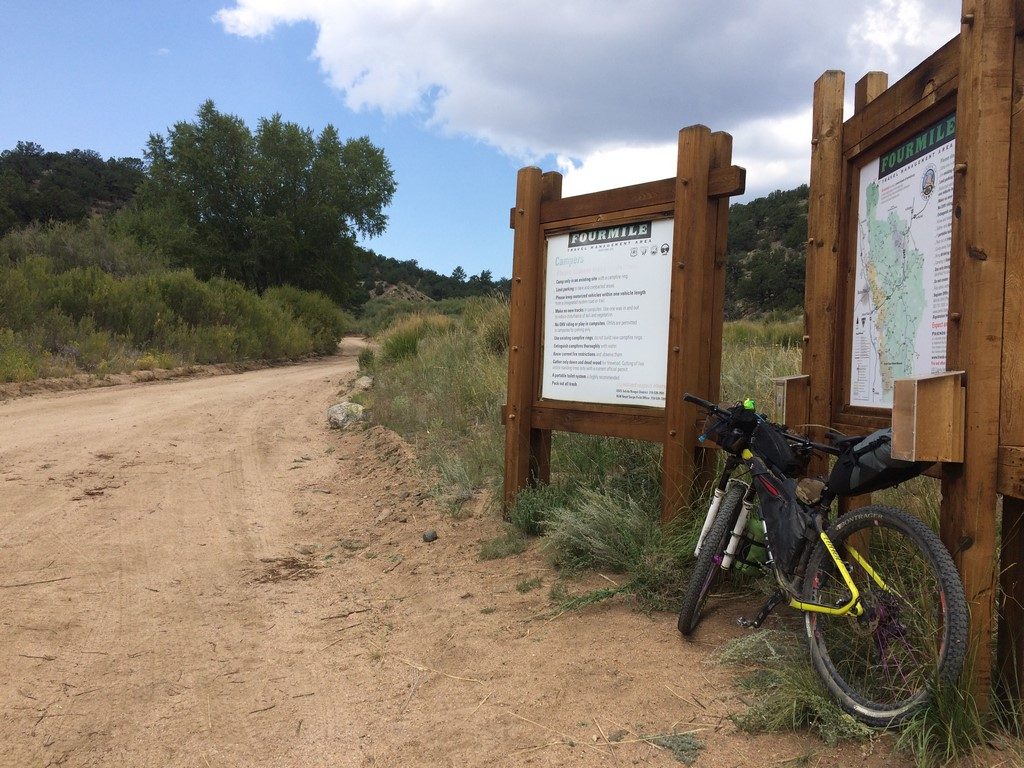 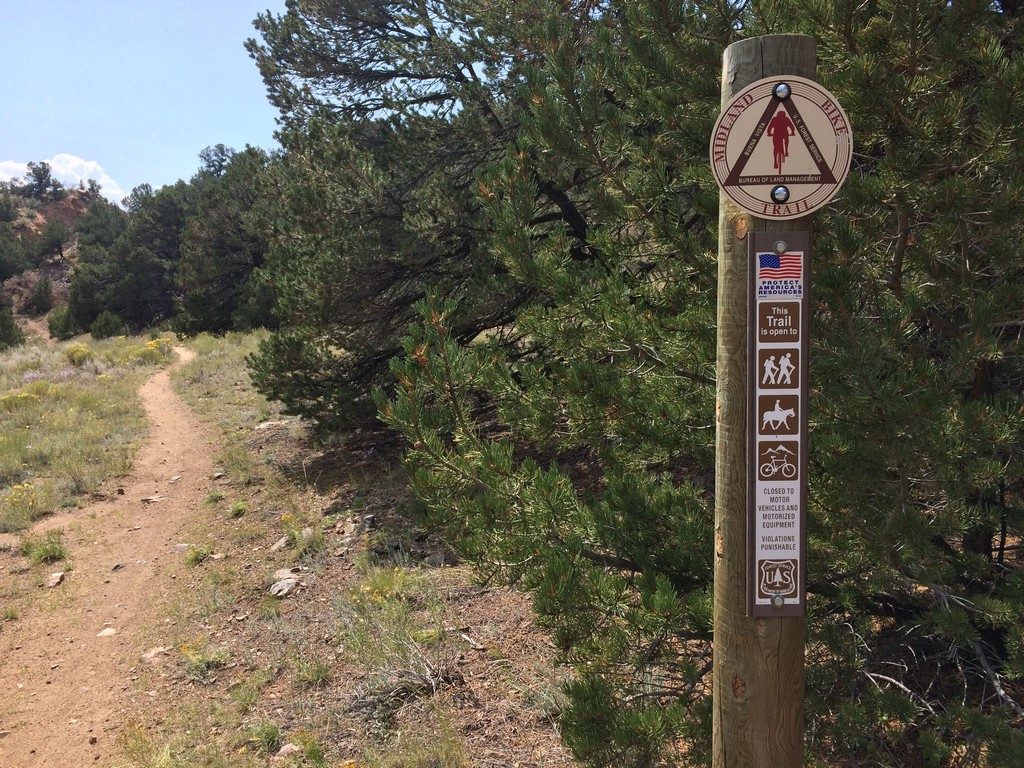 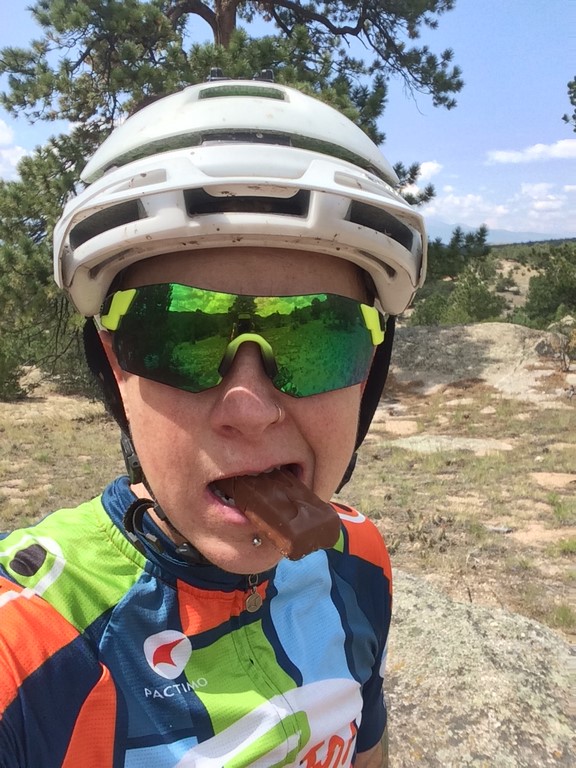 It’s a really cool trail- mostly singletrack on an old rail bed, punctuated by technical bypass dips where the old trestle is gone. I arrived in Buena Vista and refilled my water from the river instead of from a fountain- something I’d regret later, but preferred at the time, because filtered river water tastes way better than tap water from the trailhead fountain. 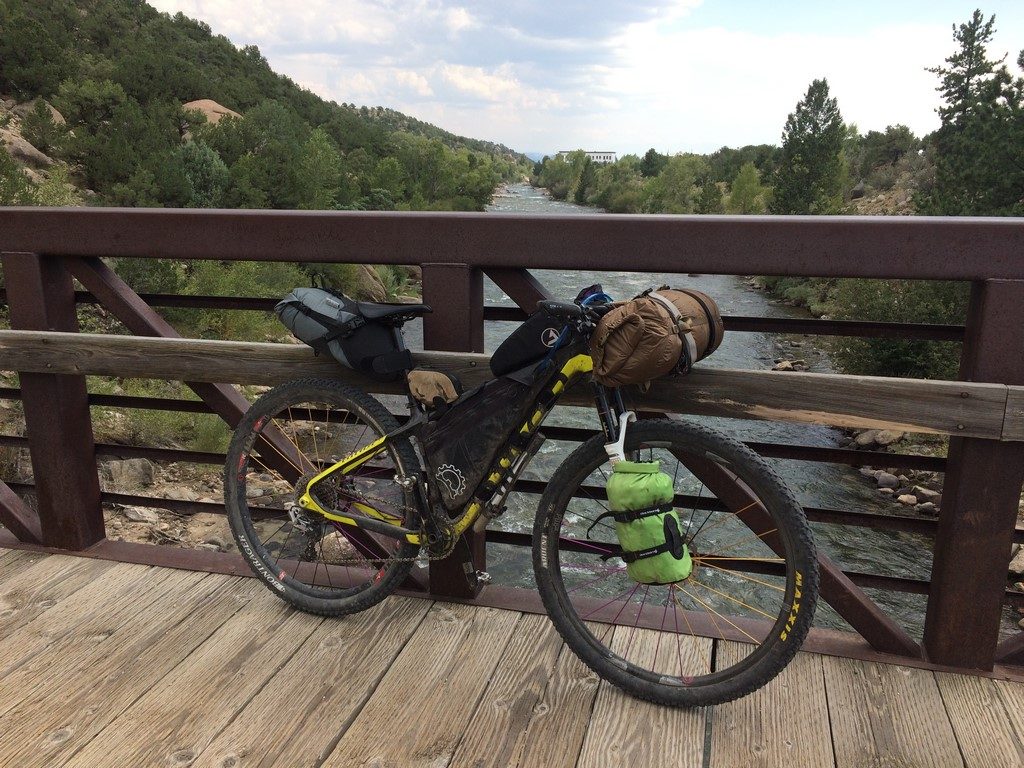 The next portion of my route was some more road out Cottonwood Pass to CR 343. It was a little hot, and there was a little traffic, but the view was nice. I was pretty glad to be off pavement once I was there, though. Once I was on gravel again, I ate some more and continued up the climb towards the Green Timber Gulch trailhead. Somewhere along that part, the distance, elevation, and hours traveled started to get to me. I got tired and cranky, but the view and the temporary leveling off of the grade along Cottonwood Lake soothed me a bit. I was glad that I still had a few hours of daylight to get up higher on a trail, because the valley was full of weekend campers. 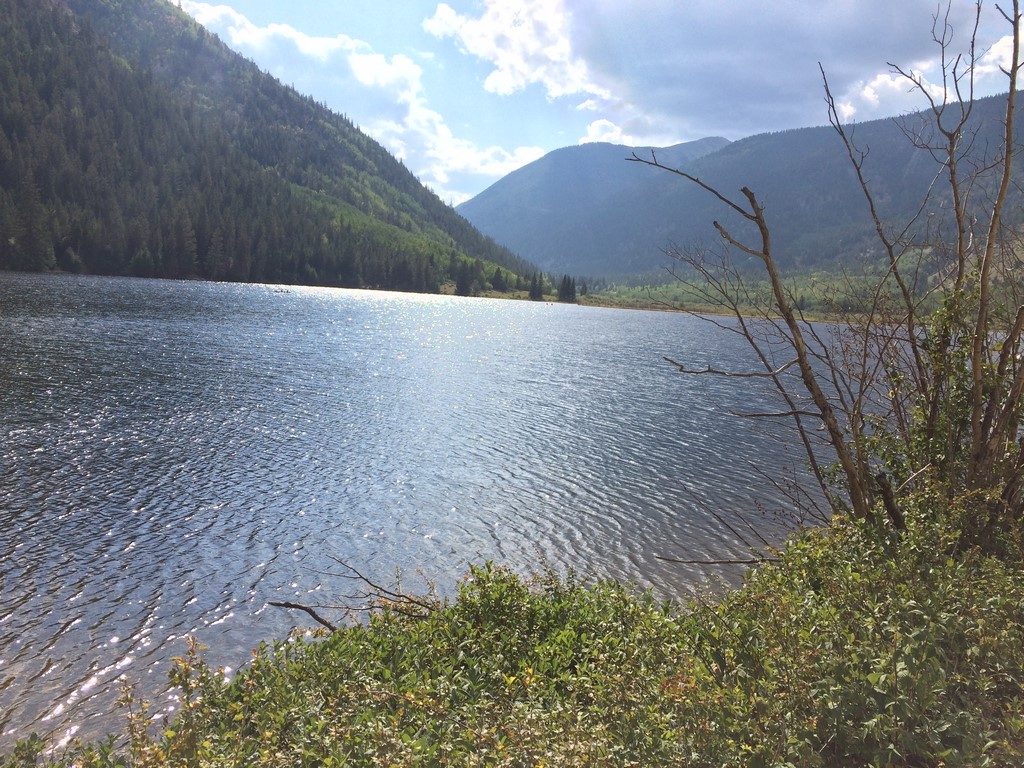 I finally reached the trailhead just before 5pm, where my plan was to fill my water and head up to treeline to camp. 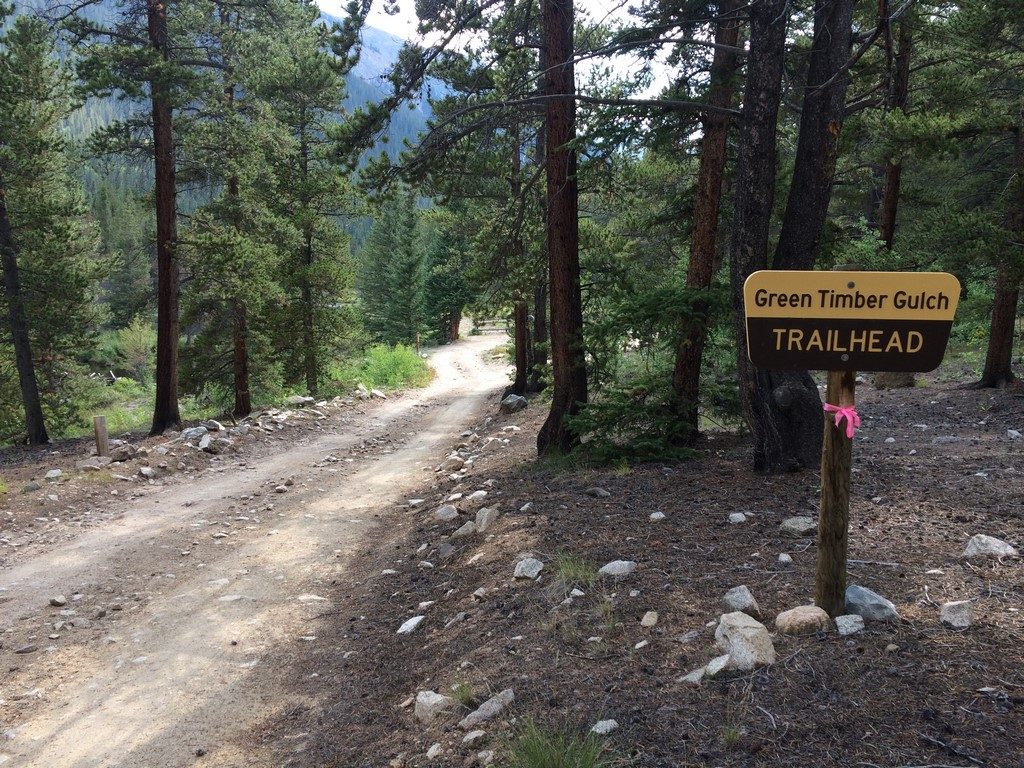 I knew the trail would be rough, steep, and mostly hike-a-bike, especially with the loaded hardtail. I stopped to refill my water and found that my MSR Trailshot filter was clogged- something that I’d heard of, but not yet experienced (Chris Plesko nearly succumbed to dehydration during the Colorado Trail Race when his did the same thing, and Levi reported something similar. You’d think I’d learn to take a fresh filter with me when it really mattered). I removed and flushed the filter repeatedly in order to get at least a trickle of clean water out of it. Eventually, I nursed it back to semi-health and was able to refill my water, though I’d wasted about 30min of daylight in the process.

I started the hike-a-bike at around 5:20, and told myself that I’d begin looking for camp spots at 6. The combination of thick tree cover and the gulch I was traveling up meant that the light would fade slightly earlier, and I wanted to set up camp and get to cooking dinner before sunset. As far as hike-a-bike goes, this one was one of the hardest I’ve ever done- especially at hour nine of a long day of pedaling. 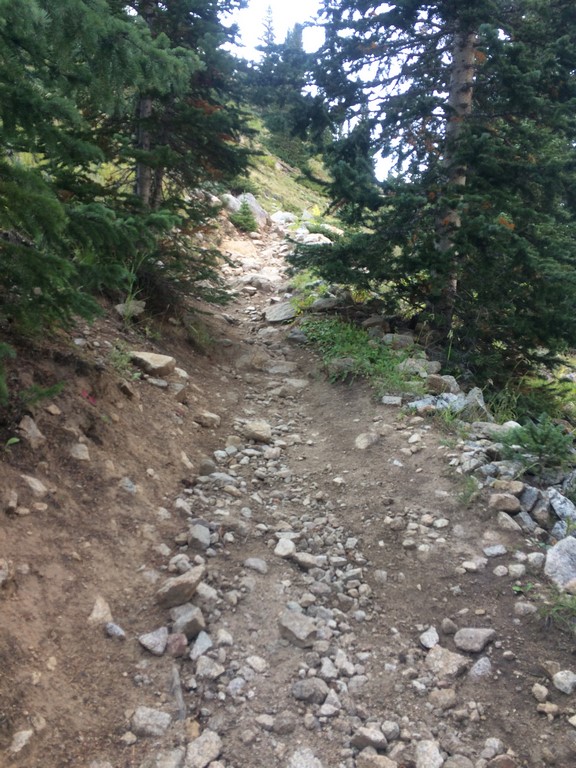 It was pretty scenic, though. 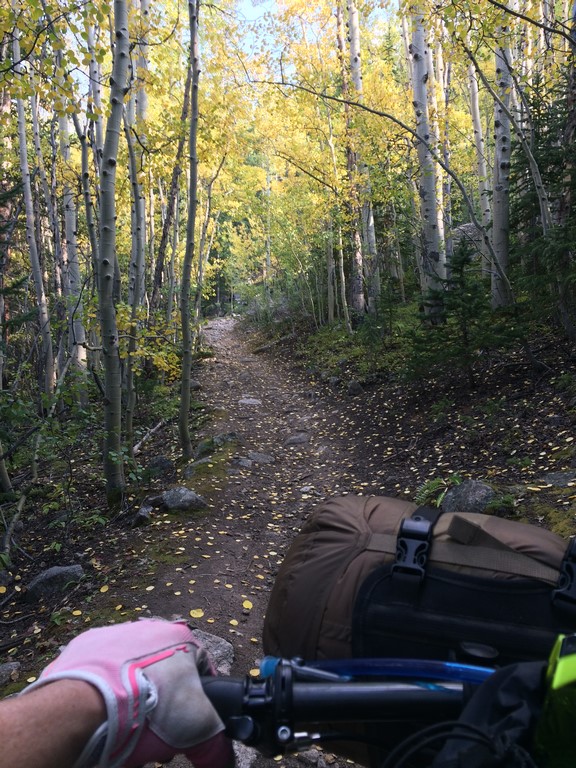 Sometime around 6:20, I passed a flat-ish spot in the trail. At first, I kept going, determined to find a spot closer to treeline that’d rival the Sargent’s Mesa spot I’d camped in with Levi. The sun peeking over a distant saddle drew me up like a siren, as its presence through the trees indicated that I was close to the elevation I desired. However, I stopped at the next really steep hike-a-bike, looked at my GPS, and realized that I was already at 11,600 feet and that the trail would not really level off again until almost 12,000 feet where it turned to make the final push to the summit. I decided to turn back to the small flat spot I’d passed a minute earlier.

It was, admittedly, too close to the trail according to the ethics of backcountry travel (I was at least far from water, though). However, it is a seldom-traveled moto trail, and I was, as I’d find out while setting up camp, way more exhausted, cold, and low on calories than I realized when I was still moving upwards. Being a seasoned endurance athlete nearly got me into trouble, as I’d been ignoring all of those things in the pursuit forward motion.

I noticed the cold first, and, as I unpacked my warm camp clothes, immediately stripped off my damp cycling kit (I told you it was secluded), dried myself off, and bundled up. It took a huge mental effort to pitch my tent, including 4 tries at getting the correct side of my rainfly facing up. I’ve been that cold/tired/bonky before, though, so I kept it together and soon enough, I was sitting in my tent watching dinner cook. 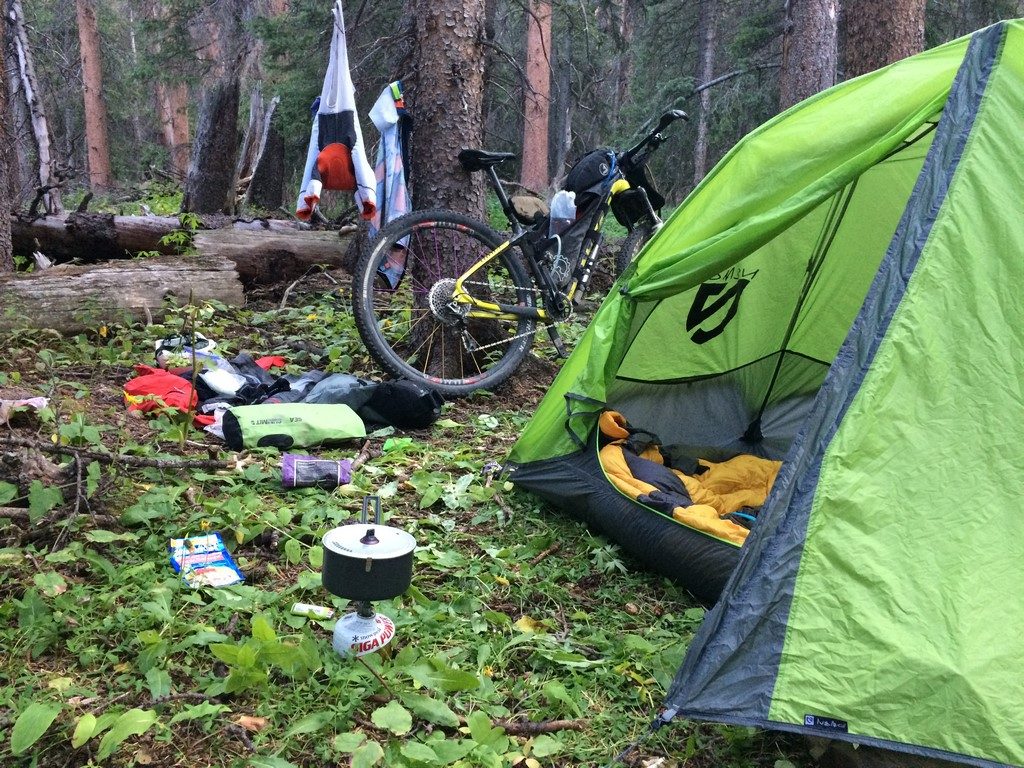 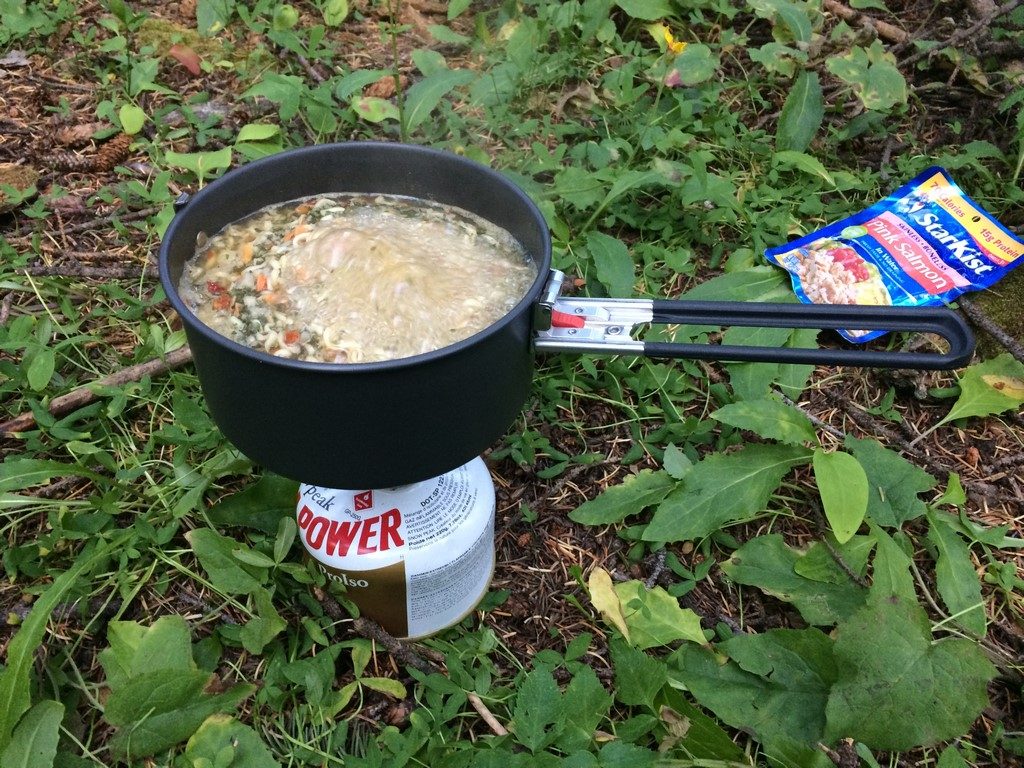 The best part of that camping spot was that it was totally silent of all things human. I could hear the woodpeckers’ toenails on the trees around my tent. The result of warm food, lots of pedaling/pushing, and total silence was falling asleep before it was even dark. My tent was like a sensory deprivation chamber in the middle of the woods- the sort of quiet where your heartbeat and breath seem loud.

I never sleep great in a tent, especially at that elevation. So, I had weird dreams and woke up three or four times. Eventually, I woke up to creeping morning light. I made some instant coffee and oatmeal before packing up to continue my bike pushing adventures. 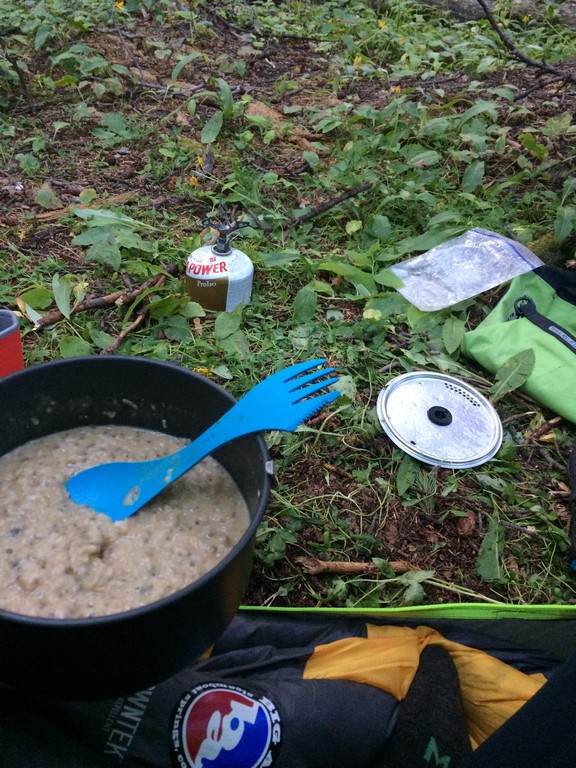 My read on the topo lines of my GPS were spot on- I didn’t pass another place that would’ve been good for camp until I was well above treeline, which would’ve been another 20-30 minutes of pushing and another 500 feet higher/colder. Even the first view above treeline was a little too sloped & rocky. I would’ve been in the basin just below the summit. 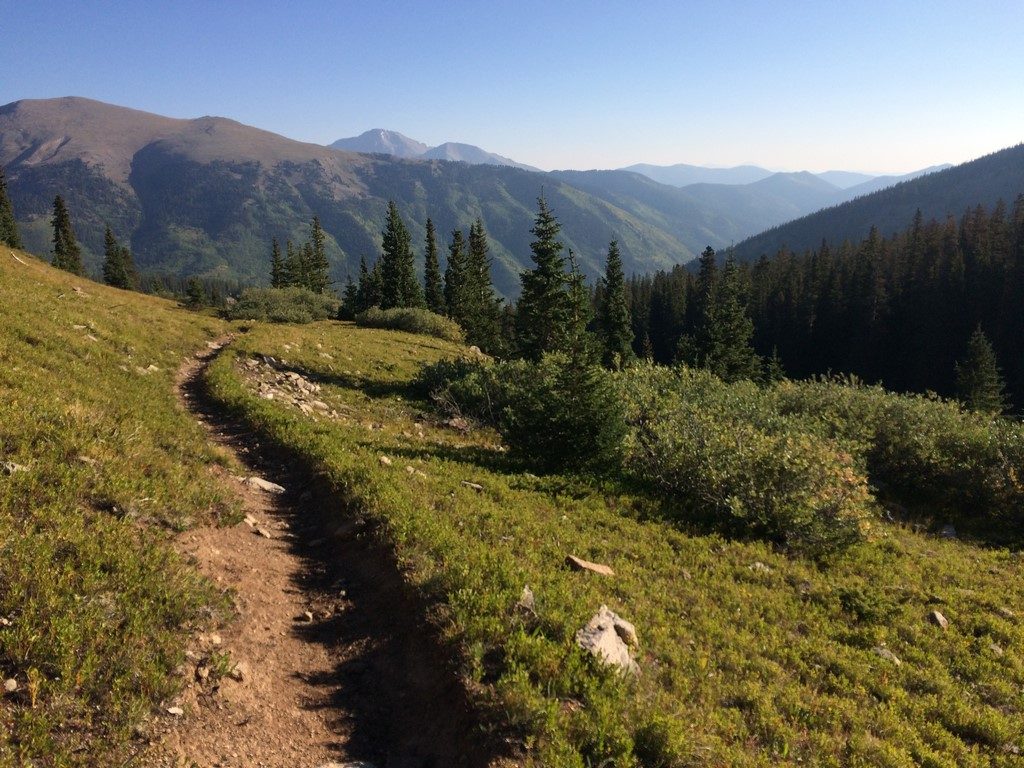 The summit was about another 50 minutes of pushing from my campsite, and was gorgeous (as always). 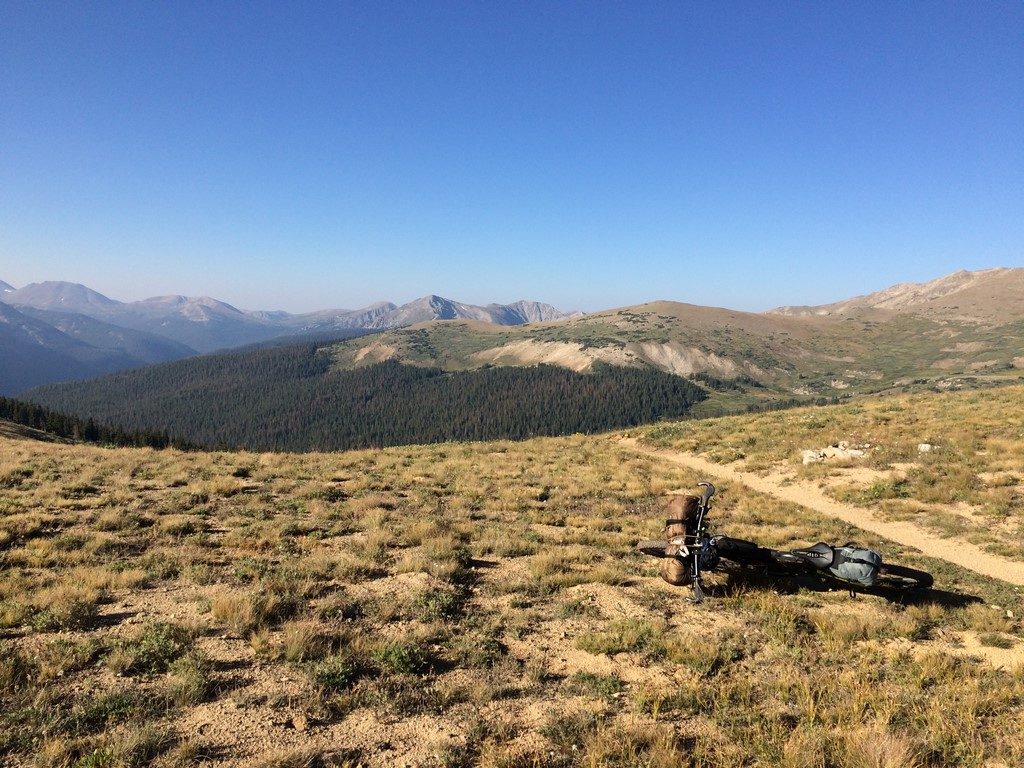 At the top, the name of the trail changes to Poplar Gulch. Despite the fact that I had to hike-a-bike 99% of the 3-ish miles of the Green Timber Gulch trail on the way up, I was glad I’d gone that direction, because the Poplar Gulch trail was slightly more moderate in grade and rockiness, meaning it was easier descending on a bike that’s a little sketchy at descending. 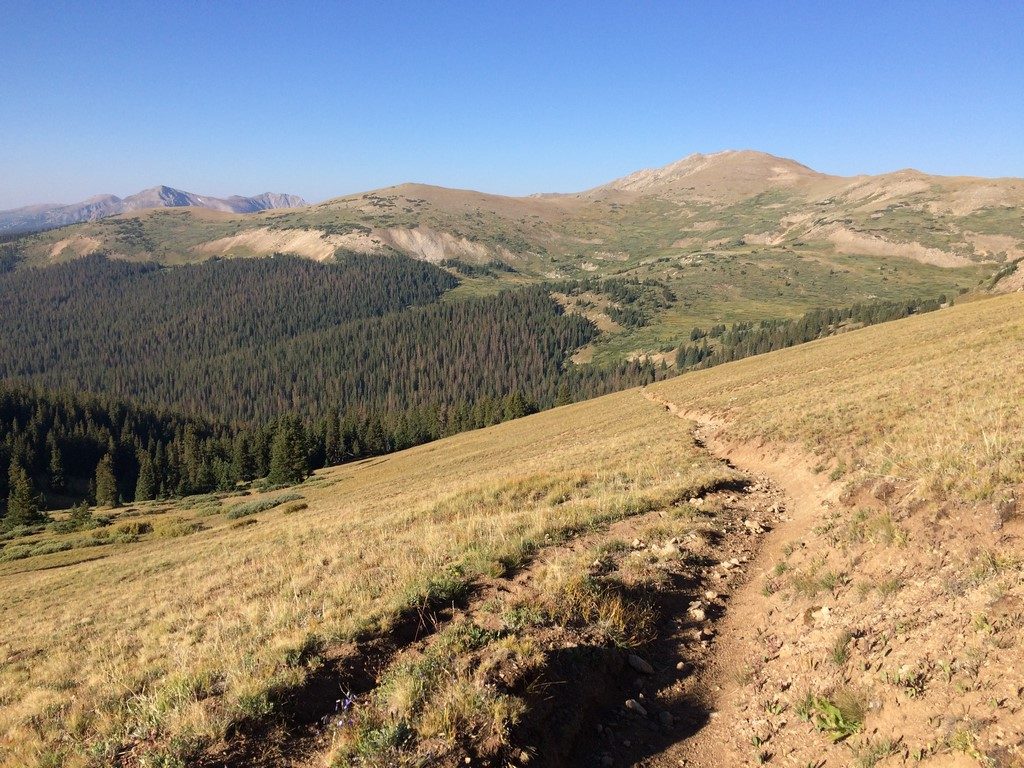 It was nice to feel the air begin to warm as I dropped down to the trailhead. 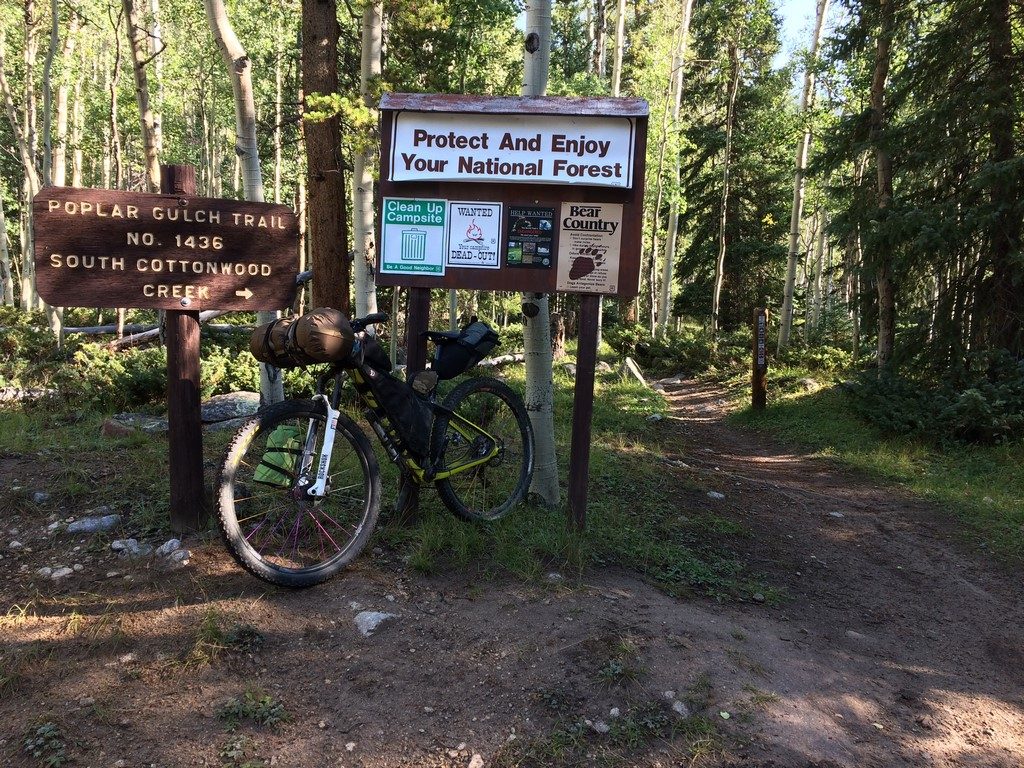 I rolled in to St. Elmo as the general store was waking up and ventured inside to buy a couple of bottles of water. 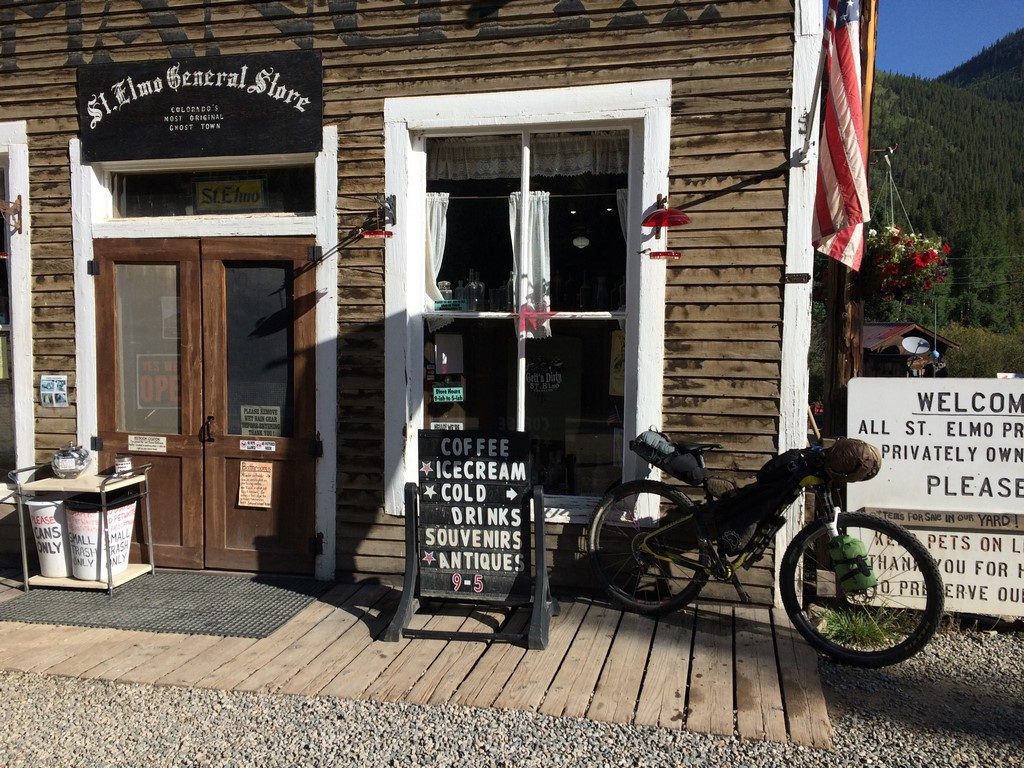 It was also the time of day that at least 50 (not exaggerating) off road vehicles of various sorts were staging to climb Tincup Pass. Ugh. According to the clerk at the store, “Tincup pass is going to be an absolute zoo today.” Given that, along with my failed water filter, I felt like the responsible thing to do at that point was to go home instead of continuing on my planned route. It was a little disappointing, as my legs felt like they were up for it. I just didn’t feel like dealing with a zoo of off-road vehicles. So, yeah- poor planning on my part in both filter and route considerations. I’m not too upset, though. knocking out that mileage & gain the weekend before Vapor Trail 125 may have been a bit ambitious.

Once I was home, I performed my favorite recovery rituals of eating and tubing. 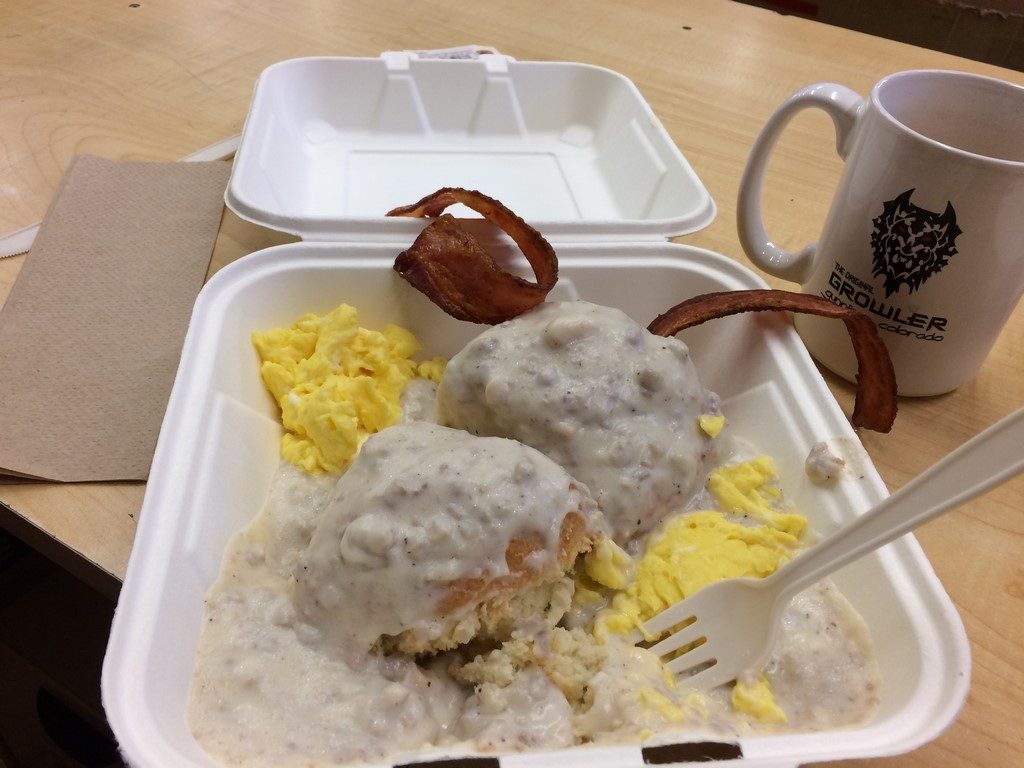 Afterwards, I picked up Marley from daycare. I’m not sure which one of us was more exhausted. 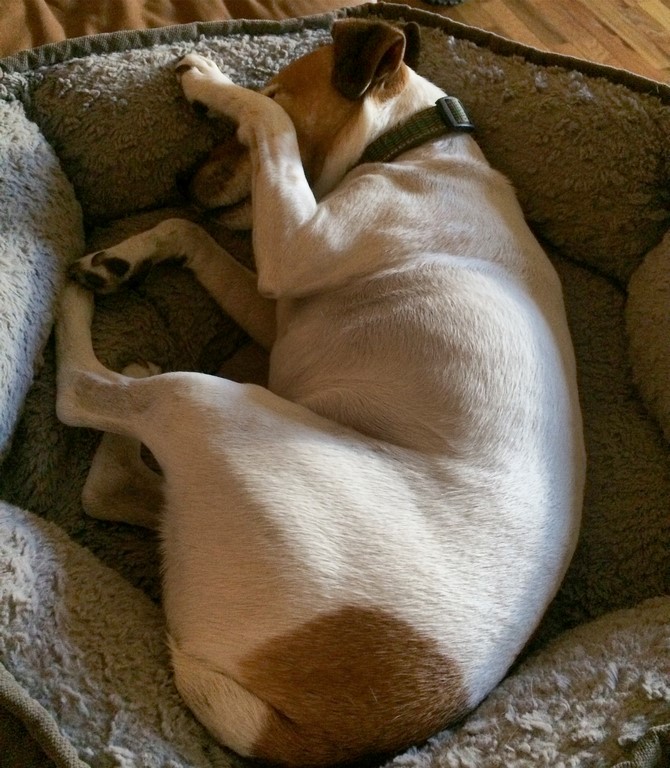 I’m excited for Vapor Trail this weekend, and maybe even more excited to get out more more than an overnight on my big loop afterward. I might even have a different bike to utilize as my pack mule by then, but I’m hush-hush on the details for now because they’re still in the works.