A couple of weekends ago, I was torn between several different choices in 3-day-weekend adventure. The Breck Epic was happening, and I strongly considered driving up to spectate and hanging out a few days. I was waffling on that when the guy who does the Singletrack Sampler videos came through the shop. I chatted with him a bit, and we talked about going for a ride down Green’s Creek in the morning. Then, I got a text from friend Levi, who was out on the Colorado trail, riding from Denver towards Durango… 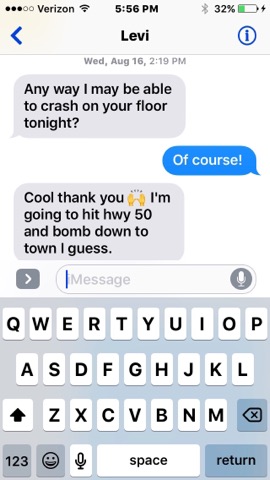 He arrived just before I was off of work, had a beer, and we went to get some pizza. Lots and lots of pizza. 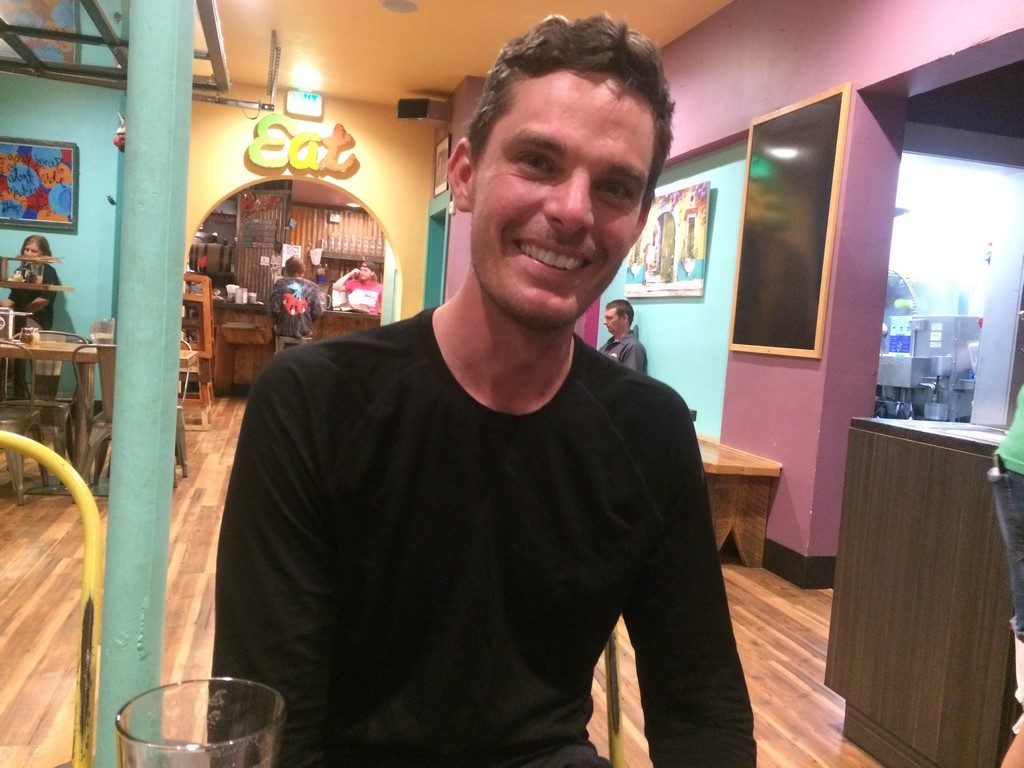 Over dinner, it was decided that I’d pack up and ride with him the next day, spend a night out, then ride back to Salida in the morning. He didn’t much care to do the climb up Fooses Creek where he’d left off, so I suggested the long and gentle climb up Marshall Pass instead. It’d cut off some of the scenery of the Monarch Crest section of Colorado Trail, but it would allow us to go without using the car or doing more hike-a-bike than what we were already in for with Segment 16 of the CT.

With the requisite trips to WalMart and dropping Marley off at dog daycare, we weren’t trail-ready until around 11am. I packed up the One Nine since it’s the most packable bike I have right now (hoping to get an Oveja Negra bag made to fit a full suspension Pivot 429 this winter). 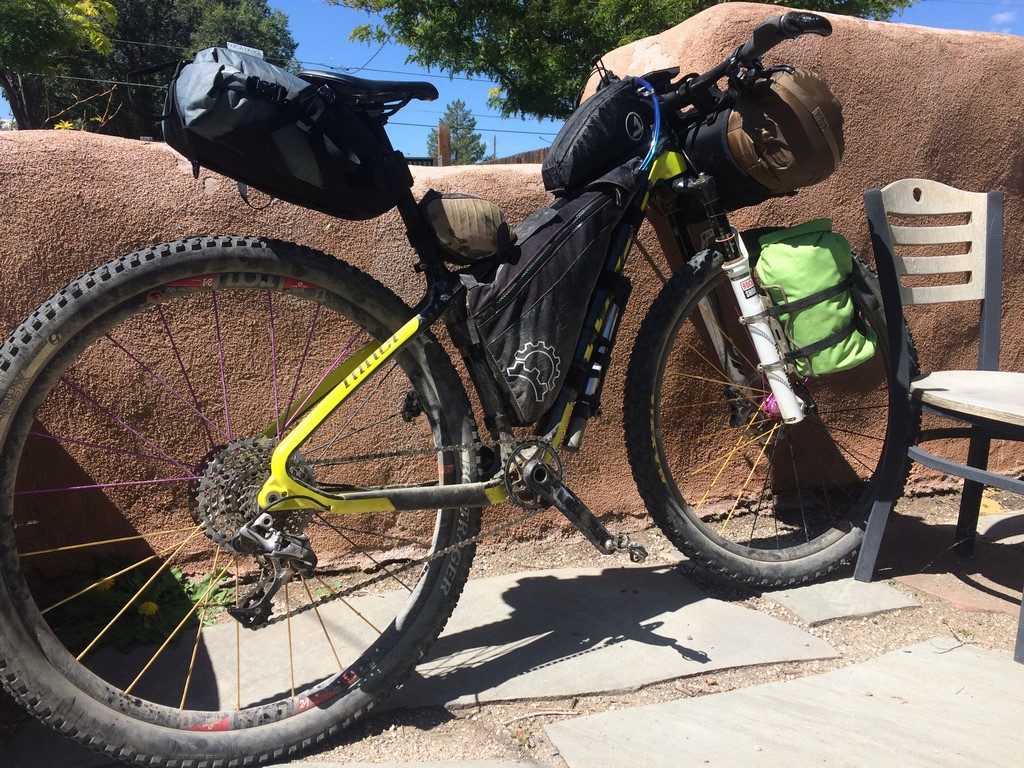 The trip to and up Marshall Pass road was a long one. We took a break about halfway up to snack 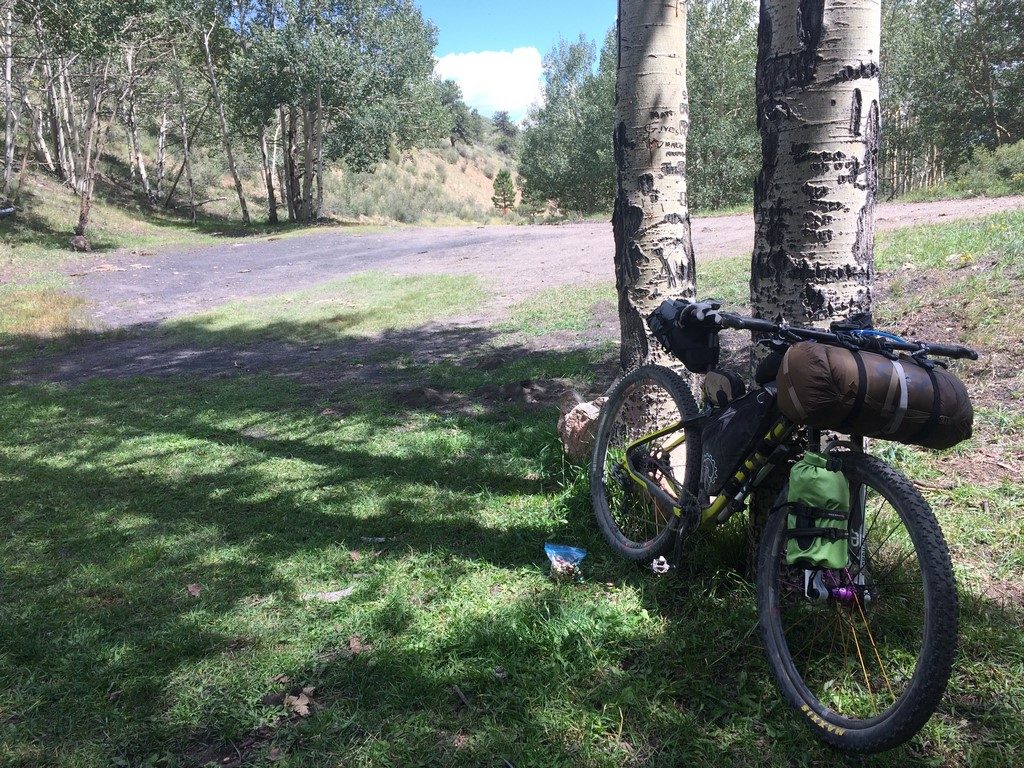 I warned Levi ahead of time that the last mile-ish at the top is always a headwind.

Our last water stop for hours was near the pass, so we filled up and headed south. 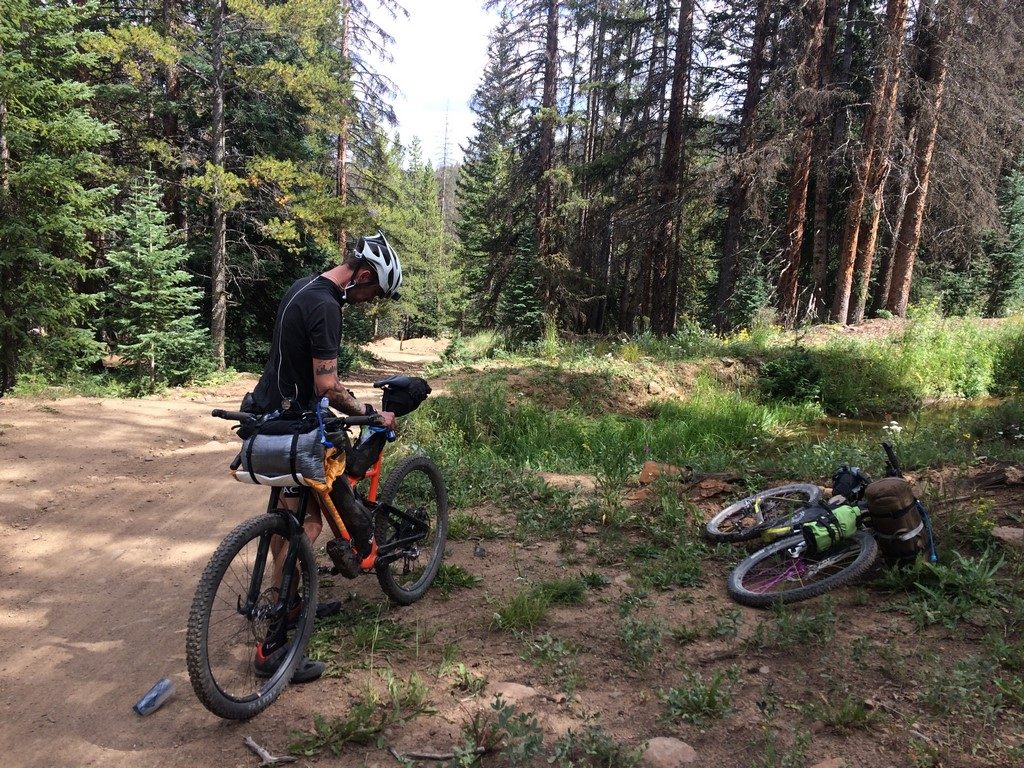 I’m really familiar with the CT from there to the Silver Creek trail that you turn off on if you’re riding the Monarch Crest route. After that, all I had to go off of was people’s reports of terrible moto-thrashed hike-a-bike. There was some of that, but there was also a lot of awesome. 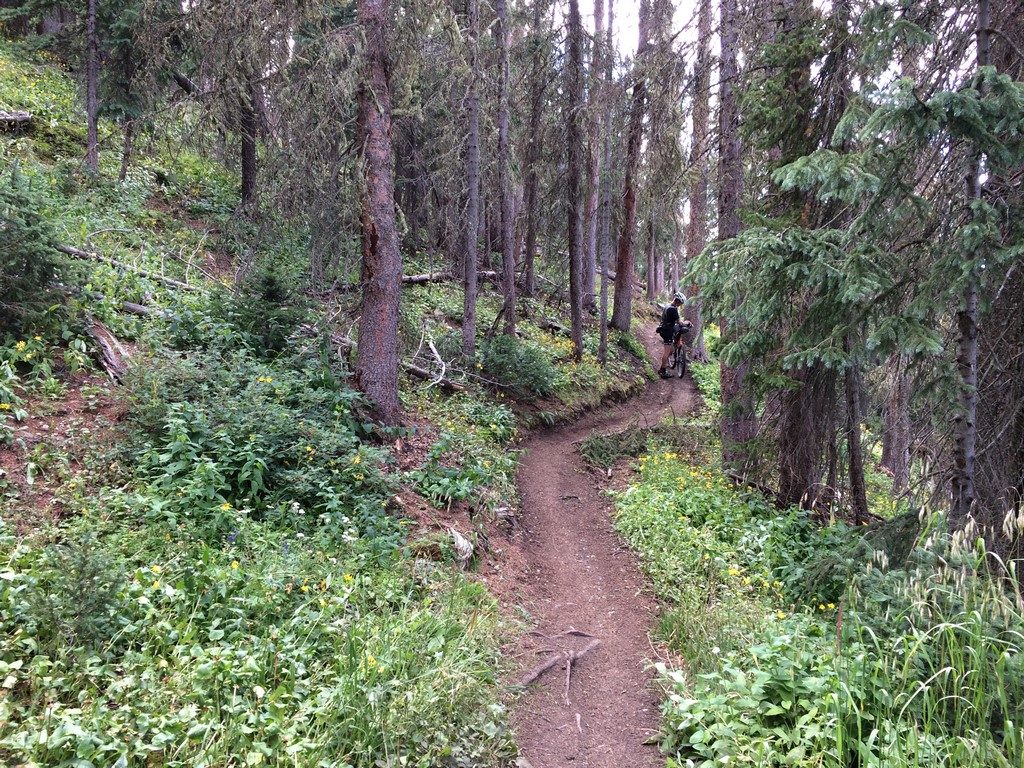 Segment 16 is burly as ufck. A loaded hardtail is not the ideal bike for the terrain, and I’d love to go back and ride it on the Switchblade. My front roll buzzed my tire at about half fork travel, so I ended up hiking down the gnarliest of the gnar. We reached Tank Seven creek after a few hours where we made our final water refill before venturing up Sargent’s Mesa. 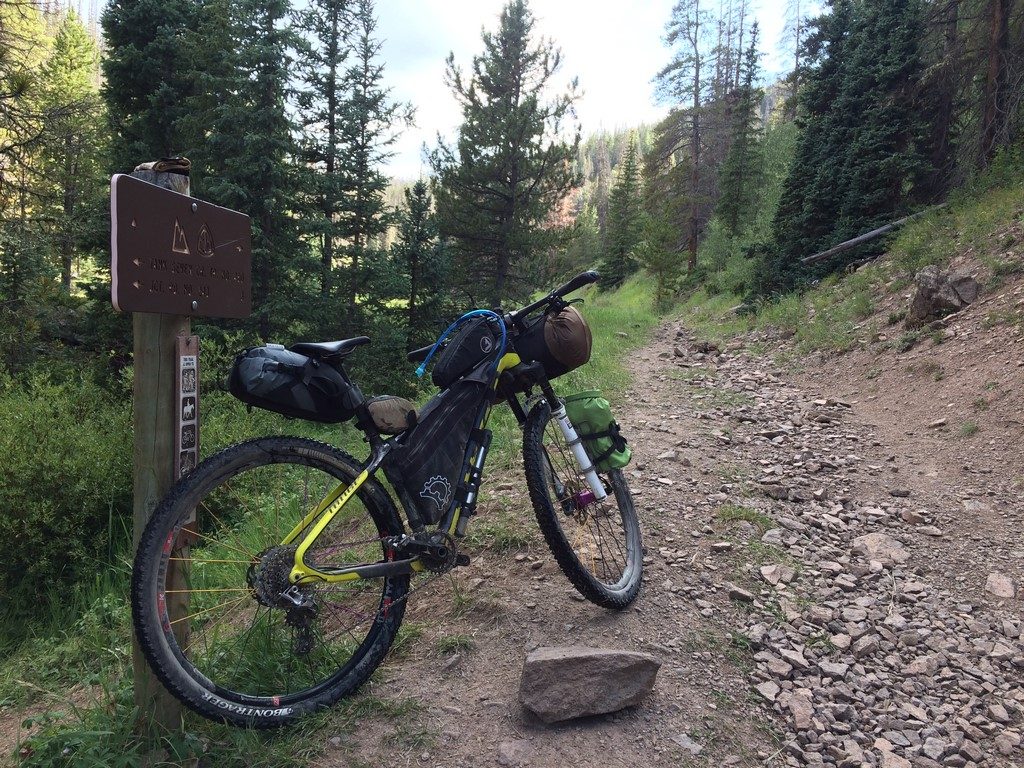 I’ve never actually experienced anything like Sargent’s Mesa. The view was totally unique to me. 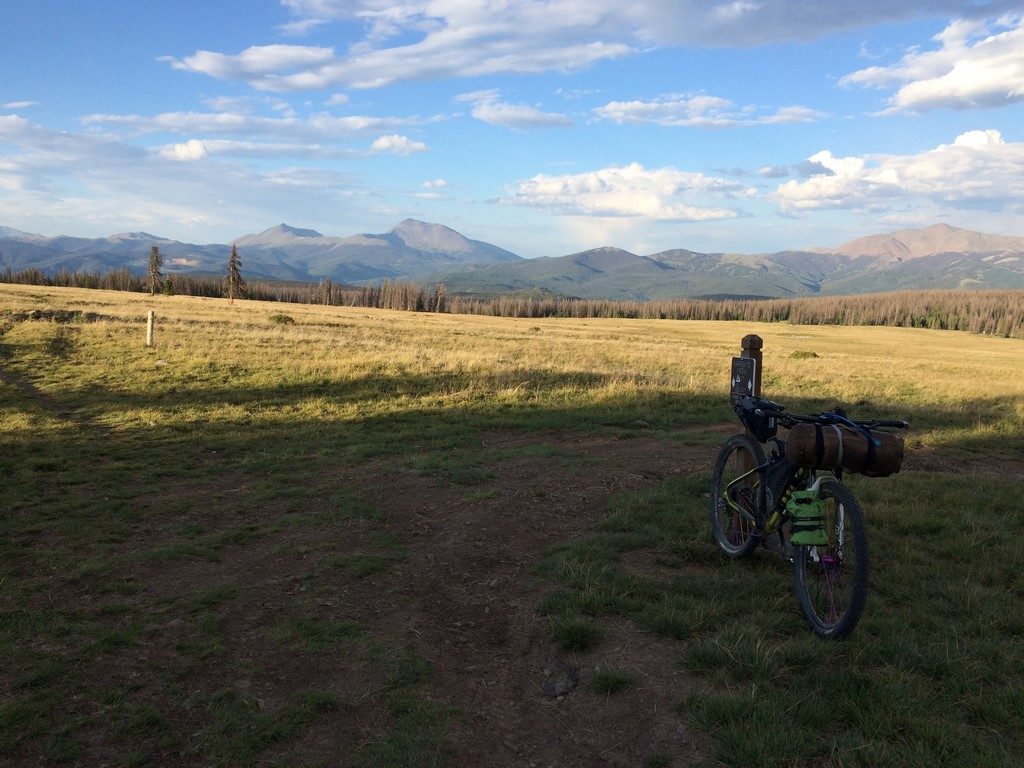 We found a spot to camp near the top right at treeline. I cooked my first camp dinner ever- ramen noodles with dehydrated veggies and a vacuum-sealed pack of salmon- one of my most memorable meals ever. It was also one of the most amazing sunsets I’ve ever witnessed. 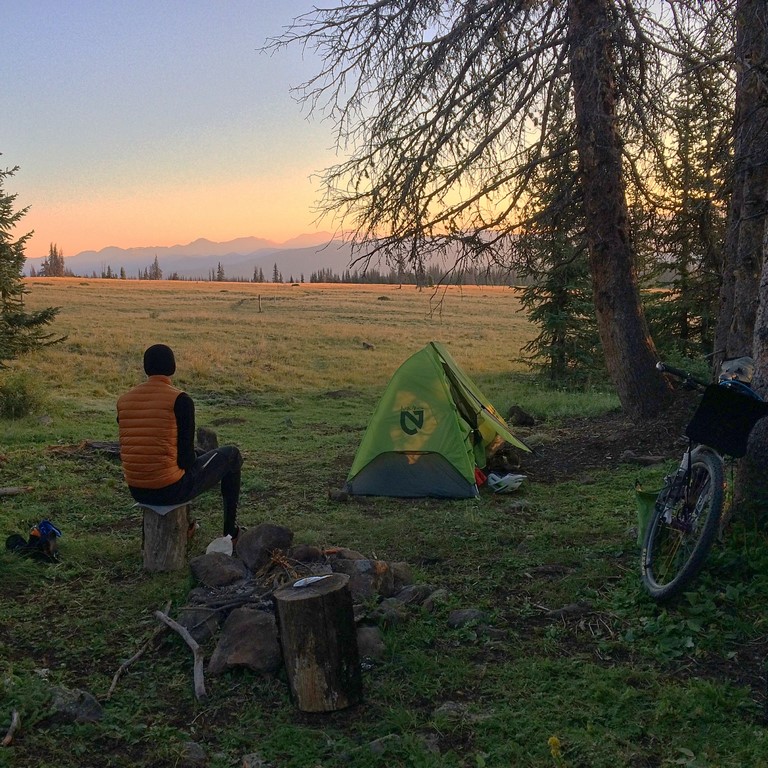 My sleep setup is dialed for the chilly weather at that elevation (somewhere over 11k feet). I can get all the way inside my sleeping bag and draw the top shut, which probably makes its 20 degree rating pretty accurate. It’s pretty hard to get out of in the morning except that I wanted to see if the sunrise was as awesome as the sunset. Close… 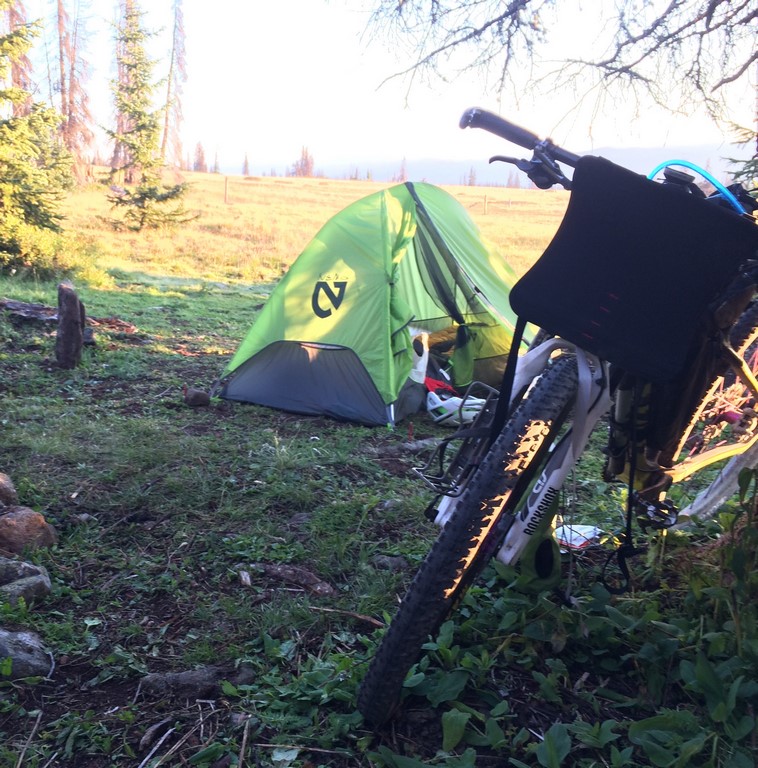 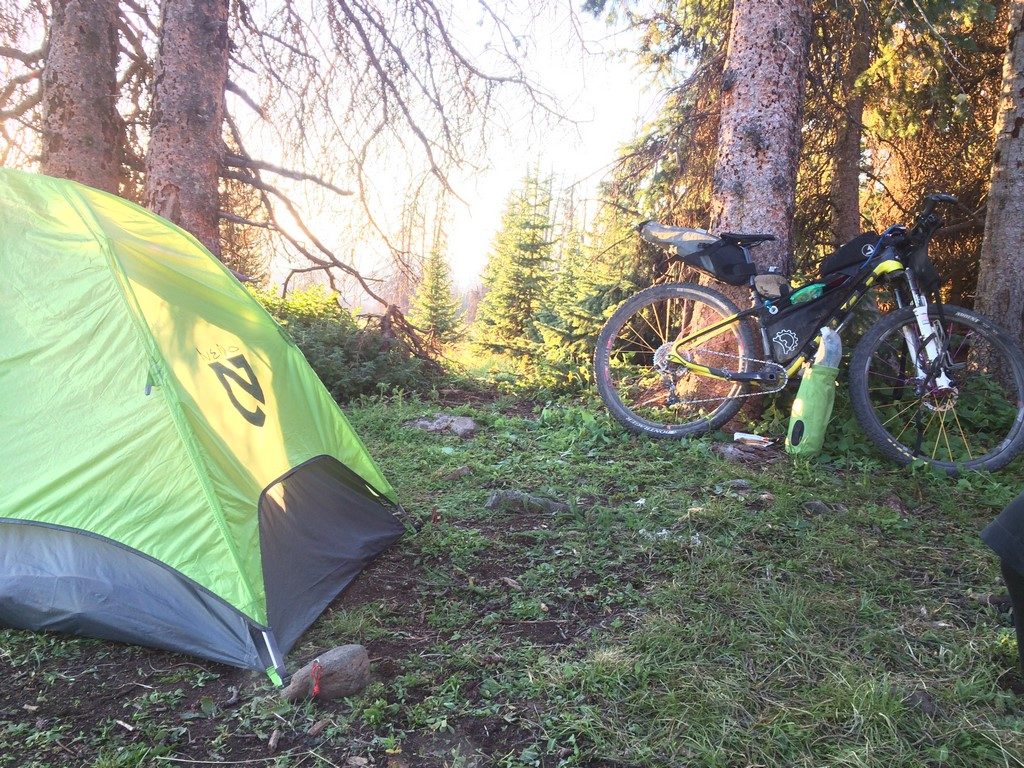 We had breakfast and headed on our ways… Levi kept trucking south and I went back down to the Tank Seven trail we’d passed before. 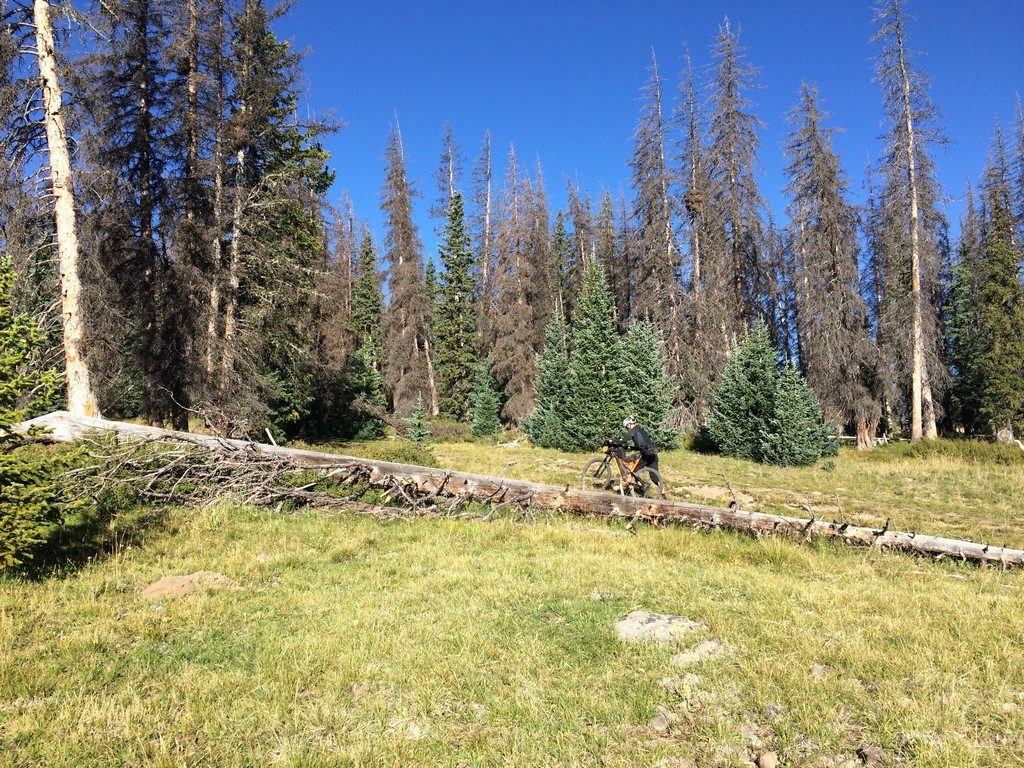 No filter… the sky here is actually that color blue.

I took Tank Seven Trail back to the Sargent’s side of Marshall Pass Road and climbed back up to where we’d turned off the day before. I rolled in to town at about 24 hours on the nose to when we’d left.

Word of advice- don’t make another trip to WalMart your first interaction with the general public following 24 hours in the peace of the woods. I went in for one small thing, and I promptly became massively overstimulated and couldn’t remember what it was once I was there.

“He who fights with monsters should be careful lest he thereby become a monster. And if thou gaze long into an abyss, the abyss will also gaze into thee.” People become what they love and hate, because their mind focuses on it.”

This quote has always had a dark undertone to me. However, I feel like it’s more positive when applied to spending prolonged time in the mountains. I came home with a strong craving to go right back.