Hop in your way-back machine and set it for the Fall of 2008. I was in the process of changing road teams (from Kenda to Metro Volkswagen), and I decided that I wanted to race a little cyclocross, but that I didn’t want to spend a lot of money on a bike, AND I wanted something that could be flipped between fixed gear and singlespeed. So, I went to Bikes Plus in Germantown and got this: 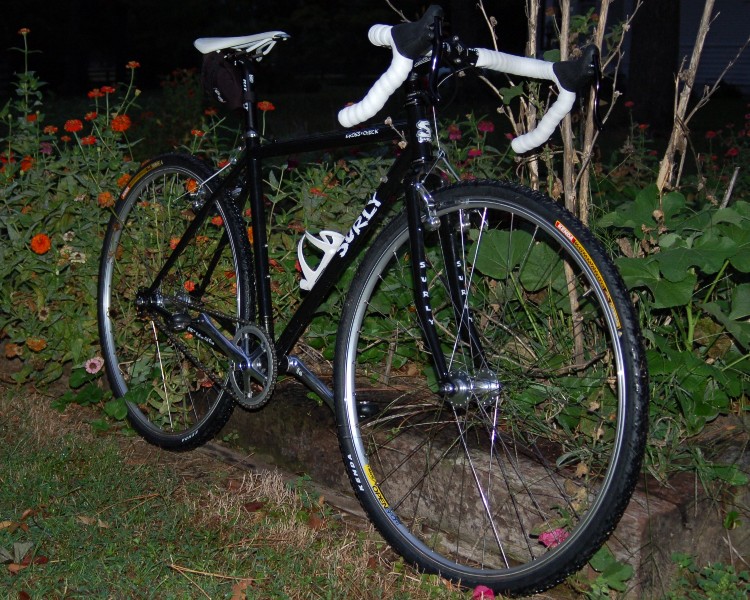 I ran it fixed gear for a hot minute before I realized that riding a fixed gear sucks ass.

Soon after, I decided that I wanted to race a gravel grinder (way before they were as popular as they are now). I set it up 1×9 with some old Shimano stuff we had laying around the house. Before you say anything… I’m not really sure what was up with that stem. It was definitely before I understood the concept of “stack and reach,” and it also had a small-sized clamp, so I think I just wanted something longer than stock (TWSS), and that’s what was around the house. 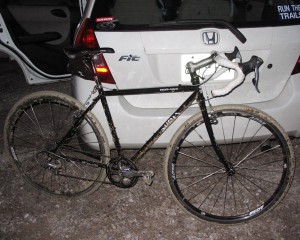 In case you were wondering, that was the first time of many I raced (and had my ass handed to me by) Cary Lowery.

In the years following, it went back to being a SSCX bike. I rode it in a SSCX race at the National Championships in Kansas City (it was a non-championship race, and I raced against the dudes… and Betsy Shogren). 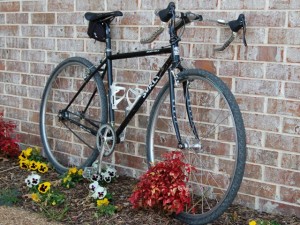 …and later it became a wannabe mountain bike with a flat bar, a Kenda Karma 2.1 on the front, and some sort of small Bontrager “mountain bike” tire on the back… 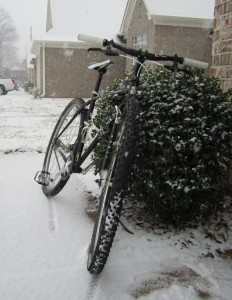 It kinda sat around for a while after that. I got really nice, pimped-out carbon cross bikes, placed 3rd in Masters Worlds a couple of times, then decided that having two full race seasons per year was no longer what I wanted to do. So, I sold the fancy carbon rides, and the Crosscheck was once again my CX steed. This time, with a plethora of “leftovers” from other bikes that had come and gone through the stable: 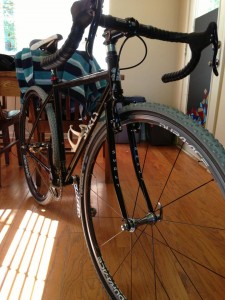 I raced it in one or two SSCX It’s basically in the same iteration now, except it’s got my I9 road wheels and a set of fat road tires on it. I use it for a good portion of road training and grocery getting now. For training, I’ve been riding it up Lookout Mountain on a 40×16. It’s a haul, but it’s been an integral part of getting ready for competition team tryouts.

I’ve alluded to it a couple of times, but, since I’m pretty limited on ride time and ability to travel because of Indy’s failing mental health, I’m pouring a lot of energy in to MMA at The Training Camp. Tomorrow afternoon, I’m trying out for the competition team. It’ll open up the opportunity to train and compete in Jujitsu, Muay Thai, and eventually, another go at MMA.

You can find bikes like the Crosscheck pretty easily now, but, at the time, there weren’t many of them. If you’ve got piles of random bike parts around your house, I’d highly recommend dropping a little cash for a frame and making it in to, well, whatever you want… as I have for the past few years as my mood, needs, and interests changed.

Posted in Around the shop, Bike Racing, MMA, Training
Hi, I'm Andrea! This blog is a journal of the highs, lows, and challenges in my constant search for adventure