It’s been a rainy summer here in the mountains. Saturday’s Breck 68 was no exception. I haven’t raced on this exact course since 2010, when it was my first singlespeed 100 (I am glad I don’t have the same strong feelings about the bump in the road that is French Gulch, since that climb is in basically EVERY Breckenridge bike race). I was happy to come back and do it over again with way more experience/fitness/acclimatization and without the 6:00am first lap start up Wheeler Pass.

It rained a lot. I packed the car in the rain, drove in the rain, picked up my race packet in the rain, set up my pit cooler in the rain… you get the idea. Not sprinkles, not storming (yay!), just a constant, steady rain.

There’s some variation of a quote about there never being bad conditions, just bad clothes. Saturday was no exception. The temperature in Breck was 50. However, on the drive to Breck, the temperature was 42 over Hoosier Pass- an elevation I’d be racing at more than once on course. It had also been raining all week in the mountains, so there was sure to be standing water and high creek crossings on course, even if the rain stopped.

So, I dressed for a day of 40s and rain. It’s really easy to cool off if you overdress and get hot. It’s wayyyyy harder to warm up in those conditions if you get too cold. I saw a lot of people dressed for an hour of 50 and rain. I also saw a lot of people DNF because they were hypothermic. I wore normal summer kit, waterproof socks, rain pants, a real rain jacket, and mid weight gloves. The gloves were my weak point. I don’t own an waterproof gloves. Later I was given the advice to put latex gloves under my normal gloves. That definitely would have been an improvement, given my issues with poor circulation. I also put a few extra things (cap, arm/leg warmers, warm gloves) in plastic bags inside my pack (my Osprey Rev pack with no reservoir) in case the isht really hit the fan, weather-wise. I don’t usually race with a pack, but in this case, it was important to carry the rain clothes if it got warmer and to carry the other stuff if it got colder. It’s a super light piece, so without water in it, it’s hardly noticeable.

I entered the Pro Women’s category because there wasn’t a women’s singlespeed category available at registration. Also, I have been turning course times similar to Pro women, and there’s usually money available for placing. Once the race started, though, I didn’t really pay attention to who was ahead/behind me. I figured it was going to be a long day, and that things would just shake out however as long as I was keeping a good pace.

First order of the course was to climb up to/over French Gulch. I swear that climb is smoother/easier since the first time I did it back in 2010. We descended American Gulch on the other side, where I had flashbacks from Breck Epic 2015 when Sara Sheets and I battled up that climb after trying to kill each other over two other mountain passes. At the bottom, I stopped at the aid station to refill a bottle and swap to dry gloves (the aforementioned bad circulation was biting me in the ass). It took some effort to get the dry gloves on because the muscles controlling my right fingers had basically stopped working, so it was like trying to cram wet noodles into a glove. One of the aid station workers rubbed my hand between hers to get the circulation back, and I was able to manage getting the glove on. It was a bad chunk of time to lose on course, but I feel like it was necessary for my hands to be functional in order for me to continue racing.

The next climb up the Colorado Trail is a tough one with an awesome downhill reward. The toughness level was increased by the number of wet roots on the steep parts. I walked a good bit. That was also the warmest part of my time on course. I removed my rain gear and stuffed it into my pack. At the bottom of an really awesome descent, I filled another bottle and headed out over the last hump of that loop (Tiger Road) before rolling back in to Carter Park and starting loop #2.

At the park, I grabbed my windbreaker out of my stuff. The rain had started alternating on/off, and it was a little windy and chilly, so it felt like the right clothing for the rest of the day. I kept my rain jacket & pants in my pack, because, even though the weather seemed to be improving, it could potentially turn to downpours at any time. I don’t screw around when it comes to weather in the backcountry.

The 2nd loop started with a hard climb up Indiana Creek to Boreas Pass. Again, I had some flashbacks from Breck Epic. Once at the top of Boreas Pass, the course goes down the Gold Dust Trail. It was there, that I had my only wreck of the day on a wet, sketchy, high-speed, off-camber bridge. If you want to hear the details, you have to listen to the latest episode of Just Riding Along. It’s funny in a self-deprecating way.

The Gold Dust Trail seems to go on forever, but I eventually made it to Como, where I fueled up in order to start the long climb back up Boreas Pass. I gathered all of my mental energy and made it my goal to have empty shells of legs at the top of the pass. That worked out really well, because I suddenly found myself approaching the aid station before I was expecting it. I could smell the barn from there, so I hauled ass over the top without stopping.

Somewhere on the last singletrack, another singlespeeder caught up to me. I asked if he wanted to get by, and he mentioned that we were racing each other. I told him that even though I was singlespeed, I was definitely entered in the Pro category. Fun fact of the race I figured out later- I ended up finishing a little less than 1 min behind him. If I had turned on “ludicrous speed” for the last downhill and beaten him instead of staying “conservative” and letting him by, I would have been 2nd singlespeeder of the day behind Dan Durland.

Looking at the results page for just the 68 mile race (not the 100 or the 32), here are your rain/cold Did Not Finish/Start (DNF/DNS) stats:

43 Finishers
4 DNFs during the 1st lap (started the course and quit before the end of the 1st lap)
26 DNFs who finished a 1st lap and didn’t start a 2nd
16 DNSs (people who looked out the window that morning and were like, “Nah”)

Hopefully some of those 46 people can read this and take it as advice on dealing with the weather. I’ve been hypothermic more than once in the middle of summer in Colorado, so I’m coming from a place of lots of personal experiences in doing it wrong.

I ended up 2nd overall woman by about 14 minutes. 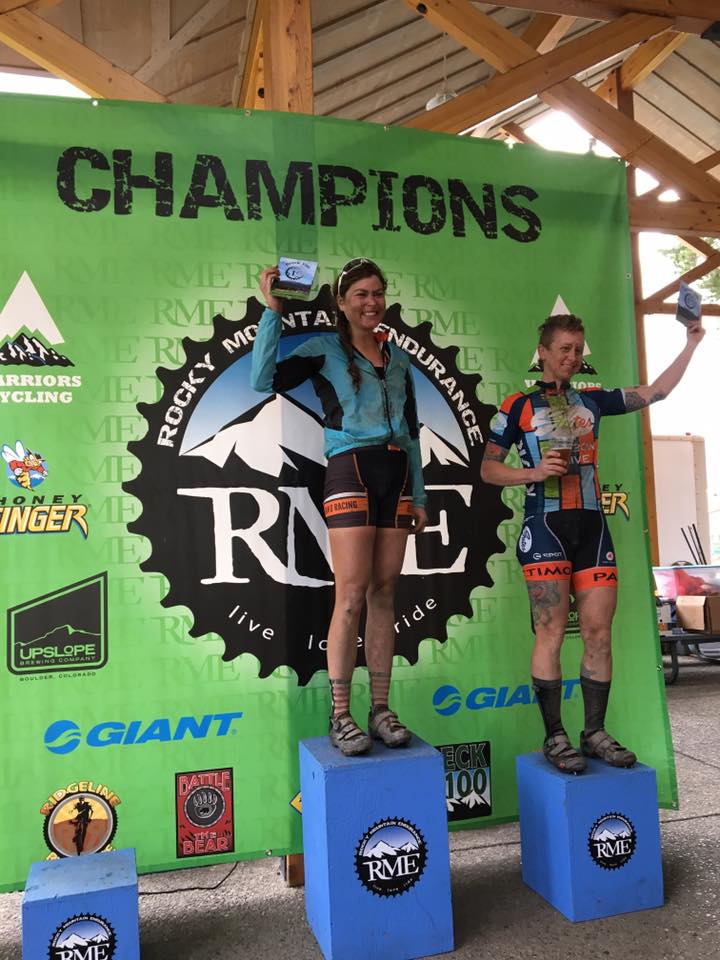 Carbon Drive is really awesome in those conditions. The only complaint about my drivetrain was the freehub on the Stan’s Neo Ultimate rear hub. It was popping/creaking during the race, and making me feel like it was going to catastrophically fail at any point. When I took it apart on Monday, I found that the rubber seal between the hub shell and freehub body had failed to keep mud out. The low points of the drive ring were filled with mud, and the lubricating grease had become mud-fouled as well. I cleaned/re-lubed everything, but I don’t know if it caused permanent damage. After years of Industry Nine reliability, I’m not at all impressed with the performance or reliability of the Neo Ultimate hub.

I’m still pretty shelled from the effort. It was a really nice hard day of training for Vapor Trail 125, though.

Posted in Bike Racing, Training
Hi, I'm Andrea! This blog is a journal of the highs, lows, and challenges in my constant search for adventure